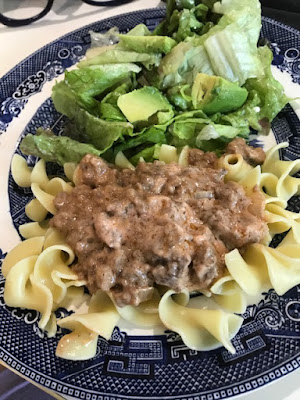 We’re always happy to welcome back award-winning author Judy Alter. After a long career writing historical fiction about women of the nineteenth century American West for adults and young adults, Judy began writing contemporary cozy mysteries. She now has three series as well her current release, a standalone—which may eventually wind up being the first in a new series. Judy currently lives in a small cottage with a postage-stamp sized kitchen without a stove. So, she wrote a cookbook about it, Gourmet on a Hot Plate. Today Judy shares a recipe that plays a part in her latest book. Learn more about Judy and her books at her website.

Let’s Hear it for American Food

When Henny James tries to add hamburger Stroganoff to the menu her chef/boss Irene Foxglove will cook on the TV show, Madame, a French-ish snob about cooking, is indignant that she would be asked to cook with ground meat, the stuff peasants eat. Stroganoff is traditionally made with beef tenderloin, which is expensive; if you want to cut corners, you can use a cheaper cut and simmer it a long time. Henny points out that hamburger is both quick and inexpensive, which will appeal to American cooks. Besides, it retains all the flavor of the original Russian dish.

But this incident in Saving Grace illustrates a larger theme in the cozy mystery—the return of American food to popularity in a nation that has wildly embraced everything from Japanese to Middle Eastern cuisine. In the Sixties and Seventies, James Beard, himself a French-trained chef, was the spokesman for the American menu, pointing out that it is, like the nation, a melting pot of international cuisines. But Beard died in 1985, and no one major took up that banner. International cuisines—please don’t call them ethnic, which is a bit derogatory—became the fashion. Today, that trend is reversing, thanks to some prominent TV chefs and such enduring publications such as Southern Living.

So what is American cuisine? It’s hard to define because it encompasses so many regional cuisines—southern, Cajun, southwestern, Pacific rim, etc.—and incorporates many cooking techniques, from Native American to European (yes, Madame, and French!). If there is one key to American food, it is variety. Among the most popular dishes are cheeseburgers and hot dogs, nachos and barbecue, po’ boy sandwiches and fried chicken, apple pie and s’mores. See a pattern here? They are all accessible dishes, easily duplicated by the home cook, and the ingredients are readily available in most grocery stores. No need to go on a desperate search for gochuchang (a red chili paste) or truffles (a French delicacy). Hamburger Stroganoff fits right in as an American dish.

Mix sour cream, tomato paste and Worcestershire sauce. Stir a spoonful of hot beef mixture into the sour cream, and then stir the whole thing back into the meat. DO NOT LET IT BOIL. Mix thoroughly and stir to warm the sour cream.

Serve immediately, either over noodles or separately. 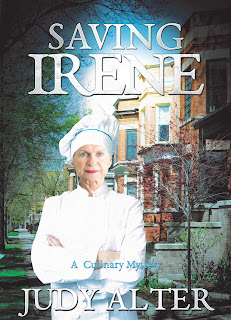 Irene Foxglove wishes she were a French chef. Henrietta James, her assistant, knows she is nothing more than a small-time TV chef on a local Chicago channel. And yet when Irene is threatened, Henny tries desperately to save her, wishing always that “Madame” would tell her the truth--about her marriage, her spoiled daughter, her days in France, the man who threatens her. Henny’s best friend, the gay guy who lives next door, teases her, encourages her, and shares meals with her, even as she wishes for more.

Murder, kidnapping, and some French gossip complicate this mystery, set in Chicago and redolent with the aroma of fine food.

Thanks so much for letting me tell everyone about Henny and her adventures on this, the launch day for Saving Irene. Love being back on one of my favorite mystery blogs!

Always a pleasure to have stop by for a visit, Judy!

They both sound great: the book and the stroganoff!  I'll have to try both of them.

Thanks Judy and Anastasia

Thanks, Sandy. And I'm looking forward to Death in the Time of Pancho Villa, which I just ordered.