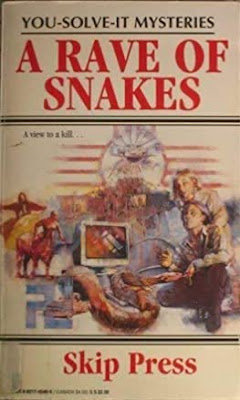 Do you remember reading You-Solve-It Mysteries or buying them for your kids? Today we welcome screenwriter and author Skip Press, who wrote some of the original books in the series. Learn how they came about and what the characters’ next iteration might be. He’d love your input. Learn more about Skip and his books at his website.

Can a Character Live Forever?

From the title of this article, you may have thought of great fiction characters from history. Maybe a Shakespearean character like King Lear, a play made into a movie many times but also contemporized as A Thousand Acres in 1987, or Sherlock Holmes. How many movies have been made starring the Baker Street detective, even as a youth in Young Sherlock Holmes in 1985? Mark Twain kept Tom Sawyer going with novels like Tom Sawyer, Detective. How often have the Hardy Boys or Nancy Drew been adapted to movies or TV? I did a book with Flint Dille, who with his sister owns the Buck Rogers franchise. Recently, there was a new series announced in a Hollywood trade paper about a new Buck series. Hope it happens – I love the character.

I have a similar situation, and so solicit any and all opinions about it. In 1987, my then agent Larry Sternig suggested I create a series character for the new spy magazine, Espionage. I ended up with a deal and a poster of the first cover with my name on it displayed in the New York City subways. The magazine only lasted a few issues, but my character Alexander Cloud stayed in my mind. An employee of the National Security Agency, he was unique with his psychic abilities that included a knack for finding anyone.

I wrote enough stories with Alex that it impressed a filmmaker I knew, and I was paid to write a screenplay starring Alex, who was half-Hopi and based in New Mexico, the Land of Enchantment. The worldwide scope of the script – something dictated by the producers – was apparently too wide, and they didn’t get the money to make it. So, the option on the screenplay expired and I got the rights back.

Fast forward a few years. I was a member of Poets, Essayists, and Novelists (PEN. A new friend I met there, Aram Saroyan, told me that a publisher was looking for a series character for their new You-Solve-It Mystery young adult line. All I had to do was write a sample chapter and outline. What to do? I was by that time married and a Mr. Mom, writing at home and watching our son Haley Alexander while his mother worked a 9-to-5 job. I needed this deal. I figured Alexander Cloud must have been an interesting teenager, so I made him one. He was on the basketball team at Albuquerque North High School, and in his spare time he kept getting pulled into solving mysteries with his constant pal and maybe someday girlfriend, blonde-haired spunky, cute computer geek Jilly Adams.

No matter how much he tried to stay out of trouble and not upset his Scottish mother and Hopi computer executive father, Jilly always dragged Alex into solving crimes.

I got a three-book deal. The first one, A Rave of Snakes, was the lead series title. I used family holiday season trips (her family in West Virginia, mine in Texas) to research the second  novel. For A Web of Ya-Yas, I took us up Highway 666 in New Mexico and wove some things I saw into the story. With the next one, A Shift of Coyotes, I used information from my friend David Ayer, who was fluent in Spanish and managing a maquiladora across the border in El Paso. This was long before he wrote Training Day or made movies.

The novels did well. In the mid-90s, they were optioned by the production company owned by Ed Gaylord, who at that time owned The Nashville Network (which became TNT). Then, the executive running the company got in a fight with Gaylord, and my planned series never happened. Later, the novels were optioned by Moctesuma Esparza, who made many movies including Selena. He had a deal at Disney, but after he asked me to change Alex to a Mexican-American, the whole thing fell apart. I felt Native Americans were under-represented and Alex should maintain his native charm.

Now we’re at today. It has occurred to me that Alex and Jilly are all grown-up, may still be friends, and might even be married. They would both be about forty years old. I have a complete story worked out that takes place in San Francisco and has a “natural world” type of title. It’s a better story than any I’ve ever come up with for Alexander Cloud.

I wonder – should I try to weave in excerpts/memories from the old young adult stories? Should I just write the new novel and maybe touch up the old novels, publish them myself, and sell those as a set? Should I also put the old Alex Cloud NSA agent stories into a book? How about novelizing the screenplay I wrote?

I own the rights to all of these, so I could do everything. Still, it’s a bit of a puzzle to me, thus I welcome your opinion. It’s my own you-solve-it mystery, and I value your advice! The End, or a New Beginning? 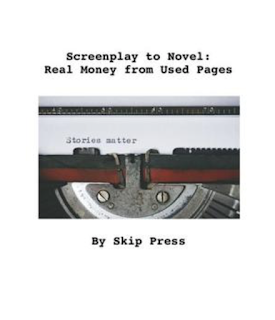 Screenplay to Novel: Real Money from Used Pages is a ten-step guide to turning any screenplay into an excellent novel that you can sell, whether the script sold or not, by the author of the Complete Idiot's Guide to Screenwritng, who has had more than fifty books and novels published and with publications and classes has taught half a million writers to be more profitable.