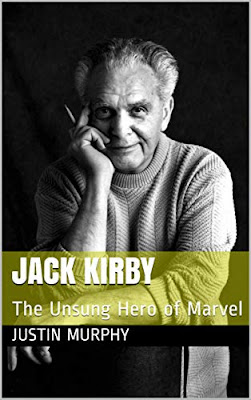 Whether fiction or nonfiction, Justin Murphy explores many themes in his work, including probing into the darkness of pure evil and exploring obscure figures often forgotten in entertainment. Today he returns to tell us about his latest unsung hero, Jack Kirby. Learn more about Justin and his books at his Facebook Author Page.

Like the first release of my Unsung Hero series covering the life and career of forgotten Star Trek writer Gene L. Coon, another installment focuses on Marvel co-creator Jack Kirby. Stan Lee spent decades promoting himself as the face of the comic book publisher, later to be a Disney owned Film and TV juggernaut. Yet Kirby was the workhorse who developed most of these beloved characters, based on Lee’s initial concepts.

His first well known creation on the brink of World War II resulted in a patriotic hero named Captain America. Published by Marvel’s earliest forerunner, Timely Comics. Co-created with Joe Simon, the superhero openly fought Nazis, including the villain Red Skull. It sold one million copies and paved the way for the two creators to have much success writing and drawing comics well into the 1950s.

Kirby drew and developed characters for Marvel and its then more well-known competitor, DC Comics. In fact, some instances of work for the former outlet were retools of titles he worked on at the latter. Such examples would include creating different interpretations of Thor for both publishers. Along with redressing DC’s Challengers of The Unknown as Marvel’s The Fantastic Four.

In fact, he drew and developed a concept for an early version of Spider-Man. Though Stan Lee derided his version as ’’Captain America with cobwebs.’’ It later got turned over to horror and suspense comic artist Steve Ditko, who retooled the character into a teenager with a lean, more human-like bone structure. Kirby wrote characters named ’’Peter Parker’’ and ’’Peter Parr’’ for decades prior to Ditko’s finalization of him as the friendly neighborhood web slinger. Yet felt the latter deserved most of the credit. However, two groups of superheroes cemented his legacy with Marvel. September 1963 saw the release of both to the comic book world.

One formed a team of established superheroes, Thor and Captain America and such characters as Iron Man, The Hulk, and Ant-Man. Considered ’’Earth’s Mightiest Heroes’’, they joined forces to fight many of Marvel’s greatest villains in a manner similar to DC’s Justice League of America, the competitor’s top selling title. The Avengers were designed as Marvel’s way to combat this. Decades later, they formed the nucleus of Disney’s Marvel Cinematic Universe and now outshine the competition on all media fronts.

The other group in question were also formulated to compete with DC’s Justice League but in a much different way. Kirby created a new batch of characters with special abilities. None of them were affected by gamma rays or bitten by a radioactive spider; they were born mutants. Led by Professor Charles Xavier, they were a group Stan Lee and Jack Kirby named The X-Men. The artist got involved with creating the original five superheroes, Cyclops, Jean Grey (originally Marvel Girl), The Beast, Archangel, and Iceman. This initial batch didn’t prove as successful as later versions but paved the way for such heroes as Wolverine.

Jack Kirby died in 1994, but his legacy is felt with film and TV adaptations of the above comics.

The Unsung Hero of Marvel

Many recognize Stan Lee as the face of Marvel. Yet Jack Kirby is the one who did a lot of the hard work in creating such heroes as Captain America, Iron Man, Thor, The Incredible Hulk, and Ant-Man. While Lee was the public face for what became the multimedia brand, Kirby’s legacy is relegated to the shadows. Much like Bill Finger of Batman and Gene L. Coon of Star Trek, this man doesn’t get enough credit. A man who gave everything to the comic book industry. This book hopes to shed some light on his life and career.