#CRAFTS WITH ANASTASIA--AUTHORS SUPPORTING HERO DOGS (AND SOME CROCHETED CATS!) 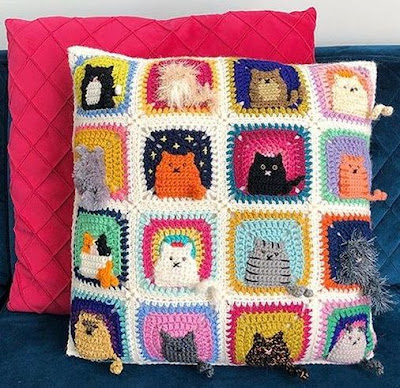 Today we’re happy to have sci-fi, fantasy, and paranormal romance author Melisse Aires stopping by to tell us about the newest Pets in Space anthology, which raises money for Hero-Dogs.org. Learn more about Melisse and her books at her blog and website.

I am excited to be part of the Pets in Space 6 anthology. All the sci-fi romance stories in this anthology involve a pet, and we donate to a worthy charity, Hero-Dogs.org.

I am owned by a small, fuzzy dog and two tortoiseshell cats. I have lived with pets my whole life and can’t imagine not having a pet!

Since Pets in Space 6 is a sci-fi romance anthology, I let my imagination go wild while creating “Stranded on Grzbt.” I ended up with Velvet, a tiny lab-created cyber mouse with an elephant-like trunk. She is called Nanosnoot.

Velvet has a large part in my story as she helps Mimi and Kyre, my young couple, rescue themselves and their companions from a nefarious kidnapper’s spaceship. As I was writing, a pack of cat-aliens popped up! Luckily, they can communicate by telepathy and consider tiny Velvet a member of their pack. While Velvet works wonders on the spaceship’s computer system, the cats (referred to as Murder cats by the Earth women) provider scouting and ‘muscle.’

Pets provide joy and assistance in my story. And it is just one of the great stories in Pets in Space 6.

In addition to writing, I like to crochet. I found this wonderful cat square pattern, perfect for people like me with bins of leftover yarn. Hmmm, I could do space backgrounds!

I contacted the creator, Pony Mctate, about sharing, and she was very gracious. Here are links to the pattern: 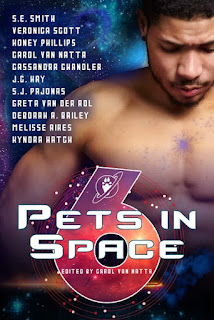 A limited-edition anthology featuring 11 original, never-before-released stories from some of today's bestselling Science Fiction Romance, and Fantasy authors, Pets in Space 6 continues their vital support of Hero-Dogs.org, the non-profit charity that improves quality of life for veterans of the U.S. military and first-responders with disabilities.

Pets in Space® authors have donated more than $15,300 in the past five years to help place specially trained dogs with veterans and first responders. 10% of all pre-orders and the first month’s royalties of Pets in Space 6 will again go to Hero-Dogs.org.

With the help of her two innovative pets, a human woman rescues an alien General and becomes part of the revolution he is leading.

Reliving the same terrible day, Raelyn and her pet are in a race to save the interstellar cruise ship.

The Cyborg with no Name by Honey Phillips

Can a rogue robotic horse and a misfit mechanical dog protect a wounded cyborg and a lonely scientist from a vicious new enemy?

In a dangerous asteroid mine, space griffins may be the key to escape for a pirate clanswoman with vital secrets and a wanted fugitive with enemies hot on his tail.

The Department of Homeworld Security series

She wanted to find aliens—and discovered much more than she bargained for!

See How They Run by JC Hay

In microgravity, even the heaviest heart can fly.

Suri’s Sure Thing by S.J. Pajonas

Suri and her dog, Finn, are an inseparable pair, and they both suspect her ex-boyfriend is up to no good in this best-friends-to-lovers romance.

Can a freighter captain and an academic outwit their pursuers and get a little alien foundling back where she belongs?

Worlds of Fire: Metamorphosis by Deborah A. Bailey

An alchemy apprentice doesn't think much of her gargoyle shifter mentor – and his pet – until she finds he's just the person to help her when a transmutation spell goes wrong.

Stranded on GRZBT by Melisse Aires

Can a resourceful human trust the alien determined to help her and her companions?

Before The Fall series

An alien interrogator recognizes the human prisoner as his fated mate, leading to danger for both of them.

Thanks so much for letting me visit about Pets in Space 6!