Lorie Lewis Ham has been writing most of her life. For the past eleven years, she’s been the editor-in-chief and publisher of Kings River Life Magazine, and she produces Mysteryrat’s Maze Podcast where you can now hear an excerpt of her new book One of Us. Today Lorie joins us to talk about the role food plays in her new series. Learn more about Lorie and her new book on her website mysteryrat.com where you can also find links to other social media.

Experiencing the Food in One of Us

My new book, One of Us, is the first in a new series featuring Roxi Carlucci, who by the end of the book has become a part time P.I. and podcaster. It is set in one of my favorite places, the historic Tower District in Fresno, California. The Tower District is the cultural hub of the area and is filled with theatre, art galleries, music venues, interesting shops, and a lot of great food!

Roxi and I both love the food in the Tower District. For Roxi, who has just moved there, it is a new experience—one that I enjoyed being able to share with Roxi and with readers.  And of course, much brainstorming about the murder investigation takes place over food or coffee! The Tower has a very unique feel—like you have just gone back in time. Here is what Roxi had to say about it:

“As we walked to the heart of the Tower and its many shops and restaurants, I felt like I'd gone back in time. I had read in an article that most of the houses had been built between the 1920s and the 1950s. There wasn't a new house in sight—each home had the kind of character only houses built before the 1960s seemed to have. The streets were lined with various kinds of tall trees. Even the sidewalks had a bit of character with its cracks and unevenness here and there.”

With that setting in mind, go with us to my favorite place to eat there, Irene’s Café, where you can find one of the best turkey burgers anywhere.

Irene's was on a corner and had tables both inside and out. The bright yellow and medium blue colors were cheerful and welcoming, and there were painted palm trees all over the walls. It probably wouldn't have suited Gordon Ramsey's taste, but to me it was perfect. Heavenly diner smells hit my nose the second we walked through the door. It was a small cozy place—typical diner style with faux brown leather booths and a few tables by the window and around the corner. Like much of the Tower, it was like stepping back in time.

Roxi also gets the best Chinese take-out in the Tower from Golden Restaurant, which has been featured in Kings River Life. Their orange chicken is amazing, and with every dish, you get enough food for two meals, and who doesn’t love leftover Chinese! Since she and her PI cousin Stephen are so busy investigating the murder in the book, they get a lot of take-out and another popular place is Pacifica Pizza, said to have the best pizza in the Tower, and being Italian, Roxi knows her pizza! They also get their donuts (what investigation can function without them?) from Supreme Donuts.

There are two coffee shops in the Tower, not counting Starbucks, that Roxi and I both frequent regularly—The Revue, and Hi-Top. The Revue has a more classic coffee shop feel that fits right in with the historical setting of the Tower, while Hi-Top is the modern industrial style that has been popular with coffee shops the last few years. The Revue serves a great mocha latte, and I have enjoyed many an Earl Grey tea at Hi-Top.

While Roxi doesn’t do much cooking, her cousin Stephen is an excellent cook. Stephen cooks up meatloaf and spaghetti during the times they aren’t too busy. He also treats them to many cups of Peets coffee as they pour over clues.

A restaurant in the book that was created for the story is Frank’s Place. While there is a Frank’s Place in Fresno, the real one is a music venue downtown. One of the suspects is the chef at Frank’s Place and Stephen and Roxi go there to speak with him. It is one of the more upscale places in their version of the Tower District.

As the series continues, I look forward to sharing more of the wonderful food of the Tower District with my readers and with Roxi, and I hope if you are ever in Fresno you will check it out for yourself!

My new book, One of Us, is available on Amazon, on the Nook at Barnes and Noble, and Kobo. 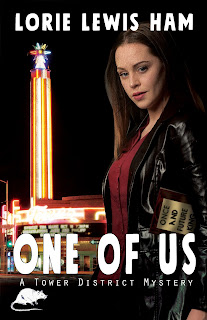 At thirty-five, children’s book author Roxi Carlucci finds herself starting over again after her publisher drops her book series. With no income, she has to pack up her life on the California Coast, along with her pet rat, Merlin, and move in with her cousin, P.I. Stephen Carlucci, who lives in Fresno, California. The one redeeming factor is that Stephen lives in the Tower District—the cultural oasis of Fresno.

Stephen talks Roxi into helping out with a community theatre production, which is also a fundraiser for a local animal rescue. Then someone is murdered during a rehearsal in the locked theatre, and now she and Stephen are hired to find the killer. The killer has to be one of Roxi’s new acquaintances since the theatre was locked at the time of the murder, but no one seems to have a motive. How can they solve a murder without a motive? Could the local gossip website hold any clues? Can they stop the killer before they strike again?

Thanks so much for having me here today!

You're very welcome, Lorie. Good luck with the book!