Today we sit down for a chat with suspense and paranormal author Alicia Dean. She wrote her first romance at age ten (featuring a hero who looked just like Elvis Presley), and she still has the tattered, pencil-written copy. Learn more about her and her books at her website.

When I was a child. I wrote my first romance at age 10.

Usually in my living room recliner, but I love to get away and write in other locations when I can, preferably a secluded cabin in the woods…as long as there are no serial killers in the vicinity.

I like either silence, or rain sounds. Not music.

Only bits and pieces. I try not to put too much of myself into characters, but I know that most authors, whether they intend to or not, usually do. The plots are not drawn from real life at all.

Most of the time, I look up baby names and see which names seem to fit my character. Sometimes, I like to give my characters a name that has meaning, even if it’s just meaningful to me.

Both. I prefer fictional since I can mold it to fit my needs and I don’t have to worry about accuracy.

Well, this isn’t really a quirk, but the protagonist in my current work in progress has a condition called ‘Misophonia’ which translates to ‘hatred of sound’ wherein certain sounds, mostly eating sounds like crunching and smacking, trigger an uncontrollable reaction—part of which is rage and disgust and the desire to flee.

I actually have Misophonia. I’ve suffered from it all my life and didn’t know it was an actual condition with a name until a few years back. I always thought I was just picky and neurotic.

Probably Gone with the Wind. It’s my favorite novel which, of course, was made into a fabulous movie and both have been loved by generations. The characters and the plot were gripping.

I would have seriously pursued writing much sooner and stuck with it.

See above. 😊 Crunching, smacking, and other sounds like people brushing their teeth, jiggling keys, pen clicking, rocking in a chair (yes, it’s weird, but those things drive me nuts…)

Books, coffee, Elvis music. (Would I have power? :D)

I was once a Telemarketer. I hated it…it didn’t last long at all. Not only do I hate talking on the phone, period, I also hated encroaching on people’s time and having to be so aggressive in trying to get them to buy the product. I also had a supervisor breathing down my neck and admonishing me for not being forceful enough. Miserable!

Gone with the Wind. Although, since it’s also the book I mentioned that I wish I’d written, I’ll add a few other standouts, like the Bosch series by Michael Connelly and Mystic River by Dennis Lehane.

Mountains. (Although, if it’s an ocean where it’s cold, I’d pick ocean 😊)

City, all the way!

I’m working on a police procedural that I hope to finish soon. And I have three series for which I need to write sequels. I’m also working on a Friday the 13th story to be released on Friday, May 13, which is part of a project I’m doing with 12 other authors…get it, 13 total? 😊

Liberty Awakened is one of many of my books I’m re-releasing through The Wild Rose Press. They are getting all new covers, and I absolutely love the new looks. I’m also an editor at Wild Rose, and I love being published with them.

Thank you so much for having me as your guest! 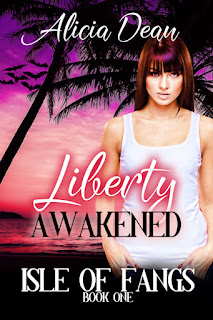 Liberty Delacort doesn't believe in Vampires. Then she meets the father she never knew, just before his death, and learns she's the last of the Van Helsing bloodline.

Eli, a 300 year old Vampire, doesn't believe Liberty has what it takes to stand between the humans and the Evil Ones on Sang Croc Island, and orders her back to the mainland.

Ryan, a friend of Liberty's late-father, disagrees and insists that Eli provide the promised training.

Now the Full Moon has come and Liberty must stand in the gap. But unbeknownst to her--she's fallen for the wrong vampire.

Great interview Ladies!
I'm always amazed to find out more about the authors I know and admire.
I can't listen to music either when I'm writing but I never thought about water or rain sounds. Might have to give that a try.
Good luck and God's blessings with your books.
PamT

Thanks so much, Pam!

I loved the post! My husband has misophobia, too.

I'm loving that ocean or mountains comment. She'll go anywhere as long as she doesn't have to take off her shoes. ahahhahahah. I love this, Alicia. The cover's fab.

Wow, Kara. I'm amazed, since I identified the actual condition, how many people I run across who has it. I feel for your husband, and for you. :)

Hahaha, yes, you know me so well, Kathy. No barefooting it for me!! Thanks, I'm very pleased with the cover.

What a terrific interview and post. I don't know how you manage to do everything--both editing and writing. Your are one busy gal Best of luck with all your projects and with the sale and promotion of your books.

Thank you, Judy. Yes, all those things do keep me busy! :) But I enjoy it, so I manage.