Our guest traveler today is author Sharon Garner. Sharon lives in Pennsylvania, but her heart is divided between Hawaii and England. Pele’s Tears is her fifth published novel and is available through Amazon, B&N, and other online venues, as well as bookstores and libraries. To read the first chapter, visit Sharon's website. -- AP
Aloha!
I hope readers will hear the drum-heavy theme song of Hawaii Five-0 and “Book ’em, Danno” when they read Pele’s Tears, a romantic suspense set on a flower farm on Kauai. Hawaii is “in” with the retooling of the popular TV series.
Kauai is the oldest of the Hawaiian Islands and is known as The Garden Isle because of its plant-loving climate. Elvis’s film Blue Hawaii was filmed here. Every direction you turn on Kauai, there’s something to see. 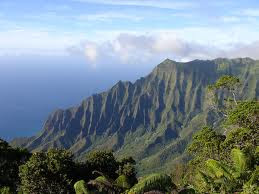 The North Shore is the Na Pali coast. All roads end on either side of 17 miles of what I call “folding closet door” rippled valleys and summits, accessible only by boat or helicopter.

The East Side, the Coconut Coast, is famous for Hawaii’s only navigable river. You can cruise the Wailua River to the famous Fern Grotto.
Lihue, the island’s capital, is in the southeast area. North of the city is the breathtaking 80-foot Wailua Falls, famous for its morning rainbows. 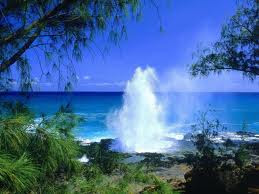 The South Shore has Spouting Horn blowhole, surf forced up through a hole in the lava rock, Hawaii’s version of Old Faithful. 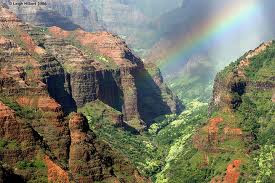 On the West Side you’ll find Waimea Canyon, known as the Grand Canyon of the Pacific, colorful and awe-inspiring.
I created Lehua Valley on Kauai to suit my story’s needs. I gave the valley mini-climates, especially along its slopes, where the altitude would be right to grow anthuriums and coffee trees.
I had fun with the Hawaiian versions of names. I used my name, Kalana (Sharon), and my late father-in-law’s name, Keneke (Kenneth), for two supporting characters. A black cat named Aumoe, Hawaiian for Midnight, has a peace treaty with the valley’s celebate wild rooster, The Colonel. 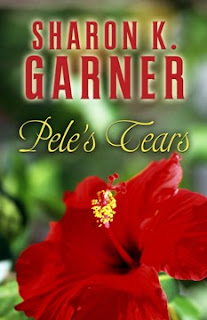 Other things Hawaiian that play parts in the story are various hulas; a love chant; Polynesian navigation via the star Arcturus, known as Hokule‘a, Star of Joy in Hawaiian; and, of course, Madame Pele herself. In the love chant, she visits Kauai, only to fall in love.
Pele’s Tears’ story of love and danger begins off screen with a marriage between a New England sea captain and a lovely Hawaiian woman. The good captain is the reason Pele’s Tears came into the Kahoa family. In the present, the trio of hidden gems threaten Dante and Lani—yet help them acknowledge and explore their love.
Mahalo,
Sharon K. Garner
Thank you, Sharon! Hawaii is definitely on my must see list for sometime in the future. What about you readers? Have a hankering to go to Hawaii or some other tropical locale? Let's hear from you. Post a comment to enter the drawing for a book from our Book Club Friday guest author this week. -- AP
Posted by ANASTASIA POLLACK at Wednesday, July 13, 2011

Kauai is outstandingly lovely but my heart is on the Big Island with my niece and her family.

Hawaii is beautiful but very expensive. The rainforests are incedible and the folk lore fascinating.

My series to be Lords of the Lost Civilization is set there. It's about Atlantis' sister city in the Pacific. I was inspired to write it after visiting Hawaii.

Good luck with the book and Mega Sales to you. I know I'll get it to relive my vacay!!

Wow, what a trip down Memory Lane for me. My husband and I honeymooned in Kauai on the Na Pali coast. Out of the islands we visited Kauai is our favorite. I love the green of everything and the smallness of the island. I'd also love to read a novel in that setting. Thank you, Sharon, for the great post.

Can hardly wait to read your book. We vacation on Maui every year, but plan on going to Kauai next summer. Congratulations and good luck with "Pele's Tears."

You're book sounds intriguing and I will add it to my list. I know little about Hawaii, but being a scuba diver, retired biology teacher and mystery reader and writer, I look forward to reading Pete's Tears.

Liz - Ah, the Big Island, home to Madame Pele. I believe a little piece of me loves each island best.

Kathye - I often wonder how the locals can afford to live there! The Islands' culture lends itself to such wonderful stories and chants. Enjoy the deja vu vacation! Thanks for the good wishes.

Patricia - How perfect, a honeymoon on Kauai. I have a friend who got married in the fern grotto. I'd have sold a kidney to attend, but it was family only. Enjoy Pele's Tears.

Theresa - Maui every year, and Kauai next year? Need a gofer, a nanny, a governess? Thanks for the good wishes.

And apologies to all for misspelling celibate. I hate when that happens.

The cover art for your novel is incredible! I love novels that take me to exotic places I've never been. Yours is definitely on my must read list!

Gorgeous photos, Sharon! Love the cover of your book, too. Heck, love your book :-)

Kathleen - Snorkeling and scuba rock in Hawaii. I'm a retired library cataloguer, a mystery reader, and a writer. Great minds and all that!

Jacqueline - I asked for a botanical cover, suggested the blood-red hibiscus that has a walk-on part in the book, and they listened!

Alice and Meg - I sent Lois some photos, but they were poor things so she put up these. I was gobsmacked when I saw them. Gorgeous. And I love my cover too!

We must be soul sisters. I am slso drawn to Hawaii (got married on Kauai 4 years ago), England, and Ireland. My recently published Enovel, Crystal Clear (on Smashwords.com), includes a trip to Kauai, and some of the others include the Big Island and Ireland. So great to go there via the novels when you can't be there in person. Great cover and best wishes for your novel. Sounds just about perfect! Cathy Corn

Well, hey, soul sister! Isn't it strange,this affinity for places? I know things about England, Hawaii, and Ireland that I have no business knowing. Sometimes I write, put things in, go do research, and I'm right on. Your settings, of course, intrigue me. Thanks for the good wishes.