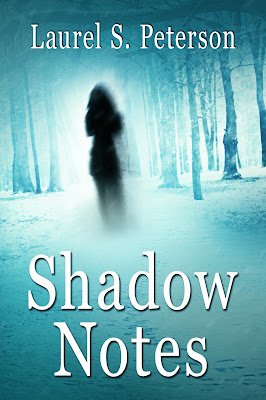 Laurel S. Peterson is an English professor at Norwalk Community College in Connecticut. Her poetry has been published in many literary journals and she has two poetry chapbooks. Shadow Notes is her first mystery.  Learn more about Laurel and her book at her website.

Stalking the Nouveau Riche, Without Getting Run over by an SUV

The night my husband and I moved into our Connecticut home, we went out for dinner in the neighboring, wealthier town. While we were waiting for our meals to arrive, he looked around, then back at me, shocked. “All the women are blonde,” he said to the one brunette in the room. This, obviously, offers itself up for satire. It’s been done before by other writers (the film version of The Stepford Wives was filmed not too far from here), but every time an SUV driven by a harassed woman on her way to pick up her toddlers from daycare nearly sideswipes me during rush hour, the impulse arrives again.

The main character in my novel Shadow Notes, Clara Montague, inherited her father’s landscape architecture business and some money from her mother’s side. Her father is dead, but her mother still lives in a nameless Fairfield County town. I’ll let you guess which one (and there are several options!)  Clara hasn’t been home in fifteen years, and the place has changed a bit. It’s even more crowded now with people attempting to prove that their money is just as good as that guy’s down the street.

While figuring out how to portray my character, I had to study the ways people asserted their privilege and power, which meant I had to hang out where they did, at least some of the time. There is definitely a craft to stalking these nouveau riche. It’s important to be in certain places at certain times of the day, or you might just miss them, as if they are shy scorpions under a rock. If you are brave and wish to see how the other half lives, I offer the five following suggestions:

1. First, head for Whole Foods on a Saturday morning. Wield your cart as if it’s a loaded gurney in an ER while talking loudly on your cell phone. Buy the cosmetic item that claims the most (untested) health benefits, a large latte, a loaf of French bread, three organically grown Fuji apples, a pound of quinoa, gluten-free muffin mix, three yoga magazines, and a six-tier custom cake you ordered last week for your child’s two-month birthday party. Get in the checkout line for five items or less, and glare at the woman behind you holding a single bottle of LeBleu, Ultra Pure Bottled Water. In the parking lot, back out without looking behind you, and don’t worry about that small thumping sound.

2. If that option seems too complex, then get in line at Starbucks around 11 AM, when the moms are a little crazy after a morning with their under-threes. Better yet, get in line at the non-Starbucks that brews coffee one pure, leisurely filtered cup at a time, and watch the kids shriek as they chase each other between the chairs.

3. Become a blonde. Brunettes stick out like a pair of Levi’s in Bergdorf’s.

4. Lurk in the boutiques on Greenwich Avenue. Pretend you can afford a Gucci baseball hat costing $300, and try to avoid getting tossed out by the security guard.

5.  Find a fitness oasis and work out every day for two hours, followed by a steam, shower and massage. Eat no more than three lettuce leaves for lunch, preferably ground up into a smoothie, then complain about how full you are to everyone within hearing distance.

Most of all, always, always have a look on your face of bored indifference: been there, done that. This seems to be the mark of true sophistication, but neither Clara nor I want to go there, as life offers up so many charming, surprising delights. Finally, these are rules for women. Stalking men requires golf clubs or a squash racquet, and access to rooms filled with cigar smoke. If you want to see more antics of the rich, I look forward to meeting you in the pages of Shadow Notes! Happy Hunting.

Shadow Notes
Clara Montague didn’t even want to come home. Her mother, Constance Montague, never liked her—or listened to her—but now they have to get along or they will both end up in jail or dead.

Clara always suspected she and Constance share intuitive powers, but Constance always denied it. When Clara is twenty, she dreams her beloved father dies of a heart attack, and Constance claims she is being hysterical. Then he dies.

Furious and betrayed, Clara leaves for fifteen years to tour the world, but when she dreams Constance is in danger, she can’t ignore it, no matter how she feels. Shortly after Clara returns home, Constance’s therapist Hugh Woodward is murdered and Constance is jailed for the crime.

Since her mother refuses to tell her anything, Clara enlists the aid of brother and sister Andrew and Mary Ellen Winters, Constance’s enemies, to dig out Constance’s secrets. First, however, she must determine whether the Winters, wealthy socialites with political ambitions, are lying and what their motivations are for helping her. In addition, why does the mere fifteen-year age difference between Clara and her mother make them nervous?

Starting to explore Constance’s past, Clara discovers a closet full of books on trauma and gets a midnight visit from a hooded intruder wielding a knife, who tries to scare her off her investigation. But her dreams become more demanding and there’s a second murder.  Realizing she can’t run back to Paris as she wishes, she works with the town’s sexy new police chief to find the truth about Hugh’s murder and its connection to her mother’s past.  Only in finding the connection will she be able to figure out how those secrets have shaped both Constance’s life and her own. Only in finding the connection will they finally be able to heal their relationship.

Buy Link
Posted by ANASTASIA POLLACK at Friday, May 20, 2016