USA Today bestselling author Stephanie Queen lives in New Hampshire with the trees, rocks, her cat Kitty, and some brave squirrels. Somehow she finds inspiration to write stories filled with romance, intrigue and a dose of humor. Learn more about Stephanie and her books at her website.

You’ve all heard of Martha’s Vineyard, right? After all, Bill Clinton vacationed there while he was president and then President Obama and family followed the tradition more recently. What could make a place for a relaxing vacation more enticing than the specter of a secret service team and political dignitaries (read this as dripping in sarcasm).

Luckily Martha’s Vineyard, located off the coast of Massachusetts and accessible by ferry and air, has a lot more going for it. I should know. I’ve lived in the northeast forever and vacationed there (before the Clintons) for years.

1. Beaches – It’s an island so it’s surrounded by beaches of all kinds, from the infamous State Beach of Jaws fame (filmed here) to my all-time favorite, Gay Head Beach, pictured here, with the giant boulders adding drama to the pristine sand and exciting surf.

2. Charm – Martha’s Vineyard is relatively unspoiled by cookie-cutter franchises and sports landmark spots like The Black Dog coffee shop in Martha’s Vineyard and one of the oldest carousels still in operation in Oak Bluffs.

4. Affordability – Our family rented a house within walking distance to Vineyard Haven center with its quaint shops and beach for a family on a modest vacation budget. It has remained affordable—so much so that the last summer we were there, we stayed two weeks! There are Inns, hotels, motels, homes and beach shacks available for every budget.

5. Relaxation – aside from the panache of possible celebrity sightings from the likes of Carly Simon to national politicians, and aside from the plethora of activities like water sports, boating, fishing and golfing, Martha’s Vineyard offers a true island-like quiet and slow-paced culture. No matter how crowded the towns like Oak Bluffs, Edgartown and Vineyard Haven might get—especially 4th of July weekend—you can escape within minutes and be surrounded by quiet and nature and hear nothing but the rolling waves. None of the towns would qualify as a city even on their most crowded day.

It’s no wonder I chose Martha’s Vineyard to be the place the soul-weary character, Dane Blaise, in the Beachcomber Investigations series, goes to seek solace and rest from his legendary exploits carrying out special missions world-wide. That’s where he settles and partners with Shana George, ex-Scotland Yard detective. But it’s a shaky partnership and they both wonder if Shana belongs on Martha’s Vineyard with the likes of Dane...

Decide for yourself – start the 6 book romantic detective series (and counting) with Beachcomber Investigations Book 1. 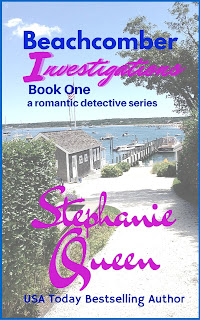 Beachcomber Investigations, Book 1
Ex-special ops legend Dane Blaise is desperate to recruit Shana George away from Scotland Yard to partner with him in his new venture, Beachcomber Investigations. She has impressive skills and if he’s honest, he needs her to keep him grounded. But most of all, Dane wants to keep Shana on the island of Martha's Vineyard because he can't get past his insane longing for her.

Shana’s boss David Young forces her to decide on the spot when he assigns an important case to Beachcomber Investigations. She chooses to partner with Dane, going with her gut--or more accurately her heart--rather than her brains. They may be good partners in crime-fighting, but they are all wrong for each other in every other way possible. He's soulless and lost and likely has more wounds from his past than the bullet and knife scars scorching his body. But she's crazy. About him.

Their big assignment is to protect Dane's old special ops buddy, Acer. They need to find whoever paid a sniper to take a shot at Acer--before the sniper takes another shot and doesn't miss.

Dane and Shana need to be on top of their game to keep Acer alive, and not on top of each other. But each of them is secretly worried whether that’s possible--and worried about what will happen if it’s not.

Buy Link
Posted by ANASTASIA POLLACK at Thursday, May 12, 2016

Lois, Thanks for letting me wax on about my favorite East Coast Setting - Martha's Vineyard!
SQ

Great blog by Stephanie Queen...I too have been to Martha's Vineyard and loved it...but I love reading the Beachcomber series!