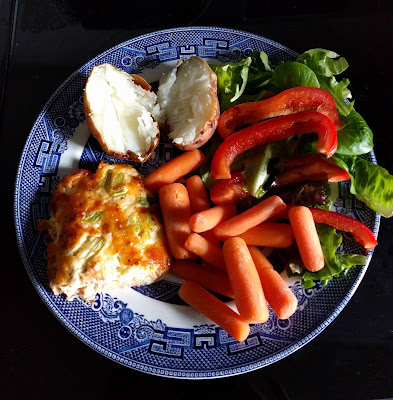 Jo-Ann Carson has lived most of her life on islands surrounded by snow covered mountains, lush rain forests and pristine beaches off the west coast of Canada. Growing up, she dreamed of traveling the world like James Bond, searching for relics like Indiana Jones, and finding true love, so it's no surprise that in her Mata Hari Series she combines elements of adventure, danger and steamy romance. In her Vancouver Blues Series she slides into the realm of Urban Noir and explores the dark side of the city. Learn more about Jo-Ann and her books at her website and her Lovin’ Danger blog.

This is another recipe I picked up on the Haida Gwaii and shared with Smokey at the Scuttlebutt café (in my book). It’s quick, easy and a real crowd pleaser. It also works with other kinds of fish and rice flour.

1 can of salmon (or the equivalent amount fresh)
1/2 cup flour
1/2 tsp. salt
5 eggs
2 cups milk
1-1/2 cups parmesan cheese grated
1/4 cups chopped green onion (but can be replace by any kind of onion you have on hand)

In a blender, mix salmon liquid, flour, salt, eggs and milk until smooth.

Pour mixture into a ten inch pie plate. Sprinkle salmon, cheeses and onion over top. Press down lightly with a fork to dampen the egg mixture.

Bake 25 to 35 minutes (400 F) or just until the quiche is set and a knife inserted in the middle comes out clean. Let stand for 5 min. before slicing. 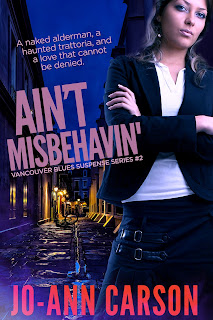 Ain’t Misbehavin’, Vancouver Blues Suspense Series, Book 2
A naked alderman, a haunted trattoria and a love that can not be denied.

When the manager of the Black Cat Blues Bar, singer Maggy Malone, witnesses a murder in her favorite trattoria, her life is upended. Known as the Naked Alderman, the victim is a controversial politician who wants Vancouver to be known as the greenest city in the world. He’s also the lover of Maggy’s best friend.  Despite his noble ideals, his head ends up in the pasta.

The last thing Maggy wants to do is chase another murderer. She’s worked hard to keep the Black Cat afloat and sort out her life, which is complicated by two, hot men, and acts of sabotage at her dock community on Granville Island.

But when the body count rises, Maggy decides to catch the killer.

Thanks for hosting me today.
Best Wishes
Jo-Ann

That photo looks heavenly and that recipe sounds divine! Thank you for sharing!!!

Hi Angela,
You're very welcome.
Thanks for stopping by. It's a favorite recipe of mine because it's a crowd-pleaser that's easy to make and tastes gourmet. I hope you enjoy it as much as I do.
Best Wishes
Jo-Ann