All Paty Jager’s work has Western or Native American elements in them along with hints of humor and engaging characters. Her penchant for research takes her on side trips that eventually turn into yet another story. Her Shandra Higheagle Mystery series, set in a fictional ski resort in Idaho, is full of quirky characters, twists, turns, and a bit of mysticism. Learn more about Paty and her books at her website and blog.

Today Paty talks about one of her favorite things—horses. Tell her which is your favorite animal, and you could win a copy of Killer Descent.

The Smell of a Horse!

Having grown up on a 200-acre farm with cattle, dairy cows, hogs, sheep, chickens, and horses, I love being outdoors and caring for the animals. Which was a good thing when I married a man who enjoys raising cattle. He doesn’t have my love of horses but we compromise. I won’t complain about all the old tractors he buys if he doesn’t complain about my horses.

As a child we had a stubborn Shetland pony my older brother and I rode. His name was Billy, which was kind of coincidental since that was my dad’s name. They both had a stubborn streak. Must be the name. ;) I don’t remember falling off Billy, but he would go under low things and get as close to the corner of the barn as he could, trying to dislodge the rider. It was funny the day my uncle decided he was going to teach Billy to behave. He ended up having to bail off when Billy scraped him off on a building.

We had an older horse, Missy, who was given to us when I outgrew Billy. When I was twelve, some people who purchased hay from my family gave us three horses for the hay. One was a three-year-old mare. She was orange colored – not a sorrel and not a buckskin. She had buckskin in her and had a brown stripe down her back and a black, brown, and orange mane and tail. Her name was Junebug. Since we both had birthdays in June, I claimed her and waited impatiently as my brother trained her. One day while he was in the barn looking for something, I snuck in the corral, untied her, and climbed on. From then on we were best pals. I rode Junebug from the time the snow was gone until it started again for the next six years.

In the summer, my two brothers and I had all day to ourselves, both our parents worked. My older brother had summer jobs, but my younger brother and I would saddle up our horses at least twice a week and pack a lunch. We’d ride the mountain behind our property or the hill on the other side of the canyon until we had to be back to make dinner and do chores.

Some days, I’d just want to be alone, I’d slip the bridle on Junebug, hop on her bareback, and ford the river to wander through the birch and pine trees, daydreaming. During one such trip, I was lying along Junebug’s back, staring up at the sun blinking through the trees, and she jumped sideways. She rarely spooked. I sat up and looked in the direction she jumped away from. I could have sworn I saw a warrior on a horse between the trees. I blinked and the vision was gone.  I think to this day that is why I am fascinated by the Nez Perce band that lived in the Wallowa Country before the white man encroached.

After I left home, my dad sold Junebug to a family with three young girls. I raised a family and went through several different horses trying to find another gem like Junebug. One of our daughters is as horse crazy as I am. She did Horse 4-H, and I went along to all the events. It was fun not only watching her grow as a horsewoman but to learn things I didn’t know. Growing up, I’d just hopped on and rode.  I had my daughter’s first 4-H mare bred by a friend’s stud. In 2000 she gave birth to a colt. I named him Buddy, but usually call him Bud.

Bud and I worked together to make him my horse. He’s a good sturdy quarter horse. I’ve had a couple of ropers want him because he’s low to the ground and compact, but I wouldn’t sell him for any amount of money. I trained him and enjoy riding him even though he has a lazy streak. When I ride with the grandkids, they are always thirty feet in front of me because Bud is in no hurry to do anything. What is aggravating is when I ride him alone. He thinks everything is going to get him and stops and stares and snorts. Even things he’s walked by a hundred times!

Despite the falls—I’ve had many over the years— horses are my favorite animal. I love their earthy scent, soft noses, and the rhythm of their hooves as they move across the ground. Writing western romance allows me to put my favorite animal in my books.  My character, Shandra Higheagle, in my contemporary mystery series owns horses and enjoys riding on Huckleberry Mountain.

Tell me about your favorite animal and I’ll put your name in a drawing for my ebook Killer Descent. 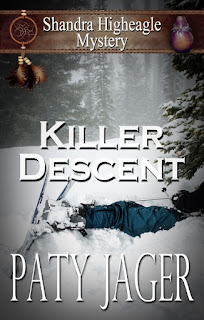 Once again Shandra Higheagle finds herself a suspect in a murder investigation when an ex-lover is found murdered on a Huckleberry ski run. A past she’d planned to never divulge now must be shared with the first man she’s trusted, Detective Ryan Greer.
Ryan puts his job in jeopardy when he’s booted from the case and uses all resources plus a few extra to prove Shandra is innocent. The information leads them down a road of blackmail and betrayal of the ugliest kind.

Thank you for having me on your blog! I look forward to hearing about your followers favorite pets.

My favorite pet is a dog. Dogs are more than an animal. A dog is wise, sensitive, loyal and devoted. My rescue dog, Bogie, whom I call a sage has all of these attributes and more. Dogs are uplifting and give me hope. Thanks for this wonderful feature and giveaway. saubleb(at)gmail(dot)com

I appreciate dogs the most of all since they got me through the health difficulties I have experienced during the past few years. The do not judge and are always happy when I return home even after a short time. Dogs are genuine and restore my faith. elliotbencan(at)hotmail(dot)com

This is a hard one for me. I adore all animals. I've had an "adopted" horse at an animal refuge (she passed away a few years ago). I'm convinced she knew I was one of her sponsors. Whenever I went to visit her, she'd trot to the fence and stick out her head for an affectionate rub. Growing up I had a canary who enjoyed "singing" to the sound of a televised football game. And, each of my three shelter dogs has been unique, loving, and special in her own way.

Traveler, Petite and Angela, Dogs are also one of my favorite animals. We have two. An indoor dog and an outdoor dog. I'll give until tonight for people to respond some more and then pick a winner of Killer Descent. Thank you for stopping in and commenting!

Traveler, You are the winner of my ebook, Killer Descent. Please contact me via email with how you read ebooks. Thanks! patyjag(at)gmail(dot)com