In 2009, Beverley Oakley published her first novel after marrying the handsome Norwegian bush pilot she met in Botswana. Since then she's written more than thirteen sizzling historical romances, mostly set in England during the Georgian, Regency and Victoria eras and more psychological historicals with less sizzle as Beverley Eikli. Learn more about her and her books at her website.

Knitting up a Plot

There’s something mesmerizing and cathartic about the click of the needles and a strand of yarn running rhythmically over my left forefinger while I watch television or read a book.

I never took to the traditional English style of knitting when I learned it at school in Australia, but after my Norwegian mother-in-law taught me Continental knitting during the year I spent living with my in-laws, I was hooked.

My husband and I had met when I was running a safari lodge in Botswana’s Okavango Delt and he was a bush pilot, flying in the tourists and supplies. After a whirlwind courtship, he took me to live in Norway with his family while we waited to begin an airborne geophysical survey contract in Namibia.

The job was continually delayed but for the next ten months, instead of twiddling my thumbs, I put them to good use, learning to knit the country’s seemingly complicated traditional Norwegian Fair-Isle sweaters under the expert guidance of my mother-in-law Elsa, my many sisters-in-law, and even my teenage nieces. Get-togethers in Norway, I discovered, were always done over coffee and with the mandatory piece of knitting in one’s lap.

Norwegian Fair-Isle sweaters look complicated to make, yet they’re not. There are never more than two colours in a row and the right, patterned side is always facing you, as the sweater is knitted on the round and then cut up to then sew in the arms, which are also knitted on the round. If it’s a cardigan, it’ll be cut down the middle with the bands knitted on afterwards.

At the end of more than ten months in Norway, my husband started his one-year survey flying contract in Namibia, and I joined him, operating the computer equipment in the back of the aircraft. As I was often the only woman on crew during this and subsequent three-month contracts in Greenland, Namibia, and Sweden, I found a great friend in my knitting.

Flying at 250 feet above ground on survey lines that crisscrossed the terrain at regular intervals of 50 feet gave me a wonderful bird’s eye view. I was thrilled by rare sights, like a trio of bat-eared foxes crowding onto the top of an anthill to check us out, or small village children scurrying from their thatched huts to do the same. Meanwhile I’d be monitoring the flight data, and all the while I’d have a growing sweater on my lap. I was known by my fellow crewmembers as the ‘knitting operator’.

Weaving yarn and weaving stories go hand in hand and in those days, before my first novel was published, I would construct elaborate plots in the aircraft, which, if working on a contract when my husband was flying in a different country, I’d write up when I got back to my accommodation.

They were fun days, seeing new countries, partying in nightclubs on the Arctic Circle, cracking my head on the roof struts in heavy turbulence over Greenland’s ice cap or getting locked up in French Guiana and having to spend the night, alone, guarded by a 6’4” French Guianese soldier brandishing an AK-47. That was a scary experience and worth a story on its own.

However I was fortunate to have my knitting with me. If you’ve got a ball of wool, a pair of knitting needles and a good plot brewing, you’ll never be lonely. 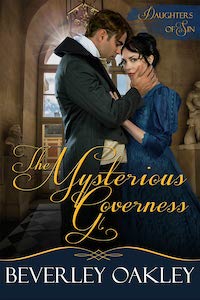 The Mysterious Governess, Daughters of Sin, Book 3
Two beautiful sisters – one illegitimate, the other nobly born – compete for love amidst the scandal and intrigue of a Regency London Season.

Lissa Hazlett lives life in the shadows. The beautiful, illegitimate daughter of Viscount Partington earns her living as an overworked governess while her vain and spoiled half sister Araminta enjoys London’s social whirl as its most feted debutante.

When Lissa’s rare talent as a portraitist brings her unexpectedly into the bosom of society—and into the midst of a scandal involving Araminta and suspected English traitor Lord Debenham—she finds an unlikely ally: charming and besotted Ralph tunley, Lord Debenham’s underpaid, enterprising secretary. Ralph can’t afford to leave the employ of the villainous viscount much less keep a wife but he can help Lissa cleverly navigate a perilous web of lies that will ensure everyone gets what they deserve.

Buy Link
Posted by ANASTASIA POLLACK at Monday, May 16, 2016

I remember my grandmother watching the Phillies while knitting. Everything she knitted during baseball season ended up being someone's Christmas present (smile!). Thanks for the post.

I'm probably like your grandmother, and lots of knitters I know, who just love to be occupied with their knitting while they watch television. I'm busy making my 11-year-old a Norwegian sweater - another one!

Good on your grandmother, I say :)