ALL GOOD THINGS MUST COME TO AN END... 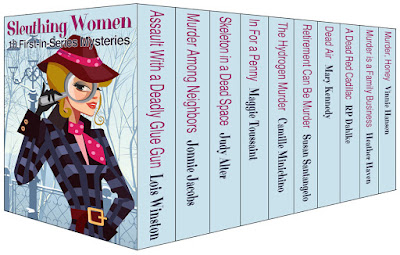 No, we're not ending Killer Crafts & Crafty Killers. But today author Lois Winston, who writes my eponymous series (and constantly risks my life and limbs), is here to talk about a joint venture that is coming to an end. If you want to read about me and some of my fellow sleuths for only a few pennies, you don't have much longer to take advantage of this great deal.

A few years ago sales of multi-author ebook box sets became very popular. For authors it was a way of getting their books in the hands of readers who may never have heard of them or their titles. For readers it was a way to try a book by one or more authors they’d never read without having to spend a lot of money. At .99 cents for ten full-length books, it was a hard-to-resist bargain. The participating authors didn’t make much money, but the goal was to increase their readership, not their pocketbooks. If a reader liked one or more of the stories, hopefully that reader would then go on to buy other books by those authors.

After participating in several romance box sets, I came up with the idea of creating a box set comprised of the first book in ten different mystery series. Sleuthing Women: 10 First-in-Series Mysteries launched on May 1, 2016. Now two years later that box set is retiring at the end of the month. If you never picked up your copy, now is the time. You only have until the end of this month. Come May those ten titles will cost $30.90.

Sleuthing Women: 10 First-in-Series Mysteries is a collection of full-length mysteries featuring murder and assorted mayhem by ten critically acclaimed, award-winning, and bestselling authors. Each novel in the set is the first book in an established multi-book series—more than 3,000 pages featuring amateur sleuth, caper, and cozy novels.