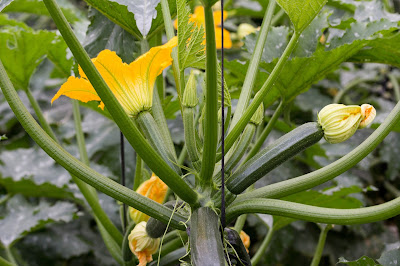 I’m a city girl exiled to the suburbs. I’m much more comfortable in a concrete environment with mass transit than the land of malls and minivans. Maybe that’s the reason I have two black thumbs. With few exceptions, plants see me coming and commit suicide rather than suffer a prolonged death at my hands.

Heaven knows, I’ve tried to develop a green thumb, but I swear there’s a conspiracy in the Garden State. Whatever I don’t kill, the squirrels devour. Along the squirrel grapevine the word is out; my address is passed from varmint to varmint. They hold conventions in my driveway and feast on whatever I dare to plant, leaving my neighbors’ gardens full of flowers and produce but mine bare.

One morning I looked out my kitchen window to find a squirrel perched on my gas grill, a green tomato between his thieving paws. I went outside to shoo the little bugger away and check my two tomato plants that the day before had been loaded with green tomatoes. Every single tomato had been yanked from the vine, chomped a few times, then discarded in the dirt.

But every year hope sprang eternal, and I headed to the garden center for the makings of a vegetable garden. Finally, after years of gardening frustration I discovered the one plant that both defied my black thumbs and the squirrels—zucchini. The first time I planted zucchini, I made the mistake of planting three, figuring that if the garden gods were smiling down on me, one plant might survive. All three not only survived but thrived. And that’s a heck of a lot of zucchini.

The strange thing about zucchini is its rate of growth. In the morning it’s the size of your pinkie finger, and by evening it’s big enough to feed your teenager’s football team. There are only so many ways you can disguise a zucchini and fool your family into believing they’re eating something other than those green things taking over the backyard. So that first year I wound up giving away a lot of zucchini.

The garden gods continued to smile down on me until a few years ago when all of a sudden they turned their backs on me. I was used to picking zucchini out of my backyard, not the produce aisle of the supermarket. A fluke, I decided. Wouldn’t happen next year. But it did. And the year after that. For the past three summers I’ve harvested next to nothing--one or two zucchini at most. Which makes for very expensive zucchini when you add up everything I spend at the garden center to grow those plants. I decided to give up.

Then this past fall the one remaining tree on my property that hadn’t succumbed to old age, blight, or Super Storm Sandy, departed for that great arboretum in the sky. While at the garden center, searching for an inexpensive replacement, the horticulturist asked, “How’s your zucchini this year?”

He nearly brought me to tears. I missed my zucchini—the one plant that used to thrive in spite of me. He told me to cheer up. The bees were back.

Bees? Well, it turns out the reason I hadn’t grown any zucchini the last three years was that the honeybees had flown the coop. My zucchini wasn’t being pollinated. The horticulturist said the honeybees were coming back, and I should definitely plant some zucchini this spring and dust off all my zucchini recipes.

So if spring ever arrives in New Jersey this year, I’ll give zucchini one more try, but I’m hedging my bets. Along with sending up prayers to the garden gods, I’m offering some to the honeybee gods as well. We’ll see if come harvest time, my prayers are answered.
Posted by ANASTASIA POLLACK at Wednesday, April 18, 2018

Wow, never thought of that as a reason. You can try pollinating yourself by removing the male flowers and rubbing them on the female ones. We actually pick the male flowers to make fritters. Yum, yum, yum!

I suppose I could if I knew how to tell the difference between the male flowers and the female flowers! Will have to research that. Thanks for the tip. I'm hoping the honeybees will do the work for me, though.

Best of luck growing your zucchini this year. I just put a delicious zucchini soup receipt on my blog - check it out. http://judyswriting.blogspot.com. I love my garden and can't wait for the snow to be gone and warm weather. I heard bees were finally making a comeback, thank goodness. I gave up on growing tomatoes because would only get one or two! I didn't know about the male flowers! I'll have google it. Thanks for the tip. I'm the opposite of you. I'm a country girl living in the city, so I have to have a tiny garden, but I love digging in the dirt.

Wow! What an interesting story about growing a zucchini garden. I don't have much of a green thumb either.
My dad had two beautiful gardens. When he was planting varied veggies, see this week's web blog under Earth Day!
Thanks for sharing.

Thanks for stopping by, Judy and lil_learnersclub!

You hooked me with the mystery and I had to read! Yes, we need bees! Unfortunately, 700 species of North American bees are headed toward extinction. I don't have to tell you what this could mean for our food supply.

That is truly frightening, Vinnie!

I'm waiting for a recipe for zucchini muffins to be posted on this blog (smile!)

I'm an avid gardener and there are always new challenges!

It's easy to tell the difference between the male and female zucchini blossoms. Just look closely. The males have a, er, appendage in the middle; the females have a, well, sort of (she blushes) vulva-like interior. You just break the whole male blossom and thrust it into the...well, need I say more?

Yes, it works. but bees are better!

Oh my, Jacqueline! Who would have thought zucchini were so sexy! Thanks for the birds and the bees, zucchini style!

Sadly bees are dying due to overuse of fertilizer and chemicals. I live in a suburb of New Delhi (India) and a few years ago we would have bees build these huge honeycombs. These days we hardly come across these. Your travails with squirrels is similar to ours with monkeys who will uproot all our homegrown aubergine plants. I once even wrote a short script called Monkey BusinesS! ��

Without honeybees our planet is in serious trouble, Adite. I hope countries begin to realize this and do something about it. Thanks for stopping by and posting.