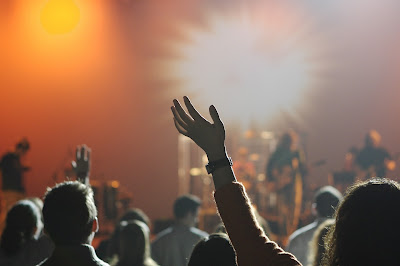 What was your life like before your author started pulling your strings?
God, it was so much easier. I could do what I wanted, keep people in check just by looking at them the right way. Now that she’s pushed me out of my comfort zone, it’s like everyone can see right through my barriers, see how many ways they can crack my shell with a tiny nick in the right place.

What’s the one trait you like most about yourself?
I like the way I can level people with a glare. I’ve gotten past that thing where I feel the need to look away.

What do you like least about yourself?
I’m abrasive. I hate that I can’t seem to just act normal once in a while. No matter what comes out of my mouth, even if I’m in a good mood, it sounds biting and harsher than I mean it to.

What is the strangest thing your author has had you do or had happen to you?
She sent me on tour with Eli’s band, like I’m some kind of damn groupie. I told her we wouldn’t get along, and I, again, was right.

Oh, and she sent me into a burning building, but that’s another story…

Do you argue with your author? If so, what do you argue about?
I’m pretty sure you know the answer to that. Yes, we argue. Pretty much nonstop. It’s usually about her pushing me at Eli, but honestly, it could be about anything, because I hate people telling me what to do. (Surprise, surprise, right?)

What is your greatest fear?
I don’t like to talk about my fears, but OK, if I had to pick one it would be staying by myself. I’ve just never done it. Because Dad’s sick, he’s always home with me, and even though it seems like I can handle pretty much anything, staying on my own is one thing I haven’t gotten my head around yet.

What makes you happy?
Not to contradict myself, but probably Eli. Talking to him. Saying things that are real.

If you could rewrite a part of your story, what would it be? Why?
I wouldn’t have been so fast to jump into bed with Eli. I don’t know, things got weird after that, and I figure if we had had a natural progression in our relationship, like most people, it probably would have been better for both of us.

Of the other characters in your book, which one bugs you the most? Why?
This one’s easy: Steve, the drummer from Eli’s band. He’s cocky and annoying as hell. He thinks he can tell everyone what to do, including me.

Tell us a little something about your author. Where can readers find her website/blog?
Don’t know, don’t care.

ETA: Thanks, Kass. I always know I can count on you ;).
You can find me at denisejaden.com

What's next for you?
I hear Ms. Jaden has lots of fun things in my future. After the burning building and the road trip with Eli’s band, I’m going to be out on my own for the first time. I’m also going to get more involved with Eli’s music and some photography. There’s a bunch of annoying and painful stuff on the horizon for me, and lucky you, you can be a fly on the wall for it if you want to… 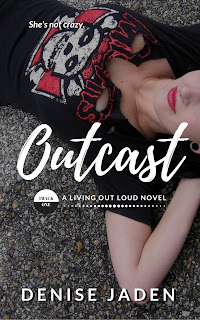 Kass Bateman may be a lot of things, but she swears she's not crazy—even when she wakes up strapped to a wheelchair in a psychiatric hospital and can't remember how she got there.

When Kass's family members go missing one by one, she enlists the smartest guy she knows to help find them. Unfortunately for her, underneath his brains and indifference are some dark secrets and a whole lot of distracting sexy.

Can Kass keep her head together long enough to rescue her family members from their captors—the truly dangerous and crazy ones?

Gritty, steamy, and rife with secrecy, Outcast is the first book in a new upper YA/NA crossover series for fans of Gayle Forman and Rainbow Rowell.

Thanks so much for featuring Outcast, and Kass! Boy, reading this over makes me want to write another book about her...(Mwah hahaha...)