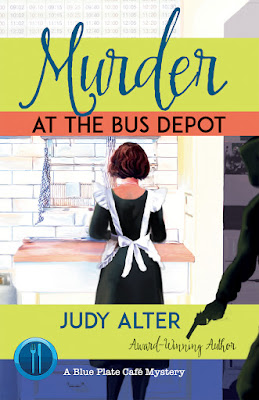 What was your life like before your author started pulling your strings?
Totally different. I was a paralegal in Dallas, single, having fun, living the good life. Now I’m running a café in my small hometown in East Texas. I love it, but it was a big switch.

What’s the one trait you like most about yourself?
Maybe that I understand food? I can cook good meals, down-home café style or upscale gourmet, and I know what tastes work together.

What do you like least about yourself?
My nosy stubbornness. So far, in slightly over four years back in Wheeler, it’s led me into four adventures that weren’t what I expected. Not that I’m complaining—those adventures brought David Clinkscales back into my life, but still…I just don’t need murder anywhere near me.

What is the strangest thing your author has had you do or had happen to you?
I was once stalked by men with rifles and had to hide in the mud and trash under a burned-out cabin, clutching my dog. Yuck! I was terrified of snakes and spider…and most of all those rednecks out there calling my name.

Do you argue with your author? If so, what do you argue about?
Whether or not I should get involved in other people’s problems. I keep telling her that I just want to run the café and enjoy David’s company, but she says that’s not the stuff of stories. No one would want to read it. So she throws In a murder or two.

What is your greatest fear?
Burnt food. Nothing ruins a café’s reputation faster. Unless of course, it’s the rumor of food poisoning. Now that almost made me close the Blue Plate Café.

What makes you happy?
A peaceful but busy day in the café, followed by cooking a really special dinner for David and spending the evening quietly with him. Doesn’t happen often.

If you could rewrite a part of your story, what would it be? Why?
I guess I’d have to start with not letting Gram die at the hands of her wicked accountant. But if she hadn’t died, I wouldn’t have come back to Wheeler to run the café, and I might never have figured out that the life I was living in Dallas was all wrong for me. Gram knew. She tells me so even now that she’s gone.

Of the other characters in your book, which one bugs you the most? Why?
My twin sister, Donna. She’s my sister, and I love her because that’s what you do with sisters, but when I’m honest with myself I have to admit that she’s spoiled, selfish, demanding, and willful. She’s a real pain. Even my beloved brother-in-law knows that.

Of the other characters in your book, which one would you love to trade places with? Why?
I don’t think I’d trade places with anyone. I love running the café, and I love David, and I’m basically happy. I’d just like fewer murders. Wheeler is beginning to feel like Cabot Cove, if you know what I mean.

Tell us a little something about your author. Where can readers find her website/blog?
Judy? She’s okay. The trouble with her is she sits at her computer all day and writes and nothing exciting ever happens to her, so she dreams up all these impossible situations for me. She’s been writing for years, and sometimes I wish she’d just turn her Texas eyes on her grandkids and her dog. But you can find out all about her and her books at http://www.judyalter.com. And she writes this blog she says is about writing, grandmothering, and cooking, but believe me, it’s a lot about cooking. I think that’s why I ended up running a café and playing with new recipes. Find Judy’s Stew at http://www.judys-stew.blogspo.com

What's next for you?
It depends on what Judy has on her mind. For my part, I wish it would involve a ring on my finger. After all, my biological clock is ticking, and I love my dog, but I’d also love to raise kids in the same small town where I had such a wonderful childhood. But David? He’s a bit gun-shy. Married once and divorced. Still, put a bug in Judy’s ear, would you?

Murder at the Bus Depot
A Blue Plate Café Mystery

Dallas developer Silas Fletcher sees endless real estate opportunities in Wheeler, Texas if only he can “grow” the town. Blue Plate Café owner Kate Chambers likes her hometown just the way it is, thank you very much, without big box and chain stores. When Fletcher tries to capitalize on a thirty-year-old unsolved murder, Kate know she must fight for her town, and she uses historic preservation of the old bus depot as one of her weapons. A suspicious death and a new murder make her also fight for her own life.

Anastasia, thanks for having me. Whew! I really welcomed a chance to blow off steam and say how I feel about some of the things Judy has done to my life. Wish I knew what's in her mind next, Come each chiekn-fried steak sometime--it's mygreat. Your friend, Kate

Sounds like terrific, fun read! And a great interview.