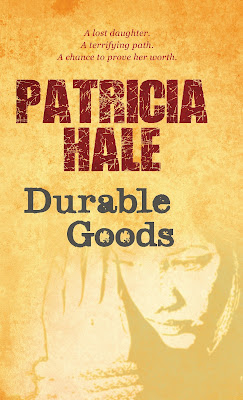 What was your life like before your author started pulling your strings?
Before I became a PI, I worked as an attorney specializing in family law. When I was singled out for my role as Britt Callahan in Patricia Hale’s Cole and Callahan series, I’d just left my law practice. The grisly aftermath of a case left me questioning my capability and I slipped into a black hole. Griff Cole put me back on my feet, then swept me off of them, leading to a partnership, personally and professionally. It’s been a whirlwind ride, but I’ve never looked back. I’m still out for justice, but my tactics have changed.

What’s the one trait you like most about yourself?
I can give you a longer list of things I don’t like about myself. But if I have to come up with one good trait… I guess I’d say I know how to persevere. I’m what you might describe as a fighter. A Dachshund/Beagle mix. Tenacious, until I get what I’m after.

What do you like least about yourself?
My lack of faith. I second-guess myself. Even as I plow forward through the muck and obstacles, I’m sure I’ll fail. Somehow, I always get what I’m after and no one is more surprised than me.

What is the strangest thing your author has had you do or had happen to you?
Not strange, but frightening. In Durable Goods, I infiltrated a religious refuge for women, which turned out to be a trafficking ring. Maintaining my cover was the only hope I had of staying alive. It’s also what made me want to die. Acting as “one of the girls” threatened my relationship with Griff and created an ethical dilemma. Lines blurred until I couldn’t recognize myself. Am I hero or victim?

Do you argue with your author? If so, what do you argue about?
Like I said, I’m not overly confident, and Hale pushes me beyond what I think I can do. I always come through okay, but it’s a hell of a journey. I have to admit that I’ve come a long way from where I started in The Church of the Holy Child. The strength I develop in Durable Goods leads to an atrocious act I carry out in Scar Tissue, the third book in the series. I’d never have believed I was capable of that. Patricia Hale likes to push my limits. Because of her, I’ve grown. I guess I should be more trusting… and grateful.

What is your greatest fear?
My greatest fear is something happening to my sister, Amy. I love Griff, but Amy is blood. My parents had more interesting things to do with their time, like cocktails and grad students. Amy’s the closest thing I’ve known to a mother. And while Amy’s straight A’s and cheerleader fame did occasionally catch my mother’s bleary eye, I was told I should never have been born. I already mentioned my lack of confidence, didn’t I?

What makes you happy?
Griff, Griff and more Griff. Oh… and a Honeyberry cigar.

If you could rewrite a part of your story, what would it be? Why?
In Durable Goods, I’d rewrite the time I spent at Oracles of the Kingdom under the rule of Isaac Bennett. I know now that he was a coward and a hypocrite. Ruthless, yes, but weak at heart. At the time, I was afraid of him. He got the best of me. But as my search for Kira continued, I met much worse and found my strength. I’d like to go back now and make Isaac pay for what he did to me… for what he did to all the girls.

Of the other characters in your book, which one bugs you the most? Why?
Rose was cruel and cold. She was, what you might think of as a Madam, overseeing all of the working girls. She was loyal to Isaac to a fault, afraid he’d lose his use for her.  She let nothing slide and reported the slightest indiscretion, like whispers behind his back or ingratitude for what was deemed his generosity. She was a bitter old woman past her prime. I hated her.

Of the other characters in your book, which one would you love to trade places with? Why?
I like being me, but once in a while I’d trade places with my office diva, Katie Nightingale. She’s funny and confident and runs an impeccable ship. She’s also a marathon runner and a size six. I, on the other hand, have been known to sip a margarita while on the treadmill and can’t refuse anything with frosting.

Tell us a little something about your author. Where can readers find her website/blog?
Patricia Hale lives in NH with her husband and two dogs. When she’s not on her computer or at work at a holistic veterinary clinic, she’s on the trails near her home hiking or snowshoeing. Patricia published her first novel, In the Shadow of Revenge, in 2013. She started her Cole and Callahan series with The Church of the Holy Child in September 2017. Durable Goods is the second book in the series, and Scar Tissue will be released later this year.  You can find out more on her website.

What's next for you?
Griff and I will be back in the Fall of 2018 in Scar Tissue, the third book in the Cole and Callahan series. When a student/athlete jumps to her death, we’re hired to find out why. But the truth opens one family’s Pandora's Box. Lines are crossed and risks are taken… all in the name of (twisted) love.

Durable Goods
Detective John Stark approaches the PI team of Griff Cole and Britt Callahan with a postcard he’s sure is from his estranged daughter, Kira. She’s been listed as a runaway for three years by Portland, Maine police, but John isn’t convinced that her continued absence is by choice. As Stark’s long-time friends, Cole and Callahan agree to look into the postcard marked only with the letters O.K.

The postmark leads them to Oracles of the Kingdom, a farm where women sell fresh produce in return for a fresh start with God. But nothing seems right about the town or the farm and Britt goes undercover to look for Kira. Once inside, she realizes Oracles of the Kingdom is not the refuge it appears. And when she's trafficked over the Canadian border, she’s on her own, over her head and losing clarity between hero and victim.

Sipping a margarita on a treadmill can be very relaxing (smile!).