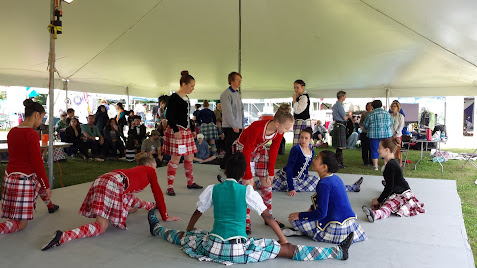 Today we sit down for a chat with Virginia Ann Forbes (Ginny) from award-winning author Maggie Foster’s Loch Lonach Mystery Series, Murders with a Scottish Slàinte.

Oh, gosh! I had no idea how wicked people could be! I mean, people you think you know. Don’t get me wrong. My hobby is genealogy and you can’t do that without studying history, so I’ve seen the worst of human nature, but only on paper. I guess I always just expect the best of everyone. I don’t really want to give that up, but I’m older and wiser now. I’ll be more aware of my surroundings, if you know what I mean.

My best trait is also my worst trait. I’m stubborn. It’s in my genes. I stick to my guns and that can really annoy some of the people in my circle, especially my family.

I don’t always follow my own advice. That has gotten me into trouble more than once. I should spend a little more time thinking things through before I act on them. 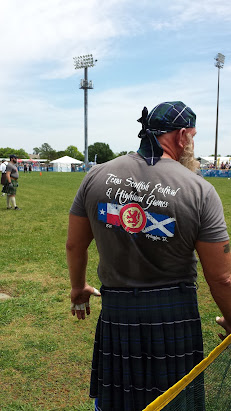 She had me tightrope walking across a dead tree, over a ravine, in upstate New York, in the middle of winter! What if I had slipped? Never mind the broken bones, this Texas girl doesn’t like cold water!

LOL! Oh, yes! She and I don’t always agree on what should be shared with the readers. I tend to be more forthright. I think she’s a bit timid. If I want to kiss a man, I should be allowed to do it. That’s my call.

Being an old maid. I don’t want that.

Being outside on a beautiful day. I love the fall season—the cooler air, the colors in the trees, the sky. Sharing it with someone makes it even better.

(Sigh.) My father died when I was twelve. I’d change that, if I could. He was a good man and I’d like to be able to talk to him about life.

I’m an ICU nurse, you knew that, right? Well, I’ve got a couple of co-workers I’d gladly do without. Two in particular. Without naming names, there’s one that digs up dirt, the worst kind of gossip, and spreads it around the unit, just to see if she can get a rise out us. The other is husband-hunting. Too much makeup, too little uniform. She’s a good object lesson, though. I don’t want anyone ever to say that about me.

Oh! That’s easy. Angus, of course. He’s lived such an interesting life! I want to travel the way he does, and do important things, and be respected, the way he is.

We only met a few years ago. She’s been working on other projects since forever, but not my story. I suspect she secretly wants to be me, but she’s ruthless in the danger she throws in my direction so I’m not sure she likes me. Doesn’t she understand scars?

Maggie Foster is actually the nom-de-crime of a woman with a past she would rather not admit to. She’s a seventh-generation Texan of Scottish descent. In addition to being steeped in Scottish traditions and culture, she has a lifetime of background in healthcare as a registered nurse, a medical malpractice litigation attorney, and a nurse educator. Her numerous interests include genealogy, history, travel, music, dancing, computers, writing, red hair, dark chocolate, good scotch, and men in kilts, not necessarily in that order.

Anyway, her website is www.lochlonach.com. Loch Lonach is where we live. It’s a settlement in north Texas, on the east side of Dallas. Our Scottish ancestors arrived in the mid-1800s and set up shop and stayed. It’s a nice place. You should come visit the Homestead. I’ll give you the grand tour.

I snuck out of my folder and took a peek at the planning files. She’s got more than twenty stories lined up, in varying stages of completion. Guess I’m going to be busy! I hope she’s got some fun planned. And travel. I want to travel. 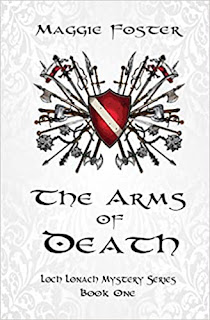 The Arms of Death

A Loch Lonach Mystery, Book One

Ginny Forbes is a nurse with an insatiable curiosity, a special talent for critical thinking, and a gift for getting into trouble. When one of her ICU patients dies unexpectedly, she finds herself on the trail of a centuries-old secret.

Ginny is no stranger to investigation. Her hobby requires ferreting out and fitting together the traces of her ancestors, to create a mosaic of their lives. She knows how to dig and she knows how to read between the lines.

When a handsome newcomer offers to help, she allows him to tag along, but reports back on his actions to her long-time boyfriend, also an historian and genealogist. Following the clues seems no more than a lark, but between the cause of death and the growing jealousy of her two helpers, Ginny is about to find out just how dangerous idle curiosity can be.

Having rea most of the Loch Lonach series, I look forward to the next installment. Ms. Foster does weave an intriguing and captivating story.