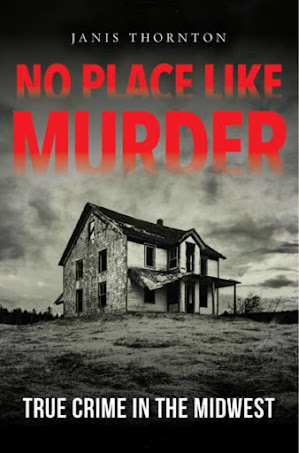 Janis Thornton is the author of a true crime-oral history-memoir, two cozy mysteries in the Elmwood Confidential series, a romantic mystery, and three pictorial-history books in Arcadia Publishing’s Images of America series. Her eighth book, No Place Like Murder: True Crime in the Midwest, is an historic true crime anthology. Learn more about Janis and her books at her website.

Stories Bring Harmony to Lives, Even When the Stories Are Murder

Throughout history, even in places as unspectacular as tiny Strawtown, Indiana, an ordinary person living a predictable, everyday life suddenly snaps — a drunken father shoots his two young sons execution style, a young man with a social disorder grabs a claw hammer and pulverizes his mother’s skull, an embittered mother poisons her son’s unsuspecting wife — and the world around them shatters.

These are the sorts of stories I explore in my new book, No Place Like Murder: True Crime in the Midwest, a collection of 20 historic true crimes that stunned their Indiana communities, titillated the curious, and dominated newspaper headlines between 1869 and 1950. Throughout the book, I try to make sense of the previously upstanding people who crossed over to the dark side and became cold-blooded killers.

No Place Like Murder is my second true crime project. True crime is a topic that evolved from my passions for history and mystery, which were the genres of my first few books.

I found my love of history about eight years ago as I gathered material for a book I was writing on the formation of my Indiana community. That project introduced me to many intriguing events and people that, more than a century before, had been rooted in the same patch of earth that I called home.

The history project was followed with a pair of cozy mysteries that featured a resourceful small-town newspaper editor, who reluctantly, but relentlessly, solves the crime du jour by cleverly outsmarting the wily characters out to stop her.

I was gripped by a fascination for true crime once I began digging through official records and news reports concerning the 1965 unsolved murder of my high school classmate, who was reported missing after a Saturday night date and found dead two days later alongside a remote country road. That book was released in 2018.

At first glance, these three genres may seem vastly different, but a closer look reveals that they are connected by a common thread — a strong, compelling story.

Story allows us to see the world through someone else’s perspective, to experience their situation, feel their emotions, accept or reject their consequences, and to make a judgement. We tell stories to bring order to our lives; or, as Bill Moyer wrote in his book, The Power of Myth, “We tell stories to come to terms with the world, to harmonize our lives with reality.”

When I started writing No Place Like Murder, I vowed to capture the horror of the long-ago, despicable stories in a way that modern readers could relate to. I combined my journalism, fiction, and creative nonfiction writing skills in an effort to transcend time and ensure the stories remained as relevant and relatable in 2020 as they were to readers in 1920.

In addition, I hoped readers could identify with the individuals populating the stories. The deeper I dove into the project, the more I came to know the people I was writing about in almost a personal way. I even traveled to cemeteries throughout the state to visit, photograph, and blog about as many of their graves as I could find (www.janis-thornton.com/blog). Victims became friends I admired and grieved for; while their killers — some of them repulsive monsters, others remorseful wrongdoers — became characters that both fascinated and repelled me.

But it was the victims that called to me. They, more than anyone else featured in this collection of heartbreaking stories, deserve a resurrection — their moment in the spotlight — so they can be heard, mourned, and remembered. Now that my fondness for history, mystery, and true crime has manifested as a published book, my hope is for the stories to resonate with readers as much as they have with me. •

No Place Like Murder: True Crime in the Midwest

A modern retelling of 20 sensational true crimes, No Place Like Murder reveals the inside details behind nefarious acts that shocked the Midwest between 1869 and 1950. The stories chronicle the misdeeds, examining the perpetrators' mindsets, motives, lives, apprehensions, and trials, as well as what became of them long after.

True crime author Janis Thornton profiles notorious murderers such as Frankie Miller, who was fed up when her fiancé stood her up for another woman. As fans of the song "Frankie and Johnny" already know, Frankie met her former lover at the door with a shotgun.

Thornton's tales reveal the darker side of life in the Midwest, including the account of Isabelle Messmer, a plucky young woman who dreamed of escaping her quiet farm-town life. After she nearly took down two tough Pittsburgh policemen in 1933, she was dubbed "Gun Girl" and went on to make headlines from coast to coast. In 1942, however, after a murder conviction in Texas, she vowed to do her time and go straight. Full of intrigue and revelations, No Place Like Murder also features such folks as Chirka and Rasico, the first two Hoosier men to die in the electric chair after they brutally murdered their wives in 1913. The two didn't meet until their fateful last night.

An enthralling and chilling collection, No Place Like Murder is sure to thrill true crime lovers.