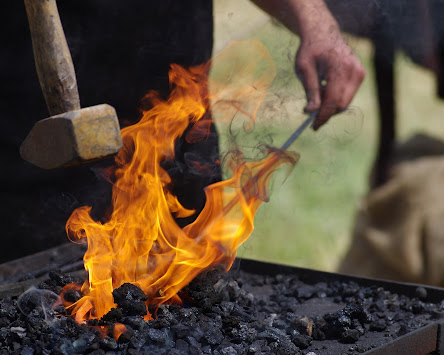 Today we sit down for a chat with Brodie from author Helen Henderson’s Windmaster Novels.

I don’t know who this “author” is that you say controls of my life. I have seen Lady Helen called an author. If it is her of which you speak, she just chronicles events as they are told her. We first met when I was an unbearded youth on the eve of my first battle. My opponent was Lord Dal. Beside being the Archmage he was also a skilled mercenary. I was no match for him as a man or a soldier, and he disarmed me with a single blow. He spared my life, and we have since become close friends. Lady Helen noted the story in a manuscript she calls Windmaster.

My ability to imbue life into steel. The weapons I make for the journeymen mages will serve as their tool for the rest of their lives. Even though I don’t know who will select what token for the hilt or what blade, each piece is special and customized for their future owner. Although I haven’t witnessed it myself, as I have no powers of my own, those who are summoned to the council fire say the token, hilt, and blade that are meant to go together call out to the mage who will use the dagger to focus their powers. The pieces have been said to emit a beam of light skyward that only the intended future wizard can see.

Almost every day since I came to the isle of the wizard’s council and school of magic, I have rued the fact I don’t have the ability to work magic. The other mages have never treated me less because of it. We are friends…They are my family…I am just not fully one of them.

As a fighter and a mercenary, I know the tactical advantage of harnessing the power of wind and rain. And with a rogue mage out and about the land, I need to be able to command every weapon available

Lady Helen merely recounts the story. As long as she is accurate, there is nothing to argue with her about. It is not her fault I was born without any magic of my own.

That I will fail Dal and his mate, Ellspeth. The archmage and his lady are my friends. They and their daughters treat me as a member of their family. I would never forgive myself if they fell in battle because I did not train them well enough … or if I failed to protect them.

Besides turning metal into a tempered weapon, I am honored that Wirake, the son of the head stallion of the herd of fàlaire that resided in the valley beyond the Isle of Mages, chose me as his rider. Long rides allow me to forget my troubles and ease my soul. The fàlaire are more than just horses, they have an earth magic of their own … and they are great listeners for their special friends.

I would have liked to have a family of my own. I never knew my parents and the mountain village they came from never accepted me. Which is why I signed up with Ruaridh, the head of the mercenary troops serving the false oracle. Of course, if I had had a happy childhood, I would never have met the archmage. While I may not have a family bound by blood, I ended up with one with even stronger ties.

Relliq. When the Archmage asked me for my opinion of Relliq, I had to admit that I didn’t like him. He is a mage, but he doesn’t use his powers for good. Instead he wields them against innocents and uses black magic to gain his ends. However, in all honesty, there is another reason I dislike him. He used his powers to stalk Kiansel, sister of the current Oracle of Givneh.

Although the author of several local histories, and numerous articles on the topics of American and military history, antiques and collectibles, Lady Helen’s first love is fiction. Her work in the museum and history fields enables a special insight into creating fantasy worlds. The descendent of a coal-miner's daughter and an aviation flight engineer, her writing reflects the contrasts of her heritage as well as that of her Gemini sign. Her stories cross genres from historical westerns to science fiction and fantasy. In the world of fantasy romance, she is the author of the Dragshi Chronicles and The Windmaster Novels. In her books, she invites you to join her on travels through the stars, or among fantasy worlds of the imagination. Learn more about her and her books at her website.

My fate... my future... is revealed in Windmaster Golem. I haven’t read the tale that Lady Helen has penned so I can’t tell state anything with certainty. Between Kia’s invisible stalker, a rogue mage and the wasting disease he set on the land, there is darkness on the horizon. 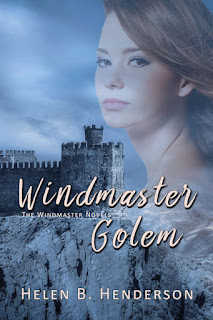 Kiansel, sister to the current Oracle of Givneh, is expected to one day assume the mantle and lead the temple’s followers. Her emerging powers force an impossible decision. To answer the siren call of magic requires she turn her back on her family, her heritage and the teachings of the oracle.

Banishment to a remote village as healer, a position he despised, fueled Relliq’s desire for revenge. The discovery of a mythical city and an army of clay soldiers provided the means to control all mages--including the one he wanted most—Kiansel.

Brodie, weaponsmith for the School of Mages couldn’t refuse the archmage’s request to act as escort for a healing team fighting a curse upon the land. But how can a man without any magic of his own fight a curse or protect a friend from an invisible stalker?

Thank you for letting Brodie and me visit.

A pleasure to have you both stop by, Helen!