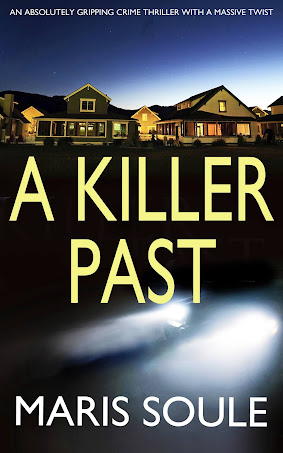 Award-winning author Maris Soule has had thirty books published, ranging from romance to mystery/thriller. Today Mary Harrington, the protagonist of A Killer Past tells us something about the predicament Maris wrote her into when she wondered what a woman trained as an assassin in her twenties would be like in her seventies. Learn more about Maris and her books at her website.

Hello, my name is Mary Harrington. I’m seventy-four and some people say I look like Helen Mirren. I was seventeen and working the streets of San Francisco when I was invited to join ADEC. You probably haven’t heard of that organization. Congress funds it but has no idea of its true purpose. Nevertheless, everyone’s happy when a healthy drug kingpin, terrorist, or despot suddenly dies of a heart attack or in a freak accident. The training I went through before being sent out on assignments was grueling, and some of those assignments were scary, but I felt I was helping rid the world of evil. That was until I turned thirty and was given an assignment that ended badly. After that, I wanted out. But you don’t leave ADEC, at least not alive.

I arrived in the small town of Rivershore, Michigan as Mary Smith, opened a bookstore, and avoided having my picture taken. I made up a story about my parents being killed in a car accident, leaving me financially secure, that I’d traveled through Europe in my twenties and now wanted the simple life. I won’t say it was love at first sight when I met Harry Harrington, the town dentist, but we were married for forty years before cancer took him. Sweet Harry never knew about my past, nor does our son, Robert, his wife, Clare, or my eighteen-year-old granddaughter, Shannon. I’m facing a problem with the three of them. Robert worries about my safety and thinks I should move into a retirement home; Clare is into ancestry and wants to trace my family tree; and Shannon says, because I speak French fluently, I should go with her to Paris. I’m afraid if I did, I’d be recognized and either arrested or killed.

My major problem now is the night before Halloween, on my way home from Shannon’s birthday party, my car stopped running just two blocks from my house. Being so close, I hated to call anyone for help when I could easily walk home, but there were two young men seated on the steps of a vacant house watching me. Gang members. I decided I’d let them take my purse without making a fuss, but darn it all, when one of them grabbed my arm and went after my house keys, I forgot myself and reverted to my earlier training. At least I didn’t kill them, but I guess gang members don’t like being put in the hospital by an old woman. They think they have to teach me a lesson.

And darn that Rivershore police inspector, Jack Rossini. He won’t accept that it wasn’t me who put the boys down. He says he’s worried about my safety, and now he’s checking into my past. I like the man, he’s fun to verbally spar with, but he doesn’t realize what he’s doing is putting both his life and mine in danger. It really isn’t safe to dig into A Killer Past.

When two gang members choose Mary Harrington as their target, the quiet widow has a secret to share of her own.

Most people in the town of Rivershore, Michigan view Mary Harrington as a quiet widow whose only oddity is that she spends a lot of time at the gym. Her son thinks it’s time for her to move into a retirement home. Two gang members think she’ll be an easy target. No one in Rivershore knows what Mary did in her younger years—really did—but the two gang members discover they’ve underestimated their victim . . . and Mary fears reverting to old habits may have jeopardized her future.

Thank you for allowing Mary a chance to tell people her story. She really is a very nice lady.

We were thrilled to have her come for a visit, Maris.

I really need to read this book! Mary sounds like someone I'd love to know.

Patty, Mary Harrington is my favorite character. I do think you'd enjoy reading her story.

You're not late, Jacqueline. Glad to see you here. Thanks for your comment.