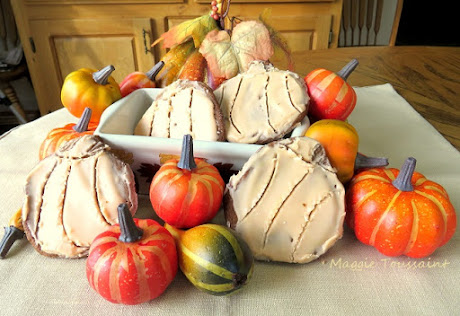 Award-winning Southern author Maggie Toussaint writes mystery and suspense. She lives in coastal Georgia, where secrets, heritage, and ancient oaks cast long shadows that often inspire her stories. Learn more about Maggie and her books at her website.

The Old Buick and the Cat

My catering sleuth in my latest release, Spawning Suspicion, is named River Holloway Merrick. She loves being creative with her cookie baking. She makes them in all shapes and sizes, using cookie cutters to make seasonal shapes or sometimes hand-shaping them. This time of year her specialty is molasses cookies. All the folks on Shell Island, her hometown, are wild about her cookies and her cooking.

Cookies always make everything better, but then so do pets. Here’s how River tamed a feral cat.

For the longest time, River felt like she carried the weight of the world on her shoulders as she parented her errant brother and failing mother. After her mom passed, her brother went through a rough patch before getting his life on track. 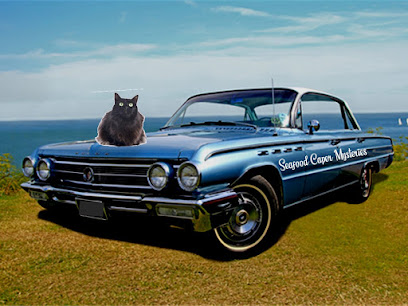 At the same time, River encountered a wildling cat at a catering job and gave it some bites of her delicious grilled sea bass. The cat followed her home. Turned out the cat needed a mission, and River needed a cat. It was a match made in heaven. River named her black cat Major because he likes to patrol the yard.

In addition, the cat fell in love with the old Buick that formerly belonged to River’s Mom. When River prepares to run errands, Major is usually waiting atop the Buick and staring at her intently. The message is clear. He expects a car ride—and he gets one!

Major is a bit of a sleuth too, and he often sniffs out clues to help River with her investigations. Islanders jokingly call Major River’s hood ornament due to his tendency to perch on the hood and watch the action when River is gathering information.

River’s delighted with her new pet, and she hopes you’ll root for Major as well.

Stir flour, ginger, baking soda, cinnamon, salt, nutmeg, and cloves in a medium-sized bowl. Set aside. In a larger bowl, beat butter and brown sugar on medium speed for about 1 minute or until creamy. Beat in molasses and egg. Gradually beat in the flour mixture. Chill covered dough for 1 hour or more.

Bake 12-14 minutes until edges are set. Do not overbake. Cool on cookie sheet for 10 minutes. Transfer cookies to a wire rack and cool completely.

Mix powdered sugar, vanilla, and 1 TBSP milk in a small bowl until combined. Add 1-2 drops food color, if desired. Stir in additional milk, a little at a time, until icing spreads easily.

Spoon icing on cooled cookies and spread it around with the back of a spoon. Allow icing to set. Store in an airtight container.

***Note: if you double the recipe, make in separate batches***

To create River’s pumpkin-shaped cookies: When making the icing, add 1-2 drops each of red and yellow food coloring. Adjust color to the intensity you prefer. Spread orange-tinted icing on cookie. Before icing sets, use a toothpick to draw three vertical lines to simulate the indentations on a pumpkin 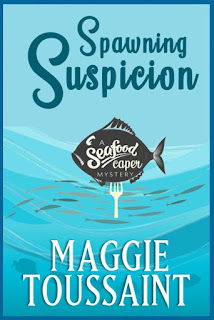 The death of island playboy Curtis Marlin doesn’t register on busy caterer River Holloway’s radar…that is, until her brother and his girlfriend are arrested for the former athlete’s murder. Certain of the pair’s innocence, the amateur sleuth sets out to investigate. Suspicion on the island spreads like chocolate sauce when River questions the victim’s teammates. The suspects don’t appreciate her stirring up trouble, but she won’t let an election-hungry sheriff make her brother a sacrificial lamb.

But there’s more than murder on River’s to-do list. A missing groom, catered banquets, and River’s own wedding plans keep her hopping like a short order cook. And as the cherry on the sundae, she has a wild kitty to tame. Under mossy oaks and rustling palmettoes, fact and fiction blend in a mouthwatering romp of good eatin’ and yummy recipes. Spawning Suspicion is the second in Toussaint’s Seafood Capers Mystery Series.

Thank you for hosting me today to help spread the word about my new culinary cozy! I'm delighted to have SPAWNING SUSPICION showcased at Killer Crafts & Crafty Killers today. I look forward to interacting with your blog followers.

We're always happy to have you stop by for a visit, Maggie. Best of luck on the new book.

Your books look like a great reads and page turners and quite intriguing.
Would love to read and review your books as long as they're in print format.

Thanks for the warm welcome, Anastasia!

And Crystal, thanks for your interest in the book. They are available in print from most online book vendors.