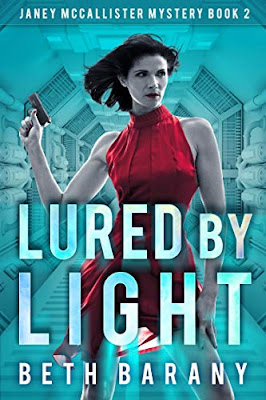 Today we sit down for a chat with Janey McCallister from author Beth Barany’s Janey MCallister Mystery Series.

I was a Lieutenant in the Sol Unified Planets Space Wing based out of Las Cruces, NM and traveling around as military police at various space stations. I was doing okay with my life, until my mom got sick and I realized I needed a much higher paying job. Why not work on an exclusive hotel casino in high earth orbit? They pay great and Mom gets her expensive medical care.

I like to solve puzzles, the more complex the better.

I can be stubborn and also have blinders on and forget relationships if they are outside of my work sphere.

I don't know if it is strange per se but she wants me to dress up in all this fancy clothing; granted it is for the job.

No, I think we get along pretty well. Although sometimes I don't tell her everything. She gets upset about that.

Failing the trust to do a good job that my colleagues have put in me.

The company of good friends, a job well done, seeing my mother smile, and especially her homemade cherry pie.

I would like to know who my father is. But mom says we're all better off not knowing. It does simplify things.

Partly Orlando Valdez, he is too sexy for his own good.

Sometimes I daydream about working with the chef in her kitchen when all I would have to do is make delicious meals as quickly and beautifully as possible. When the only problems I’d have to solve would be what recipes to suggest, based on the limited ingredients we have at hand.

Beth’s series featuring me is perfect for fans of J.D. Robb’s Eve Dallas books and Killjoys, Vagrant Queen, Castle, and CSI. It contains a slow-burn romance, enhanced humans, cool high-tech gadgets, a futuristic vision of the Earth, and a tough kick-ass heroine with secrets

Learn more about Beth and her books and find excerpts and goodies at her website.

At Bijoux de L’Étoile, the high-end casino orbiting Earth, anything can happen.

It’s a quiet day for L’Étoile lead investigator, Janey McCallister, until a young woman runs screaming through the blackjack tables. She looks like a victim of abuse, but when her boyfriend turns up dead the next day, she becomes the prime suspect

Determined to investigate every angle, Janey searches for clues and uncovers a world of high-priced escorts and human trafficking—a world just like the one that took the life of her best friend long ago.

When Orlando Valdez, inspector for Sol Unified Planets, shows up with a new suspect, Janey isn’t sure she can trust the mercurial man who stopped returning her phone calls. But as the threats escalate and she unravels a deeper conspiracy, Janey and her team will need all the help they can get. If they fail, it could be the end of everyone on L’Étoile.

Thanks for featuring Janey McCallister futuristic sleuth! She's so happy to stop by.

We were happy to have Janey join us today, Beth!