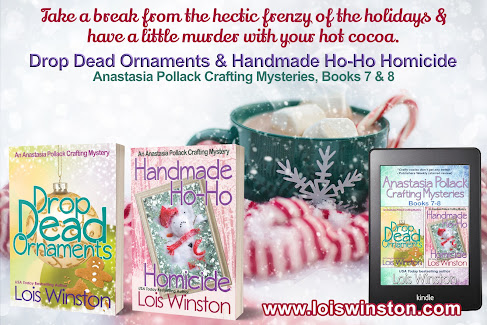 Is there anyone out there who isn’t totally {{{stressed}}} right now? 2020 has been one planet-wide bummer of a year. Luckily, I’m a fictional character, and although I’m rarely happy with the way my author, Lois Winston, has turned my world upside-down and inside-out, I have to admit, right now I’m totally thankful she hasn’t also dumped a pandemic into my world. Murder and mayhem are bad enough.

Shortly after the pandemic hit, Lois decided she wouldn’t be addressing Covid-19 in the Anastasia Pollack Crafting Mystery Series, the one named for me. For one thing, the books she writes about me don’t take place in real time. My series began years ago. Lois sold the first three books in 2009. Assault with a Deadly Glue Gun, the first book in the series, debuted in 2011. A Sew Deadly Cruise, the ninth book and my latest adventure, came out this past October. However, in my world only a little more than a year has passed between the first and latest book. So Lois has a perfectly good excuse for not including a pandemic in my life.

I’d like to think it’s because she feels guilty about all the turmoil she’s already created in my world, but I know it has more to do with her than me. Lois lives eighteen miles from Ground Zero. Nineteen years later, she still has nightmares about that day. She’s never watched a show or read a book about 9/11 and never will.

And that’s how she feels about the pandemic.

As I write this, I’m certain there are countless suspense, thriller, and Dystopian writers already hard at work on Covid-themed novels. However, Lois writes humorous cozy mysteries. Yes, they include murder and mayhem, but not in a way that keeps readers up at night or gives them nightmares. Even though the situations she writes me into are often inspired by actual events, the series is an escape from the real world, not a reminder of it. In other words, come for the mystery; stay for the laughs.

So whether you’re stressed by the pandemic, politics, the upcoming holidays, or all three, take a break, grab a cup of hot cocoa, put your feet up, and visit with me for a spell. I promise you a bit of Christmas cheer, plenty of laughs, and of course, a murder or two…or three or four…or…Hey, they are murder mysteries! 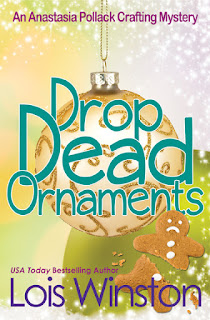 As one of those suspense author, I can guarantee, I'm not touching 2020 or COVID with a mask-covered ten-foot pole. Good blog, Lois

Don't blame you, Donnell! Thanks for stopping by.

Because my Rocky Bluff PD series is in real time, I didn't see how I could avoid the Covid. However, my Deputy Tempe Crabtree series is another story, it could happen at most anytime so not writing about it in the latest. For the RBPD mystery my cop grandson gave me some ideas.
However, I'm not against reading about what's going on in fiction, it's taken up most of our lives for a year, and nothing much has changed yet.

Thanks for stopping by, Marilyn. We're all handling this in different ways.

No Covid for me in Lethal Flip, or anything else I might write. Reading fiction is an escape. Good riddance to 2020. Good blog, Lois.

I'm in total agreement, Mary. We've had enough doom and gloom this year. Can't wait until 2020 is behind us.

When I started a new novel this fall I asked the Hive Mind on my FB page what they though about including references to the pandemic. A few said they were doing so in their work but most said no, and a few said an emphatic no. I've omitted any reference to the coronavirus and our current situation, but there are features of it that could find their way into a story later. As it turns out, at least for me, the pandemic info would not have added to the story so I'm glad I left it out. I'm also sick of 2020.

Susan, I was reading about the Spanish flu pandemic and found it interesting that there was little reference to it in the books written during the time and afterward. As a matter of fact, once the pandemic was over, people never spoke of it. As a matter of fact, many people first became aware of it from watching Downton Abbey a few years ago.