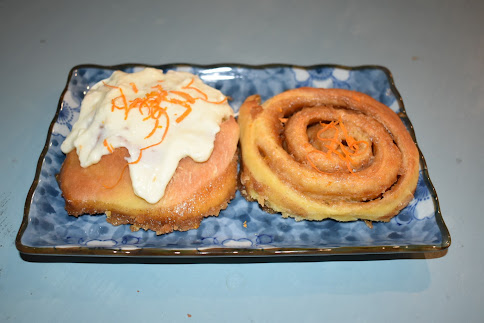 For those of you who don’t know me, I’m Katie Graykowski. I write romantic comedy, cozy mysteries, and my YA novel is coming out early next year. Among my family and friends, I’m known more for my baking and less for my writing. Notice I said baking … not cooking. Another dry and terrible Thanksgiving turkey, but this year I’m proud to say that a fire extinguisher wasn’t necessary. Believe me, that’s a vast improvement.

Today, I’m sharing my Christmas morning orange cinnamon rolls. No matter if we’re home for Christmas or in Grand Cayman, these cinnamon rolls are as much a part of Christmas as my grandmother’s manger scene and fighting over who has to clean up all of that wrapping paper.

Usually, I make the cinnamon roll dough on Christmas Eve and let it rise in the fridge overnight. If you choose to do that, make the dough, then put it in the fridge. Take it out the next morning and let sit on the counter for at least 30 minutes before baking.

Merry Christmas to you and have a Happy New Year.

3 cups confectioners' sugar, sifted (may use up to 4 cups)

For the dough, heat the butter with the milk, 3/4 cups of the sugar and the salt in either a small saucepan or in the microwave, until the butter is melted. Set aside to cool.

In a large mixing bowl, sprinkle the yeast over the warm orange juice and add the remaining teaspoon of sugar, stir and set aside for 10 minutes, until the mixture is bubbly.

Add the flour a cup at a time, stirring and using enough flour to form a stiff dough.

Turn out onto a floured board and knead until smooth and satiny, approximately 10 minutes. (Or place in the bowl on a heavy-duty electric mixer and knead with a dough hook until the dough cleans the sides of the bowl, approximately 5 minutes).

Place the dough in a very large buttered bowl, turn to butter the top and allow to rise, covered loosely with a kitchen towel, in a warm place until doubled in bulk, approximately 1 hour.

For the filling, beat together the brown sugar, butter and cinnamon until well combined. Spread evenly over the surface of the dough.

Roll up lengthwise and cut at 2" intervals to make 12 rolls. Place 6 rolls in each buttered dish. Cover loosely with a kitchen towel and allow to rise until doubled in bulk, about an hour.

Preheat oven to 350 degrees F. Bake the rolls for about 20-30 minutes or until puffed and browned. Cool to room temperature on racks.

For the frosting, beat the cream cheese, orange zest and vanilla until well combined. Add the confectioner’s sugar and beat until smooth and soft, not stiff.

Frost the rolls and serve immediately. 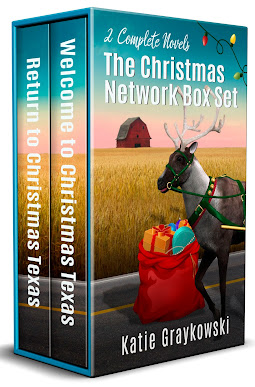 Christmas, Texas has as much magic as it has charm and only reveals itself to those who need it. The town was settled 1820 by the original Winter Texan, Santa Claus. He kissed the snowy North Pole goodbye and moved his whole operation to the sunny Texas Hill Country where there are never blizzard warnings and the only thing icy is his iced tea.

When Lana Green crashes her car into the Welcome-to-Christmas-Texas-you’re-not-lost-you’re-exactly-where-you’re-supposed-to-be, sign she doesn’t necessarily agree with the town slogan. She was on her way to Fredericksburg for a business meeting when she got lost in a thunderstorm. Since she has no intention of sleeping in her car during a thunderstorm and she has zero cell reception, she pulls her suitcase out of the trunk and marches toward town. When it comes to hating Christmas, she could give Ebenezer Scrooge a run for his money so visiting Christmas, Texas the week before Christmas is bound to be a lesson in torture.

Sheriff Nick Van De Berg is out on patrol when he runs across a Lexus wrapped around the Welcome sign. But the car’s empty. Surely the driver didn’t walk to town through the thunderstorm. As the storm gathers in intensity, so does his fear that something bad has happened to the driver. After checking the fast-swelling river, lower water crossings, and every single road in town, he stops by the Christmas Tree Inn where he finds Lana Green, his college sweetheart and the one that got away, sipping a mug of hot chocolate.

His Christmas wish every year since they broke up has been a second chance with Lana.

Can he convince Lana to take a chance on him and on Christmas, Texas?

When veterinarian, Jules McCowan’s best friend marries Santa Claus’s oldest son, Jules has no idea that her life is about to change forever. It’s been less than a year since she found out that Santa is real, reindeer can fly, and that Santa Claus traded in the snowy North Pole for the sunny, mostly snow-free Texas Hill Country.

Chris Van De Berg likes being Santa’s second son. He’s inherited all of Santa’s charm with none of the responsibility. When St. Nicholas blessed his family with eternal life, he was also blessed Chris with the gift of compassion. He can look into a person’s heart and feel what they feel … except for Jules McCowan. When he looks at her, all he sees is the person with whom he’d like to spend the rest of his life.

His Christmas wish has always been to find his soulmate.

Now that he has, how’s he supposed to get Jules to fall in love with him? Around her all of the charm he’s used to get people to do exactly what he wants is completely gone. In fact, he can barely get two coherent words out so how’s he supposed to convince her that they belong together? Plus, if they do get married, she’ll have to leave her life in the real world behind forever.

When Santa asks Jules and Chris to fly to France to check on Pere Noel’s donkey, they leave immediately.

Will Jules take a chance on Chris and leave her life behind? Or will Chris have to choose between her and The Spirit of Christmas?

Thanks for sharing this recipe. I'll give it a try. Kathleen