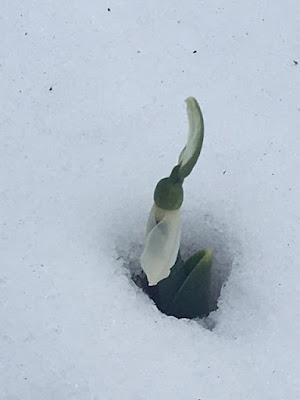 Award-winning author Erica Obey writes  romantic mystery, historical mystery, and paranormal mystery. She’s also the author of a nonfiction book on female folklorists of the nineteenth century. Today she joins us to talk about flowers, fairies, and mysteries. Learn more about Erica and her books at her website.

Kate Ames, the heroine of my latest historical mystery, Dazzlepaint, earns her living by illustrating Flower Fairy books. But you don’t have to believe in fairies to practice a little garden magic all your own. Here are a few of my favorite magical garden plants.

Snowdrops are always magical – poking their heads through the snow in the dead of winter to remind us spring will happen. According to Dr Thomas Forster’s Perennial Calendar and Companion to the Almanac,

The Snowdrop in purest white arraie
First rears her hedde on Candlemas daie;
While the Crocus hastens to the shrine
Of Primrose lone on St Valentine.’

And here it is! (photo above) Poor thing is looking like it’s having serious second thoughts, but I found this one on January 31, two days before Candlemas – or as we call it in America, Groundhog Day. Perhaps because they fight the elements so hard outdoors, it’s considered unlucky to bring snowdrops indoors, lest they ruin the cow’s milk or affect the laying hens.

Hellebore is another early blooming favorite in the cottage garden. It is often referred to as the Christmas rose, partly because of its blooming season, but also due to a legend that it sprouted in the snow from the tears of a young girl who had no gift to give the Christ child in Bethlehem. Hellebore has a reputation as a hallucinogen, but it can also be used to cure madness. Melampus of Pylos saved the daughters of the king of Argos from a Bacchus-induced madness, and Herakles was cured from a fit of madness induced by Hera – both using hellebore.

Foxglove – also known as Fairy Caps, Fairy Gloves, Fairy Thimbles, Fairy Herb, Fairy Bells, Fairy-fingers, Goblin Gloves, Fairy Petticoats, and Fairy Weed – is so closely associated with the fairies, it’s hard to know where to begin. Some stories suggest that the word ‘foxglove’ is merely a misrepresentation of ‘folk’s glove’, i.e. gloves belonging to the little people. This story is echoed in the belief that the mottled spots inside the flowers are actually fairy handprints.

Another says that the gloves do indeed belong to foxes and that fairies gave them to the foxes so they could sneak into the hen house without being heard. Another tale goes that the bell-shaped flowers would make a magical noise when rung and the fairies rang the bells of foxgloves to warn the foxes when a fox hunt was nearby.

Yet another legend explains that because foxglove is sacred to the fairies, it has the power of recognizing them, and it bows in deference to them as they pass by. So if the foxgloves in your beds begin to sway, it is possible the fairies are paying your garden a visit. Given all these stories, it is no surprise that foxgloves symbolize riddles, conundrums, and secrets in the language of flowers.

Hollyhocks are so easy to grow, they are known as alley orchids. And any well-bred woman at the turn of the century knew that they were a subtle signal of where to find the outhouse.

One of my first gardening memories was a great-aunt teaching me how to make hollyhock dolls. Do you remember how?

1. Pick a large, newly opened blossom for the skirt.

2. Remove the stamen and pistils and replace with a toothpick, with the blunt end at the bottom.

3. Select a slightly smaller blossom or flower bud for the cape/body.

5. If you like, find one last flower to give your doll a proper picture hat.

These are only four of my favorite flowers in the spring garden. Later in the year, I look forward to the reblooming Miracle Lily and the fabulous Miracle on the Hudson rose. I live and garden in Byrdcliffe, the arts colony in Woodstock that inspired Dazzlepaint’s fictional setting, Ker-Ys. And while I haven’t encountered any of the fairies you might find in my book, the magic of the Green World is never far away in this special place. 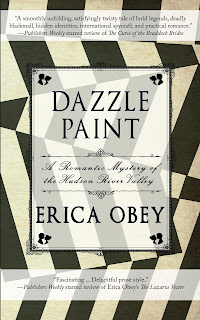 A Romantic Mystery of the Husdson River Valley

Gavin Fellowes, a damaged WWI veteran turned cynical psychic investigator, arrives in Ker-Ys, a Utopian art colony in Woodstock, NY, to investigate a series of purported fairy kidnappings of Communist garment workers who have taken over the failed Overlook Mountain House above the village. He is rapidly confronted with the willful blind spots of the well-meaning artists and the burgeoning anti-Semitism of the Catskills. With the help of Kate Ames, an illustrator and dazzlepaint designer who once might have been kidnapped by the fairies herself, Gavin must dig beneath the myth and legend to uncover an all-too-real occult threat that looms over Europe in the aftermath of the Great War.