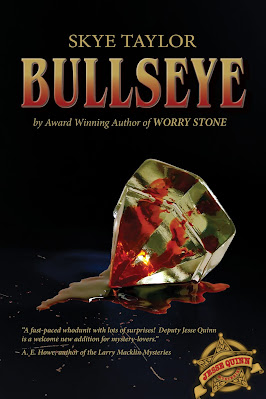 Today we sit down for a chat with Jessalyn “Jesse” Ellen Quinn from author Skye Taylor’s  Jesse Quinn Mysteries.

Seems like someone else was pulling my strings for as far back as I can recall. First it was my mother who thought I was a demure debutante. I tried. Really. I even married the man she thought my perfect foil. But Elliot was as bad as she was. I did the dutiful wife, stay at home mother, involved in all the appropriate civic activities until I discovered Elliot had been cheating on me. That’s when I decided it was time to pull my own strings and become what I’d always wanted to be, a cop, like my dad.

I’m a survivor. I think that includes strength and a sense of purpose, but I’ve weathered a lot in my life and it’s made me stronger, and a better person.

My impatience. I want everything to happen yesterday once I make up my mind to a thing.

There are a few things she had me doing in my backstory, but those are better left unmentioned. In Bullseye, she had me defying my boss and getting suspended. Even then she thought I needed to stay with the action and pursue the perp. But I got them in the end, so, that justifies my impatience and impertinence, don’t you think?

Frequently. She thinks I need to have a little love in my life. Probably because she used to write romance. I admit Seth Cameron, the guy she keeps throwing at me is sexy, interesting and fun, and I can’t deny the attraction, but really – I’m trying to make my bones in a mostly male world, I’ve got two teenagers and a meddlesome mother to juggle along with my career in law enforcement, so I wonder if I really have the time or energy to pursue anything beyond a satisfying roll in the sheets.

Solving a case and catching the bad guys, time spent with my kids, and walking the beach with my puppy, Murphy.

That’s a tough one. If I could rewrite my whole history I’d never have been taken in by Elliot the Rat, but then, if I hadn’t married him, I wouldn’t have Mike or Jacqui in my life. I guess the biggest thing I’d have changed was having the cajones to stand up to my mother right from the start and going into the police academy instead of heading off to the all-girls college my mother had attended. Who knows, I might have been a sergeant by now if I’d gotten an earlier start.

Zack Oliver. He’s such an egotistical ass, and he thinks women belong in support roles and not in uniform or especially not as the only female on the Major Crimes squad.

If I had to choose one, I guess it would be my partner Rafe. He’s a great guy who loves every part of his life, both on the job and off.

Skye Taylor got her start with a mainstream, The Candidate, which she still feels is one of her best books. Then she got sidetracked into romance with a series, The Camerons of Tide’s Way and a single title historical time travel. But Skye has always been an adventurer, always looking for a new challenge so she created me and dove into the mystery genre. You can read about her adventure in the Peace Corps (which she joined in her mid-50s) in the South Pacific, her own books, her history jaunts to a bunch of interesting places and books she recommends on her website: www.Skye-writer.com. She’s got a blog there as well.

Right now I’m in the middle of solving a crazy murder with too many suspects and just to make it more difficult, Rafe’s dad died and he had to take some time off so I got stuck working with Zack Oliver who is determined to arrest a man I am convinced is innocent so he can close the case and make himself look good. Framed will be out later this spring.

Jesse Quinn, the only female detective on the major crimes squad in St. John’s County Florida, and her partner Rafe are sent to investigate the bludgeoning death of a well-known socialite. Dan Hoffman, the dead woman’s husband found her in a puddle of blood and called 911. Jesse has known Dan for years and doesn’t believe he would kill his new bride, but the woman’s father, who never liked Dan, wants him arrested. But then, Dan himself is found nearly dead in his hotel room of what appears to be a self-inflicted gunshot.

As Jesse and Rafe hunt for two men, one mentioned in the dead woman’s diary, and another whose fingerprints were found on the murder weapon, a man on the run claims the woman’s murder is tied to a cover-up over an incident in Afghanistan and to two previous deaths, but before he can reveal more, he is shot.

Four people are dead, and two more attempts have been made. A rival in the Sheriff’s office wants to take over the investigation and pressure is mounting to arrest Jesse’s friend. Will she and Rafe be able to put all the pieces together before she is sidelined and Dan is put on trial for his wife’s murder?

Jesse Quinn's author thanks Anastasia Pollock's author for her invitation to visit today.