THE TRIALS AND TRIBULATIONS OF A FICTIONAL CHARACTER 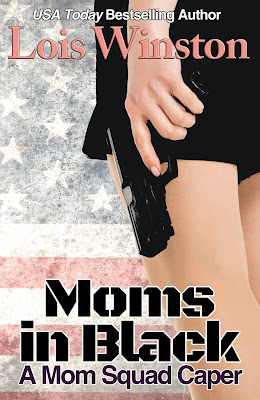 Today marks the official release of Moms in Black, a Mom Squad Caper. I discussed the origin of this novella by my author, Lois Winston, last month. You can read that post here. I also mentioned how I was hoping for the novella’s success, not just because of my connection to Lois, but primarily because if she focused her attention on getting another unsuspecting character in trouble, she’d give me a bit of a reprieve.

Sad to say, Lois didn’t see it that way. She isn’t waiting for data to come in to indicate whether or not sales of Moms in Black, a Mom Squad Caper, is successful. Whether she writes more Mom Squad novellas or not, she has no plans to give me a break. She’s already hard at work on my next adventure. Sigh!

Is there no rest for an overworked, reluctant amateur sleuth? Apparently not.

Meanwhile, I’ve taken the time to get to know Cassandra Davenport, heroine of Moms in Black. She’s pretty cool. I think you’d like her. Unlike me, she doesn’t seem fazed by Lois thrusting her into a life of danger. Then again, Lois has given Cassandra a team of experts and insisted she not only learn self-defense techniques but also how to handle a gun. And although Cassandra shares my distaste for all weaponry that goes bang or boom, she isn’t opposed to using one if necessary. Cassandra is on her way to becoming a trained operative.

On the other hand, as an amateur sleuth, I’m left to muddle through from one dead body to the next with few resources other than my instincts and quick wit. How fair is that? I’ve been around much longer. Doesn’t seniority count for anything?

I actually broke down and suggested to Lois that I might be willing to learn how to use a firearm if she allowed me to become a member of the Mom Squad. The training is working wonders for Cassandra’s underarm jiggles and muffin top. Given my addiction to anything sweet and chocolatey, I could use some muscle tightening and flab reduction, especially with a wedding on the horizon. Unfortunately, Lois immediately nixed that idea. She explained that I was a character in a cozy mystery series, and there were certain rules she needed to follow, like maintaining my amateur status.

Again, I ask, is that fair? However, according to Lois, no one ever promised that life would be fair. So there you have it. I’m at her mercy—as always. Such is the life of a fictional character. No matter how much we’d like to think otherwise, in the end, we have no self-determination.

However, just to show you that I don't hold grudges (much), Lois was recently interviewed on the Chatting with Authors YouTube channel. Check it out.

When Cassandra Davenport applies for a job at www.savingtheworld.us, she expects to find a ‘green’ charity. Instead, she becomes the newest member of a covert organization run by ex-government officials. Dubbed the Mom Squad, the organization is the brainchild of three former college roommates—attorney general Anthony Granville, ex-FBI agent Gavin Demarco, and tech billionaire Liam Hatch—all of whom have lost loved ones at the hands of terrorists. Financed by Hatch, they work in the shadows and without the constraints of congressional oversight, reporting directly to Granville.

Demarco heads up one of the six groups that comprise the new operation. He hires Cassandra as the newest member of his New Jersey based team. In the course of monitoring possible terrorist threats, the Mom Squad discovers a link to Cassandra’s ex-husband. Before she’s fully trained, Cassandra is thrust into a world where her ex may be involved with radicalized terrorists bent on killing as many Americans as possible.

And while they’re saving the world from an imminent attack, what in the world will Cassandra do about all that sexual tension simmering between her and her new boss?

This sounds like a really interesting story! Love the "Mom Squad" premise!

Congratulations on your book release.