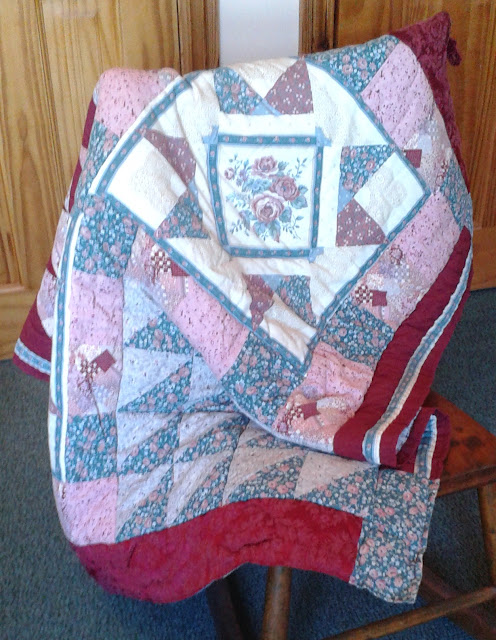 Dianne Ascroft is a Canadian writer who has settled in rural Northern Ireland. She writes the Century Cottage Cozy Mysteries series and The Yankee Years WWII books. Learn more about Dianne and her books at her website.

Weaving My Passion into the Plot

Thanks for inviting me to talk to your readers today, Lois. I’m Dianne Ascroft and I write the Century Cottage Cozy Mysteries series. I really enjoyed researching and writing The Heritage Heist, the latest novel in the series. Part of the reason for that is that it feels like coming home whenever I step into the world of my character Lois Stone. An equally important impetus to write the book was having the chance to feature one of my favourite hobbies in the story.

I’ve been a keen quilter for years. Most people are familiar with patchwork quilts like the ones on the cover of my book. These bedcoverings are made from small pieces of fabric, which are cut into various shapes and sewn together to create the design. But there are other types of quilts too. The quilt that is central to the plot of The Heritage Heist is a wholecloth quilt.

Wholecloth quilts are a single plain colour, usually white, with intricate patterns handstitched into the fabric to produce the design. Today the top layer is made from one piece of fabric. Several strips of fabric sewn together were needed for early wholecloth quilts because the looms of the era were not wide enough to produce fabric of the required width to cover a double bed.

Wholecloth quilting has existed in Europe for centuries. It was popularised in France during the early nineteenth century and became fashionable in Great Britain later in the same century. Three areas of Britain have strong traditions of this type of quilting: England’s North Country, Wales, and the Scottish Borders region.

Fenwater, the fictional Canadian town in my novel, was founded during the early 1800s by settlers who came from the Scottish Borders. So, when I learned about this area’s tradition of wholecloth quilting, I knew I had to work it into the plot of one of my books. It made perfect sense that settlers would bring their craft with them to the New World.

But let’s get back to the quilting style. Skilled needlework is required to create the designs in wholecloth quilts. There are up to twenty tiny stitches to the inch in the detailed, handstitched designs. It isn’t difficult to set a sewing machine’s stitch gauge to produce such tiny stitches, but try hand sewing a row of stitches that are even and small enough to fit into a single inch and you will see how exacting the work is.

Each British region where the craft flourished has its own distinctive motifs for their designs. A “feathers and twisted rope” motif is favoured in England’s North Country while Wales is known for combining leaves and spirals. 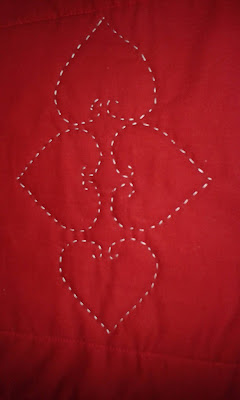 In the Scottish Borders town Hawick, they favour a “broken heart and thistle” motif. In this design, the stitching never meets at the top of the heart to complete the shape. Often the focus of the design is a large central heart, surrounded by a repeated hearts and thistles motif. Scales or large daisies called “gowans” are stitched into the fabric between the motifs and along the border.

I modelled the antique quilt in The Heritage Heist on this design. My protagonist is wowed by the exquisite workmanship in the beautiful counterpane when she first sees it, and she keenly feels its loss when it’s stolen. She is even more perturbed when one of her friends becomes the prime suspect in the theft.

We often associate patchwork quilts with North America’s past, but wholecloth quilting actually gained popularity in America before patchwork quilting. In the early nineteenth century wealthy women, who had the time to develop the high degree of needlework skills required, introduced wholecloth quilting to the New World. Many of the designs they stitched were floral or geometric patterns. They also stitched images of animals, ships and even people into their bedcoverings. By the middle of the nineteenth century, less affluent women were also making these quilts. The earliest Amish quilts were wholecloth in a variety of solid colours. Patchwork quilts made from blocks didn’t become popular in America until the 1840s.

I’m so glad that I stumbled onto a reference to wholecloth quilting while researching and preparing to write The Heritage Heist. I loved delving into the history of the craft and relished the opportunity to weave a wholecloth quilt into the plot of this novel. 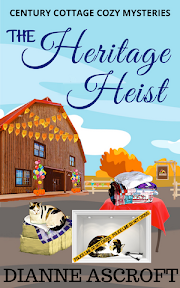 A fall fair, a cornered craftsman, an heirloom heist.

When an antique quilt that is a cherished part of Fenwater’s past disappears from the market before her town’s fall fair, it’s up to Lois Stone to resolve the quilt quandary. Preserving the town's heritage and her friend's reputation are at stake.

Thanks for inviting me to share my passion for quilting and cozy mysteries with your readers today, Lois.

Happy to have you visit, Dianne!