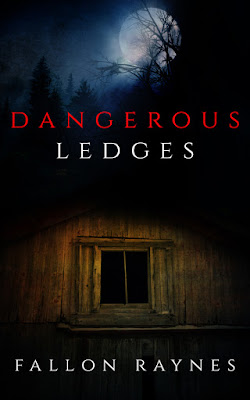 Today we sit down for a chat with thriller, mystery, and horror author Fallon Raynes. Learn more about her and her books at her website.

I had written short stories and poems on and off since I was young. I never really thought about being an author until I came across self-published authors and loved their stories. The internet was a great resource to find them. That was in 2006. Once I realized people could publish their own books, I started writing. I would work on a novel when we were camping. But life got in the way, and here I am several years later finally with one novel under my belt and many more to go. That first novel that I started in 2006, will be finished this year.

Sadly, after calculating that number, it has been fourteen years. But, if we were to go from the thought of Dangerous Ledges popping into my head and finally being ready to publish—first draft, editor, second draft to final edits from my editor—that would be five years. Longer than I would have liked, but my day job ate my energy to put words on the pages. I work full time for now.

Indie Published. IF anyone reading this is thinking about publishing a novel/short story, one word of advice: use an editor that does it all—not someone who just cleans up the grammar.

I write anywhere. Wherever I am and the characters start talking, I stop and make notes, or record my thoughts. I’ll even email myself snippets on my lunch hour.

I’m a little of both. I write when it’s quiet, or sometimes I need to drown out my surroundings, so I’ll pop in the earbuds and listen to heavy metal—it’s fast-paced and helps me focus/drowns out the noise around me. It has lyrics I don’t want to sing along to.

I get ideas for plots that aren’t always something from my life but also from some things I’ve seen happen to others. Basically an idea pops into my head, then my writer’s brain takes it from there, exaggerating things into a story, or part of a character.

Dangerous Ledges has Ledge’s “crazy side” starting from a friend who went through a drug to stop smoking. It worked but it messed with their mind—friend is fine, Ledge went off the deep end, and thought he was doing better—when he found an “outlet with other women” to control his crazy—but he lost Liza. And then he lost the rest of his marbles. I also mention hypnosis in this story—something I actually used to become a non-smoker.

Also, that novel that I had started back in 2006, I had gotten stuck with the story line. I needed a character’s backstory. That backstory showed itself to me while I was listening to another book. Since I was working on writing Dangerous Ledges I made notes on it. That novel is one I’m working on now. It has a few things in it that I’ve experienced. I’ll tell more about those when I write the After The Story—my version of the Author’s Note—for that novel.

I don’t really have a process. The names just come to me. In one instance when I needed a character’s name in Dangerous Ledges, I just sat for a few minutes trying to think of a name. My husband was watching South Park while I was writing, and I happened to come out of my writer’s fog long enough to realize what he was watching. Then I heard one of the characters say, “Kyle”. And now when you read the book, you’ll know where that name came from. He’s not a main character, so he’s not mentioned very often.

I also get names from actual people—first names or last names—when I run into someone or read a name that I like. One name I picked up from a server while my husband and I were eating out. Although most times when I’m writing, if new characters pop into the story, they usually come with names. I’m weird.

I like using real settings, with my own twist on them. Dangerous Ledges is set in Midland, Michigan, and I won’t say where the other setting is because that will be a spoiler. I used the basic layout of the town and created the characters “living and work” places as fiction. It helps me on my end because it saves me having to do a lot of scene set up. I can mention actual places/buildings/businesses because they’re places my detectives have to go to do their job--the employees are all in my head. However, the research for the locations in that story was a rabbit hole I fell in—from the cruise line, the planning for Liza’s trip, to the locations/scenes for the rest of the plot locations. A huge time suck!

I think I would go with Ledge. He’s a neat-nick. He needs to have things tidy and in their place. He does not work well in chaos.

This is tough. I have a few pet peeves but this surpasses it, so I’ll call it a quirk. I cannot stand when people tsk their tongue when they’re counting something. It’s like fingers on a chalkboard for me. I’m not sure if that applies, but I am a pretty boring person.

Tough question… I honestly don’t have one. I love reading other authors, especially fiction because it’s something a mind creates. I have several favorite authors. I appreciate their writing, but to pick one book to call mine… I can’t do it.

The year of the winter that kept giving—I didn’t get to spend as much time with my Grandma, and she passed away that year.

This is easy: Rude People!! They’re in the stores, on the roads. It seems there are more and more of them every year. I don’t understand when parents stopped teaching their kids manners. IE: I’m holding the door for someone, and that person keeps walking—no “thank you” no taking the door handle from me—as if it’s my job to hold the door open for them. I have to stop now, or I will write a book on all the rudeness.

I went with the basic “things” I would want to be stranded with should I have my family with me.

I worked at Wendy’s a loooong time ago. The worst part of that job was the few times that I had to clean the bathrooms. Pigs are cleaner than people—and you would think the men’s room would be the worst to clean, but no…

Another tough question… I love a lot of books by different genre authors. I’m not sure this is the best book, but, in all the books I’ve read in my life, I’ve only ever read one more than once. And actually thinking about this right now, I want to read it again. That book was Birthright by Nora Roberts. I don’t read books more than once for one reason: there is so little time, and so many books.

I love to read reviews. So if you get a chance to read Dangerous Ledges—and any of my future releases this year—please drop me a review at your purchase site. Or on Goodreads—you can find my links at my website. Good or bad, it is interesting to see how my story affected you.

Also, I do not write romance. If you need the romance aspect, you won’t find much of it in my stories. There might be a hint of it in my new series, but the stories are not based around that genre. Dangerous Ledgesdoes not have any romance. I think that part turned off some readers, but I also picked up a few romance readers from that story, too. Everyone is different.

Liza McAllister is newly divorced when she's talked into going on a cruise with her friend Chrissie. Determined to put her crazy ex behind her, Liza throws caution into the wind and indulges on some new clothes and a spacious cabin on the cruise ship. But someone else has other plans.

Ledge McAllister is hell-bent on reclaiming what is rightfully his. His life was turned upside down the day his wife walked out of his home. He will not lose her again. She belongs to him.

Thank you Lois for having me!!

Happy to have you join us, Fallon!