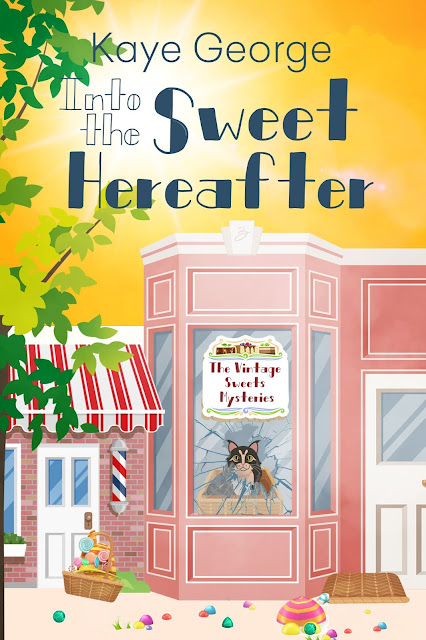 Today we sit down for a chat with Tally Holt from author Kaye George’s Vintage Sweets Mystery Series.

I was doing fairly well. I had my own business and was making money. Then that author had my best friend from childhood, Yolanda Bella, talk me into buying—okay, putting a down payment on—the shop next to hers in Fredericksburg  Texas, where we both grew up. It’s been a struggle ever since I got here! Getting the business off the ground, keeping employees, having people get murdered in Tally’s Olde Tyme Sweets, my shop—that last one is very bad for business!

I like to think that I keep a level head in emergencies, but I’ve found that’s not always true. I thought I had good business sense but am having to talk Yolanda into looking over my books. I’ve always been a good judge of character until I got fooled by a few people. Maybe being flexible, going with the flow, is what I’m good at. After all, I’ve never had a pet cat, and am loving the one my brother dumped on me. It doesn’t hurt that Nigel is the sweetest big lump in the world, a Maine coon.

I’ve found I have a tendency to get too involved in the lives of my employees. I find myself micromanaging if I’m not careful. That doesn’t go over well with them.

I’d say that coming up with dead bodies is pretty strange! I never had to deal with them before she stepped in. And why would she pick Gene as a victim? There aren’t many men more good-looking that him! It’s a loss to womankind.

I tried to get her to focus on someone else as the main suspect for Gene’s murder, but nooo, she went with Yolanda, my aforementioned best friend. I had no choice but to try to dig up whatever I could to get her off the hook that I knew she shouldn’t be on.

Let’s see—my shop failing, me being the next victim, Yolanda shunning me for making her look guilty… Now that I look at the list, I’ll pick #2. I don’t want to be next!

I’ve found that Nigel can do that, no matter what else is going on. Yolanda is such a good friend, she can cheer me up, too.

Any part? I’d have parents who had regular jobs and lived in one town. My brother Cole and I have to worry about them all the time. They are musician/dancer/singers who trot the globe with their wildly successful act. In fact, Cole doesn’t bear his share of the worrying. It’s mostly me.

Mrs. Gerg, bless her heart. She can’t help trying to do nice things for me. Her idea of nice, though, is picking up cast off junk at garage sales and giving it to me. Since she’s also my landlord, I can’t chuck all of it. She comes in sometimes and would notice if nothing she ever got me is on display. So it’s all on display. I even had to buy another shelf. Luckily, she doesn’t pick up large items.

I wouldn’t mind being Yolanda. Her parents hover and her father treats her like a child, but they hand her money all the time. And they’re here—they live right outside town. She has a huge safety net. It also looks like she might have a love life. I’m pretty much lacking in that department. Every time I think a guy is working out, he’s not.

She used to live outside Austin and loves the vineyard-studded Hill Country where Fredericksburg is located. She’s now in Knoxville TN, near some of her grandchildren. The third in this series, Into the Sweet Hereafter, came out in March, and that was her lucky thirteenth novel. She’s also written about 50 short stories and loves doing those!

You can find pretty much everything about her at her website, including an audio free short story and links to her other social media accounts and a couple of blogs.

I have no idea. You’ll have to ask Kaye. But if you’re interested in knowing what she’s doing next, she’s continuing to work on the third in book in her People of the Wind series. These are books set 30,000 years ago at the beginning of the last Ice Age and her main characters are a small Neanderthal tribe. She’s also always working on more short stories.

Thanks to the readers here for stopping by! There is another free short story for you if you sign up for Kaye’s newsletter. She tries to keep her fans up to date with it, bringing out a new edition about quarterly-ish, unless there’s breaking news. Stay safe, everyone!

Into the Sweet Hereafter

Spring has sprung in the charming tourist town of Fredericksburg, Texas, and one of the tastiest attractions is a trip to Tally’s Old Tyme Sweets—until a bizarre burglary leaves a bitter aftertaste...

Tally Holt is thrilled to see her new replicas of vintage sweets displayed in the window of Bella’s Baskets, a gift basket shop owned by her friend, Yolanda Bella. There’s just one problem—the creations appear to be melting. The ladies assume the culprit is the broiling heat of the Texas sun—until that night, the store window is smashed, and there’s only one thing missing: the replicas.

Tally is positively stumped. Clearly, the useless fake candies are more special than she bargained for—but why? When a rash of seemingly unrelated burglaries sweeps through the area, Tally is determined to sleuth out the answer—and stop a thief from killing more than the town’s appetite...

I want to thank you for interviewing Tally! Ignore everything she says about me. She has no idea how hard she is to deal with, always wanting this perfect little life when she's IN a murder mystery.

Great interview, Tally! I'm a sucker for sweets and I'm rooting for you.