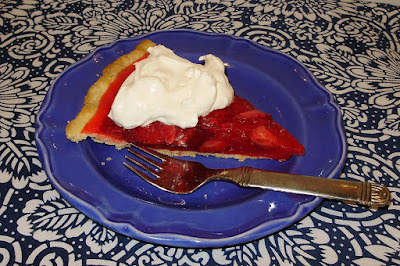 Peggy Ehrhart is a former English professor with a doctorate in Medieval Literature. She currently writes the Knit & Nibble mystery series about amateur sleuth, Pamela Paterson, founder of the Knit & Nibble knitting club. Peggy herself is a devoted crafter, dating from her membership in 4-H as a child in southern California.Learn more about Peggy and her books at her website.

Knit and Nibble member Roland DeCamp prides himself on rising to the occasion with a dessert goody to serve at break time when the Knit and Nibble knitting group meets at his house. He’s not an experienced cook, however, and so I enjoy finding recipes for him that don’t tax his cooking skills. 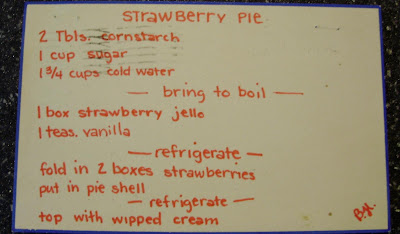 It's also one of the first desserts I learned to to make, taught to me long ago by my best friend in high school. After I'd gone away to college, I wanted to make it for a boyfriend, and I wrote to her, asking for the recipe. She mailed it to me on a postcard that I still keep in my recipe file.

Coincidentally I recently revisited a fascinating cookbook that surveys the favorite dishes of U.S. presidents all the way back to Washington. Molded gelatin creations were a feature of elegant dining for centuries, but in earlier times they were much more labor-intensive than the recipes we can create now with a box of Jell-O.

A recipe for “Wine Jelly” from Jefferson’s era starts with instructions to boil four calves feet! This step provided the collagen that created the gelling effect. Another source of collagen was isinglass, made from dried fish bladders. A modern food writer has noted that these early gelatin desserts had to be quite aggressively flavored to cover up the lingering hint of beef or fish, and that they probably tasted less thrilling than they looked.

Jell-O, the convenient product in the little box, was trademarked in 1897, but it really came into its own in the 1940s and 1950s. My husband recalls with great fondness the Jell-O desserts and salads that were a feature of church suppers when he was a child.

I hadn’t made my friend’s Strawberry Jell-O Pie for ages, so I checked online to make sure Jell-O hadn’t been modified in the intervening decades to the point that my old recipe wouldn’t turn out right. But the versions I found online were essentially the same as the one on my recipe card—though you might note that I made a few tweaks in the recipe I give below. Touchingly, several people commenting on the online recipes observed that the results were just like what they remembered from their youth. 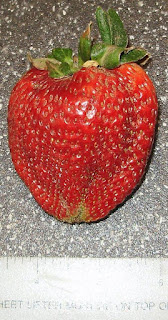 Strawberries, however, have gotten much bigger.

Roland’s pie is not difficult or time-consuming, especially if you use a premade pie crust and Cool Whip or aerosol whipped cream rather than whipping your own. But the pie crust needs to cool before filling, and the completed pie needs to chill for a few hours. So plan to start 4 hours or so before you want to serve the pie.

Fill the pie crust with the sliced strawberries. I like to arrange them so most of the red sides are facing up.

Combine the cornstarch, sugar, and water in a small saucepan. Bring it to a boil and simmer, stirring frequently, until it thickens and becomes less cloudy. This will take about 5 minutes.

Stir in the Jell-O and the vanilla until the Jell-O dissolves. Remove the saucepan from the heat and let the contents cool for half an hour. Pour the mixture over the strawberries and chill the pie until the Jell-O mixture sets, about 2 hours. Top each slice with a dollop of whipped cream sweetened to taste.

You can buy ready-made but unbaked pie crusts in the refrigerator section of your supermarket. The packaging usually explains how to bake them unfilled. Or you can make your own.

Sift the flour and salt together. Cut in the shortening using two knives, your fingers, or a pastry blender until the mixture resembles coarse sand. Sprinkle the water over the mixture while tossing with a fork until the dough clings together.

Flour your hands and gather the dough into a ball. Transfer it to a floured surface, sprinkle more flour on it, and press it into a disk. Using a floured rolling pin roll it into a circle a few inches larger than your pie pan. Turn the dough over a few times as you roll and sprinkle more flour on it and on your rolling surface. Fit the dough into your pie pan—it’s easier to do this if you fold it into quarters and then unfold it in the pan. Crimp the edges and prick it all over the sides and bottom with a fork. 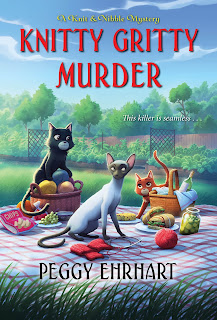 Pamela Paterson and the Knit and Nibble ladies have plenty of talents that don’t revolve around yarn. But their penchant for patterns has led to a dangerous hobby they just can’t quit—unraveling murders.

Most times of the year, the tight-knit community gardens in quaint Arborville, New Jersey, overflow with seasonal vegetables and herbs. But who planted the dead body? Farm-to-table enthusiast Jenny Miller had a cookbook in the works when she was suddenly found strangled by a circular knitting needle in her own plot. Now, the pressure is on Pamela and her neighbor Bettina as they weave together clues in search of the person who kept Jenny’s renowned heirloom plants—and budding career—from growing. With suspects and victims cropping up like weeds, it’ll take a whole lot more than green thumbs and creative minds this spring to entangle the crafty culprit . . .

Complete Your Assignment From
Help With Assignment