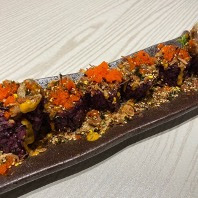 In her previous life Sophy Smythe was a Dutch medical doctor, specialising in chronic pain and burnout. Like her protagonist Charlie Martens, MD, she reinvented herself, and now writes fact-based mystery-thrillers. The Medical Code is her debut novel. Learn more about Sophy and her books at her website.

Like my protagonist Charlie Martens, I have a soft spot for sushi.

I’d like to share the chef’s recipe from the super-secret three-star restaurant in The Hague as mentioned in The Medical Code.

Put 1/2 cup of tempura batter mix in a glass bowl and mix it with 3/4-cup of cold water.

Sprinkle 1/4 cup of white breadcrumbs (or more, depending on the number of crabs) on a plate. Dip the soft-shell crab in the tempura batter, then roll it in the breadcrumbs.

Deep fry until golden brown. This should take two to three minutes or less. Let the fried crab cool on a paper towel. The paper absorbs excess fat.

Half a tempura soft shell crab

Sauce made of mayonnaise and chili sauce 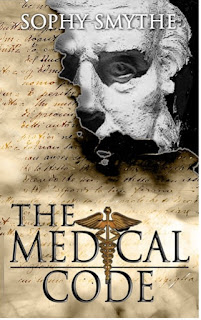 In the middle of the Covid-19 pandemic in Antwerp, Belgium, Doctor Charlotte Martens receives an urgent late-night call from her friend who is a member of the European Medicines Agency. The next day Charlotte learns that her friend was violently murdered and that she herself is now the prime suspect. Because the police find a baffling code beside the murder victim, Charlotte enlists the help of an investigative journalist. She and the journalist discover that her murdered friend was about to expose a conspiracy of fraud and corruption within the pharma industry involving the government, certain reputable doctors, and even the European Medicines Agency.

With both the police and the murderer closing in on them, Charlotte and the journalist must stay alive long enough to find the hard evidence necessary to bring down a faceless pharma company that will clearly stop at nothing to protect their secret network.