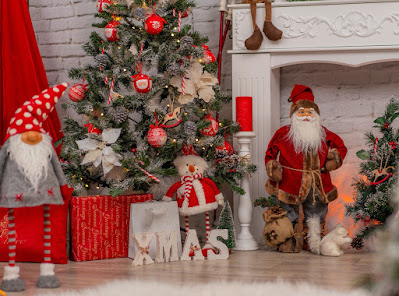 Years ago, I worked with a woman who retired and moved down South. The thing she missed most were the changing seasons, especially around the holidays. As far as she was concerned, Christmas lights should be strung on evergreens, not palm trees. And snow was essential, even though a white Christmas was never a guarantee, other than watching the iconic movie every year. It was the principle of the thing.

To compensate for her lack of a traditional Northeastern holiday, she’d be the first to admit she went more than a little bit overboard. First, she bought an artificial Christmas tree and left it up year-round. But that wasn’t enough. She then decided to buy artificial trees for each room of her new home. Some were small, some large. Some traditional, others, like feather trees, not so much. She strung lights and hung wreaths in every room and interspersed other holiday decorations throughout the house. Each room had a specific Christmas theme, such as Santas, or snowflakes, or angels. It was like living in a year-round Christmas shop. Or an extremely scaled down version of the Biltmore Estate at Christmas.

But it made her happy. And that’s all that mattered.

Has this anecdote made you want to get a jump on your holiday-themed reading? Christmas in July sales are just around the corner, but now through May. 19th you can grab an e-copy of the 2-book Christmas bundle of the Anastasia Pollack Crafting Mysteries, Books 7-8, which include Drop Dead Ornaments and Handmade Ho-Ho Homicide,  for only $.99. After the 19th, the set goes back to the regular price of $7.99. 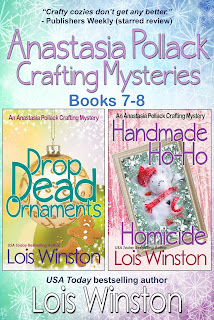 At the fair Anastasia meets Sophie's father, Shane Lambert, who strikes her as a man with secrets. She also notices a woman eavesdropping on their conversation. Later that evening when the woman turns up dead, Sophie's father is arrested for her murder.

Alex and Sophie beg Anastasia to find the real killer, but Anastasia has had her fill of dead bodies. She's also not convinced of Shane's innocence. Besides, she's promised younger son Nick she'll stop risking her life. But how can she say no to Alex?

Two and a half weeks ago magazine crafts editor Anastasia Pollack arrived home to find Ira Pollack, her half-brother-in-law, had blinged out her home with enough Christmas lights to rival Rockefeller Center. Now he's crammed her small yard with enormous cavorting inflatable characters. She and photojournalist boyfriend (and possible spy) Zack Barnes pack up the unwanted lawn decorations to return to Ira. They arrive to find his yard the scene of an over-the-top Christmas extravaganza. His neighbors are not happy with the animatronics, laser light show, and blaring music creating traffic jams on their normally quiet street. One of them expresses his displeasure with his fists before running off.

In the excitement, the deflated lawn ornaments are never returned to Ira. The next morning Anastasia once again heads to his house before work to drop them off. When she arrives, she discovers Ira's attacker dead in Santa's sleigh. Ira becomes the prime suspect in the man's murder and begs Anastasia to help clear his name. But Anastasia has promised her sons she'll keep her nose out of police business. What's a reluctant amateur sleuth to do?

Craft projects included in both books.

I had to laugh, Lois, as I do have a tree up all year--not the traditional kind of tree. It is white with bare branches and colored bulbs fixed on them. It makes me happy as I climb the stairs to the second floor and spy all its colors of loveliness.

Vicki, around here people have started stringing patio lights (which are basically white Christmas lights) on their decks and backyard fences, keeping them up all year. They put a smile on my face. I just wouldn't want to have to dust all those ornaments and decorations in every room year round!