Today we sit down for a chat with Lincoln Steele from author Patricia Bradley’s Natchez Trace Park Rangers series.

I was a successful FBI investigator/sniper. And I didn’t have PTSD from almost killing a ten-year-old boy. Oh, and thanks for giving me an opportunity to rat out talk about my author.

That I can adapt. If I can’t be an FBI agent, then I can feed my other love—history—as an interpretive ranger for the National Park Service.

I hate that I can’t overcome this thing about guns. After all, I was an FBI sniper…

What is the strangest thing your author has had you do or had happen to you? Going back to the gun thing—I just don’t understand why she had to do that. I mean, couldn’t she have just made me afraid of alligators? There’s plenty of them in the sloughs around Natchez.

All the time. It’s always about the gun thing. I mean, how can a former FBI sniper be a hero without a gun?

That Ainsley will be in danger, and I can’t save her. I let her down once, and I never want to do that again.

Having Ainsley smile that special smile at me. The one that says, “I forgive you…I love you…”

I would never hurt Ainsley like I did when we were in college. See, she had this great dream of being a country/gospel singer, and I told myself the music industry would chew her up and spit her out. I told myself I didn’t want to see her hurt, but really, I was afraid I’d lose her. I lost her anyway,

The escaped convict bugs me the most. He’s like a chameleon and I’m afraid he’ll get to Ainsley when I’m not around.

Actually, none of them. Because her dad was so controlling, Ainsley doesn’t let anyone get close to her emotionally, so it wouldn’t do any good to trade places with one of them. I’ll just have to prove to her I’ve changed so she’ll trust me again.

Patricia Bradley and her two rescue kitties Suzy and Tux live in Northeast Mississippi just four miles from Tennessee and twenty-five from Alabama. She’s a Carol finalist and winner of an Inspirational Readers’ Choice Award in Suspense, and three anthologies that included her stories debuted on the USA Today Best Seller List.

She sets most of her romantic suspense novels in the South, and they include the Logan Point series, the Memphis Cold Case Novels, and the Natchez Trace Park Ranger series. You can find links to her books at https://ptbradley.com/books/.

Patricia would love to connect with you on her blog—you see, on Tuesdays she writes posts with mystery questions, usually about dumb criminals. Three of the stories are true, but she makes up one of them. It’s up to the reader to guess which one she made up. Then on Fridays, she tells her readers about a book she’s read lately. And you can always connect with her at her website where you can find links to all her social media.

Crosshairs, my third book in the Natchez Trace Park Rangers series released Monday, November 1, 2021, and I just turned in the fourth book of the series, Deception. 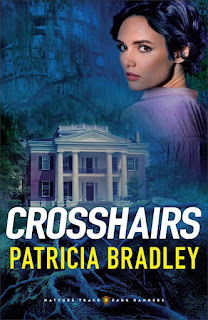 Investigative Services Branch (ISB) ranger Ainsley Beaumont arrives in her hometown of Natchez, Mississippi, to investigate the murder of a three-month-pregnant teenager. While she wishes the visit was under better circumstances, she never imagined that she would become the killer’s next target–nor that she’d have to work alongside an old flame.

After he almost killed a child, former FBI sniper Lincoln Steele couldn’t bring himself to fire a gun, which had deadly and unforeseen consequences for his best friend. Crushed beneath a load of guilt, Linc is working at Melrose Estate as an interpretive ranger. But as danger closes in on Ainsley during her murder investigation, Linc will have to find the courage to protect her. The only question is, will it be too little, too late?

Thank you so much for having me on your blog! Love the layout around here.

This was incredibly entertaining.

Poor Lincoln, it sounds like he's been through some rough times. Good interview, and congrats to Patricia on the recent release of Crosshairs!

Thanks, to you both! Glad you enjoyed the interview. :-)

You're very welcome, Patricia. Come back any time.