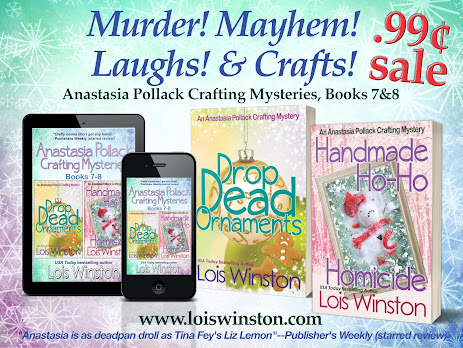 We Need a Little Christmas…Right This Very Minute…

Yes, Christmas. And yes, I know it’s not even Thanksgiving yet. However, today I’m channeling my inner Auntie Mame. If you don’t get the reference, click below to listen to Angela Lansbury singing the song from the musical Mame.

With everything going on in the world, who doesn’t need a little Christmas right this very minute? I know I do. The other day I stopped at a large home décor store in-between errands for the sole purpose of soaking up some Christmas vibes by wandering around their various holiday displays for a few minutes. Ornaments. Wreaths. Nutcrackers. Reindeer. It all taps into my inner child, puts a smile on my face, and makes me think of…

Yes, thanks to my author, I will now forever associate the holidays with dead bodies. That’s because Lois Winston wrote me into not one, but two holiday murder mysteries. Honestly, she couldn’t even cut me some slack at Christmas time?

The answer, of course, is no, she couldn’t. She told me it’s because cozy mystery readers love holiday-themed mysteries. So, if you’re one of them, you’re in luck because both of those books featuring me dealing with holiday homicides are bundled together and now on sale for a limited time for only .99 cents. It’s Lois’s gift to her readers.

As far as I know, she hasn’t yet written me into a New Year’s Eve murder, so maybe I can look forward to toasting in 2022 minus any dead bodies. And with any luck, maybe 2022 will be a huge improvement over 2021. 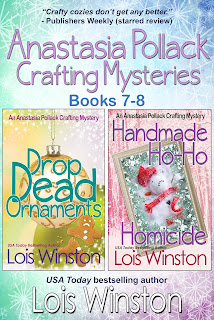 At the fair Anastasia meets Sophie's father, Shane Lambert, who strikes her as a man with secrets. She also notices a woman eavesdropping on their conversation. Later that evening when the woman turns up dead, Sophie's father is arrested for her murder.

Alex and Sophie beg Anastasia to find the real killer, but Anastasia has had her fill of dead bodies. She's also not convinced of Shane's innocence. Besides, she's promised younger son Nick she'll stop risking her life. But how can she say no to Alex?

Two and a half weeks ago magazine crafts editor Anastasia Pollack arrived home to find Ira Pollack, her half-brother-in-law, had blinged out her home with enough Christmas lights to rival Rockefeller Center. Now he's crammed her small yard with enormous cavorting inflatable characters. She and photojournalist boyfriend (and possible spy) Zack Barnes pack up the unwanted lawn decorations to return to Ira. They arrive to find his yard the scene of an over-the-top Christmas extravaganza. His neighbors are not happy with the animatronics, laser light show, and blaring music creating traffic jams on their normally quiet street. One of them expresses his displeasure with his fists before running off.

In the excitement, the deflated lawn ornaments are never returned to Ira. The next morning Anastasia once again heads to his house before work to drop them off. When she arrives, she discovers Ira's attacker dead in Santa's sleigh. Ira becomes the prime suspect in the man's murder and begs Anastasia to help clear his name. But Anastasia has promised her sons she'll keep her nose out of police business. What's a reluctant amateur sleuth to do?

I think Lois should write you into other holidays too; maybe Halloween or April's Fools Day. But be careful what ideas you might put into her head because she's always listening.

I am, listening, Kathleen! I don’t think Anastasia is going to be happy with either of us ;-)