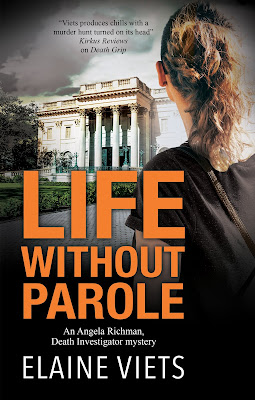 Elaine Viets has written 34 books in four mystery series. You may know her light-hearted Dead-End Job mysteries. Lately, she’s been writing darker mysteries, the Angela Richman, Death Investigator series. Elaine trained for the ultimate Dead-End Job when she took the Medicolegal Death Investigators Training Course for forensic professionals. Today she tells us about it. Learn more about Elaine and her books at her website.

Four in the morning. I was wrapped in the arms of my lover, sleeping the sleep of the satisfied, when my work cell phone rang. Damn. Someone was dead, probably murdered. Why couldn’t people die at a decent hour?

And Death Investigator Angela Richman is off to work, where she learns Chouteau Forest’s wealthy residents are targeted by the Ghost Burglars, who are killing the rich in their marble mansions. Publishers Weekly says “Life Without Parole’s”  “colorful characters match the crafty plot twists. Viets consistently entertains.”

I took a break from my Dead-End Job mysteries to write about a real dead-end job – death investigator. The Angela Richman series is set in mythical Chouteau County, a “ten-square-mile pocket of white privilege” near St. Louis.

Death investigators are sort of like forensic paralegals. They are trained, but don't have medical degrees.

Angela works for the Chouteau County medical examiner. She investigates all unexpected and unexplained deaths: accidents, murders, suicides. She's responsible for the dead person. The police handle the scene – everything but the body.

To make sure Angela had the most accurate forensics, I went back to college and took the Medicolegal Death Investigators Training Course, given by St. Louis University’s School of Medicine. Death investigators started in my hometown of St. Louis, Mo., in 1978 because there was a shortage of forensic pathologists.

My two-credit college course was five days, from eight in the morning to five at night. Students came from as far away as Australia. I sat between an Illinois police chief and a working DI from Austin, Texas.

Here's one day's agenda for the death investigator course:

In the morning, we learned about gunshot wound fatalities, explosion-related deaths, motor vehicle fatalities and drowning. At lunch we watched a video about teen driving and alcohol that made me want to trade my car for an armored personnel carrier.

Then it was alcohol-related deaths, suicide, blunt-trauma fatalities and more. I was grateful that the airplane crash investigations weren't on the same day I flew home to Florida.

For more than eight hours, the death investigator course listened to lectures by police and pathologists. We studied photos and videos from crime scenes and autopsies. I'm sure if I saw – and smelled – real autopsies, I'd be pea green and upchucking. The photos gave me enough distance that I could tolerate the gruesome illustrations. By the end of the course, I even watched an autopsy video during lunch.

The course gave me an appreciation of forensics – and made me a temporary vegetarian. It was months before I could eat pasta with red sauce or cut up a chicken. After all, people are a hundred-plus pounds of raw meat.

One pathologist showed us slides of his tattoo collection. A spider web tattoo can hide the track marks of a drug user.

If you see someone with a "Born to Lose" tattoo, look out. That tattoo almost guarantees you'll live up that promise. I lost count of how many times I saw that tattoo in autopsy photos.

The most dramatic was a man with “Born to Lose” in black Gothic letters on his forehead.

Right under the bullet hole.

Chouteau Forest’s wealthy are being targeted by the Ghost Burglars, who’ve carried out twelve burglaries over two weeks. So far, there’s been no bloodshed . . . until Tom Lockridge is brutally slain inside his marble mansion during the latest raid.

Angela Richman, death investigator for Chouteau County, is called to assess the scene and the body by Detective Jace Budewitz. As they investigate, Jace becomes obsessed with proving the Ghost Burglars weren’t involved in the murder.

Can the burglars be ruled out so easily? Is there more to Cynthia Lockridge, Tom’s wife, seeking solace in the arms of the ambitious local lawyer Wesley Desloge? What about Tom’s long-suffering daughter, or his loose-lipped housekeeper or office manager? Everyone is keeping secrets, but whose erupted into violence that fateful night?

When was in the Army in Japan, we had a variety of lunch-time menus, depending on the day of the week. The days we had macaroni and cheese in tomato sauce were special. When the guys would see those jumbo tubes of rigatoni in blood-red sauce, they'd always yell out, "Oh good, Train Wreck!"

Ugh, Jim. That sounds bad, even for Army food. Thanks for stopping by.