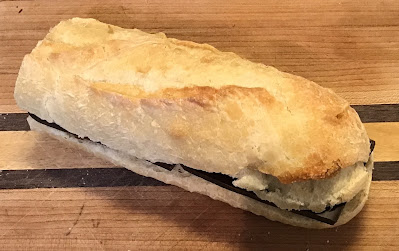 Melissa Yi is an emergency physician with an active practice and an award-winning writing career. Learn more about her and her books at her website.

What if you were kidnapped for Christmas?

Dr. Hope Sze, resident doctor on call, runs through the obstetric ward amid tinsel and fake candy canes. One minute, she's arguing with the senior resident over who gets to deliver the next baby. The next minute, a killer presses a gun to Hope's temple.

Stockholm Syndrome had two major inspirations. First of all, I'm an ER doctor, and after an incident with a prisoner who escaped police custody, where I could have been injured or killed, I started researching hostage takings at hospitals.

The first hit was the crisis at the Budyonnovsk hospital in Russia, where Chechen rebels took 1500 or more people hostage.

The second hit was the hostage taking at the Alta View Hospital in Sandy, Utah. A man entered the hospital with a revolver, a shotgun, and dynamite, intent on killing the gynecologist who had performed a tubal ligation on the man's wife. Unable to find the doctor, the man focused on another roomful of hostages: a woman giving birth, her family, and two nurses.

Boom. That was my second real-life inspiration. I knew that when Hope stepped on the OB ward, she'd get swept into nightmare scenario #2 at her hospital in Montreal, Canada. But how could I possibly write her out again, let alone the woman in labor, a newborn baby, or any other innocent people?

I hope you enjoy reading Stockholm Syndrome as much as I enjoyed writing it. Here’s a recipe to keep your stomach from growling as you turn the pages!

an ample amount of excellent chocolate (whatever and however much that means to you.)

Cut the bread in half lengthwise. Layer the chocolate inside the bread and put it back together, so that it’s a chocolate submarine sandwich. Wrap the baguette well, put it in your backpack, and either go hiking or, if you’re me, hunt down some murderers. The heat from your body melts the chocolate into the bread, and voilà!

Please note that I first heard this recipe on CBC Radio, but I can’t remember which cookbook it’s from. I apologize to the authors.

Also, once I brought the bread and chocolate to a potluck, and we baked it in the oven instead of running around with backpacks, and the women wouldn’t eat it. Too scared of carbs and chocolate. But I ate it, because life is short, killers make it even shorter, and dark chocolate contains flavonoids. 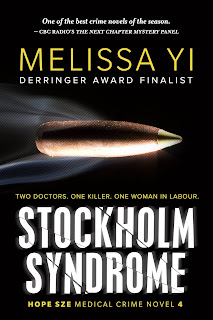 A killer infiltrates the obstetrics ward of a Montreal hospital, taking one pregnant woman and one resident doctor hostage at gunpoint. Dr. Hope Sze struggles to deliver her patient’s baby with blood on the floor and death in the air. And when Dr. Tucker tries to rescue their tiny crew, only to end up hostage material alongside them, Hope’s heart just might break, even before the kidnapper drills a bullet through her skull.

Thanks for having me.
I'd also like to invite everyone to my virtual speakeasy book launch on December 1st at 7:30 ET. Come mix a new cocktail with artisan distiller Nathalie Gamache.
You can bring your pain au chocolat.
1920's wear optional but highly encouraged!
https://www.library.cornwall.on.ca/events/virtual-speakeasy-book-launch-white-lightning-melissa-yi