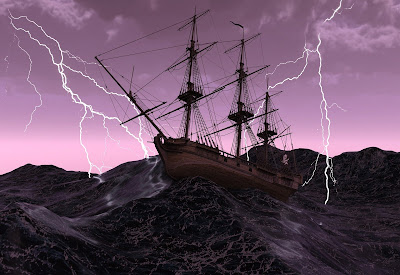 Jeannette de Beauvoir is a bestselling author of mysteries and historical fiction—and work that interweaves the two. Learn more about Jeannette and her books at her website.

Some Yo, Ho, Ho Winter Holidays

It’s a strange holiday season out on the tip of Cape Cod. While the small town of Provincetown is bustling with visitors and celebrating its annual “Holly Folly” festival, wedding planner Sydney Riley is worried. Part of Black Sam Bellamy’s treasure has washed ashore, and far too many people are more interested in pirate gold than they are in either the festivities… or an unsolved murder from the past that’s reaching long tentacles into the present.

And when she literally trips over a body, she knows it’s time to do something about the situation.

Cape Cod is home to the only authenticated pirate wreck, the Whydah, which sank off Provincetown in a storm in 1717. The irony is that the pirate fleet shouldn’t have been anywhere near shore—it was transporting its loot from the Caribbean to safe haven in Canada—but the handsome Sam couldn’t resist a stopover to see his lady love, Maria Hallett, and paid for it with his life. I spent a lot of time researching pirates in general, and Bellamy and the Whydah in particular, as I created a fictional addition to his fleet, a ship I called the Mignonette, which a character in the story plans to locate and possibly plunder.

One thing I learned is the origin of the term buccaneer, often applied to pirates. The French word boucanrefers to smoked meat slowly cured on a grate over an open fire. Hunters in the Caribbean cooked, cured, and sold this meat to pirate-ship captains, and these hunters and cooks became known as boucaniers or “barbecuers.” Once they realized the wealth of those buying their meats, however, they gave up on the cooking and started to attack their customers’ ships instead… essentially becoming pirates themselves. (I can’t help you attract pirates, but here are some tips for trying out a primitive barbecue such as boucaniers might have used!)

Another interesting sidelight is the surprisingly democratic nature of piracy. Everyone on board got to vote on decisions, and everyone shared equally in the plunder. Pirate ships welcomed crew of all races and even, occasionally, a woman. And Bellamy, in particular, never took a life during his career: the image of “bloodthirsty pirates” is simply inaccurate. It was very much a matter of redistribution of wealth.

In the meantime, back at our story, Provincetown’s beloved holiday traditions carry on despite the excitement over pirate gold: the lighting of the festive lobster-pot tree celebrating the commercial fishing fleet, the official lighting of the Pilgrim Monument, Souper Saturday to benefit the soup kitchen, and finally Holly Folly week itself, filled with concerts, a trolley tour, shopping bargains, and—um—Santas in Speedos. (Sydney has something to say about the latter curious custom, but it raises money for charities, so…)

A Fatal Folly is a combination of murder, merriment, and pirate treasure that’s sure to delight  readers looking for a slightly different take on the holidays! 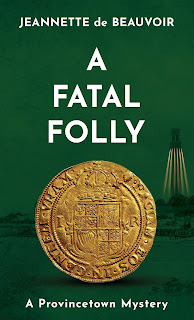 Winter is arriving in Provincetown, and Sydney has her hands full with events at the inn, friends in town, and the dreaded arrival of her parents for part of the holidays. Her boyfriend Ali isn’t there to be part of it; he’s been sent undercover to work in California. But while the town’s beloved events unfold—the Lighting of the Monument and the lobster pot tree, Holly Folly with its exuberant festivities—another excitement grips P’town as an enigmatic Englishman arrives, poised to raise the Mignonette, part of Black Sam Bellamy’s fleet of pirate ships that sank off the Cape Cod coast. But first he raises a more recent tragedy, a fishing-boat that disappeared five years ago, a cold case for law enforcement as the captain was found on land with a bullet in his head. His isn’t the only body complicating the holidays: Sydney literally trips over Pete, one of the assistant harbormasters, who’s been murdered and dumped on MacMillan Pier. How are all these events connected? Sydney will have to work hard to find out, before these become her last-ever holidays.