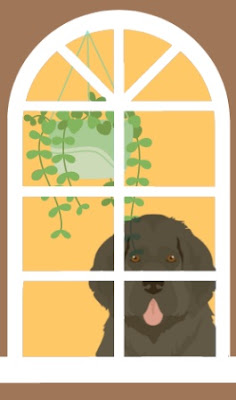 Today we sit down for a chat with William from cozy mystery author Elle Hartford’s The Alchemical Tales.

Well, it was a little frustrating, if I’m honest (don’t tell her that, though.) I’m a magical familiar; a sorcerer made me with a spell. But even though I can talk and reason and do protection spells just as well as anyone else—or even better!—people insisted on just treating me like a big black sheepdog. Talk about judging a fairy tale book by its cover!

I’ve got a clear head. Take my friend Red, for example—she’s an alchemist, and normally she’s very clever. But sometimes she gets all mixed up and tries to make friends with a bad guy, and that’s where I come in. I always have perspective on things. Me and Red traveled a lot together before we got to Belville, and I always keep her safe.

I’m too fluffy. Everyone keeps calling me a “dog.”

The whole carousel horse thing was pretty weird (you can read all about it in The Carousel Capers, so I won’t bore you with the details here.) And so was standing outside in the rain running a booth at a fair—but that was mostly Officer Thorn’s fault.

Of course! I’ll argue with anyone who’s trying to boss me around.

Losing Red. She’s the one who gave me a chance at having a real home.

Walking under the stars at night, sharing gossip with a gnome named Dusty, and, okay, I’ll admit it—looking after Red.

I spent way too much time with that boring sorcerer, waiting to figure out what I wanted for myself. I should have gone out traveling much earlier. Then I would have met Red sooner.

Officer Thorn. She may be a good friend to Red, but she’s too bossy. Since when does being a police officer in a fairy tale town mean you know better than everyone else?

I wouldn’t trade place with anyone—I’m perfect as me!

Elle adores cozy mysteries, horses of all stripes, and above all, learning new things. As a historian and educator, she believes in the value of stories as a mirror for complicated realities. She currently lives in New Jersey with a grumpy tortoise and a three-legged cat.

Apparently, she’s been putting up stories about our holidays on her website. She also blogs way too much, if you ask me. Isn’t she supposed to be writing sequels for us?

I have a starring role—of course!—in the upcoming novel Beauty in the Alchemist. You all can read it starting August 12. Then you’ll see how I solved an ancient mystery, and how Red would be plant food at a haunted castle if it wasn’t for me! 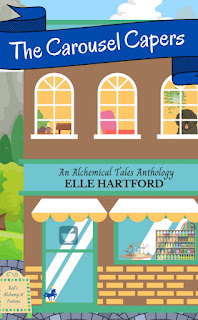 Life is no fairy tale in the magical small town of Belville. When Red buys her dream storefront in the quaint Market Square, she knows she’ll be putting in hard work to make it a success.

But what Red doesn’t expect is a tiny antique carousel horse statue turning up in her mail. And she isn’t at all prepared for the slew of criminals and friends, greed and mystery that follow in its wake! It turns out that the carousel horse has a deep, dark secret. If she wants to head off doom, Red and her friends will have to brave ghostly forests, watery depths, wild mine cart rides, and even a fancy party or two.

In this series of short stories, each chapter focuses on a new carousel statuette–and a new mythical horse!

ebook (free when you sign up for Elle’s newsletter)