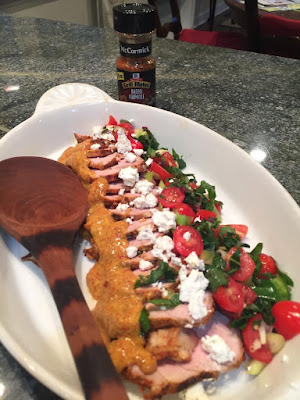 Devon Delaney is a former computer educator, grandma and longtime cooking competitor with many wins under her apron. Learn more about her and her books at her website.

The Recipe Behind Murder Mysteries

Recently I was invited to speak to seventh and eighth graders at the school I attended from kindergarten through ninth grade. Their book fair week hosted authors as well as parents, who spoke about their interesting career choices. The school librarian who arranged the talk was very interested to have me share the role recipe contests played in inspiring my plots. I eagerly accepted the invitation.

As I delivered my talk, I feared losing the interest of the young minds as soon as I launched into how writing a winning recipe closely resembled writing a good mystery. On one hand, I was the students’ hall pass from math class or social studies, as a specially scheduled assembly. A plus for their willingness to attend. On the other hand, I have a teaching background, so I interjected a lesson in proper writing techniques. As I spoke, over my head was a huge screen projecting photos of me with various celebrities, such as Guy Fieri and Kelly Ripa. The kids liked that – a lot. When I was sure I had their attention with visual stimuli, I sought the teachers’ blessing that my talk would benefit the kid’s brains, so I went through the number of ways recipes and mysteries complimented one another.

This age group loves jolts of immediate exhilaration, so I focused on my cooking win highlights. I wanted to get my main point across, how writing recipes, something I’d done successfully for years, is a lot like writing a book, while keeping the entertainment factor steady. I hit my young audience with points to ponder. A book with a catchy title is like a well-named recipe. A winning recipe that catches the judge’s eye must have a tasty title to peak initial interest. For example, I won $40,000 with a recipe titled Ranch Steak Bruschetta Salad. Four words that gave the judges a very good idea what my recipe was about, how it was going to taste and why it was different and more interesting than all the other recipes in the contest. Timing the projected photos of the printed recipe, book cover, and winning recipe overhead punctuated my words.

Relieved the faces in the audience were beaming with curiosity, I continued. Like a good book, a winning recipe has a clear beginning that draws you in, a middle that keeps you turning the pages, and an exciting end that satisfies and keeps you thinking about it long after the last word is read. Also like a good book, a good recipe has twists and turns along the way to set them apart. Clear writing and easy to follow sequence of steps are a must in both a recipe and a mystery. In both, you lose the reader with too much extraneous detail. Too many ingredients and the steak is no longer the star ingredient. Overdone wordiness and the mystery is lost in the sauce. Writing doesn’t have to be an abundance of words to get the point across. Word choice like ingredient choice is such an important part of the process.

I gave them an insight into what it took to get an agent and a publishing contract, which may have glazed over a few eyes, but I wanted them to appreciate the process. To draw the lost back in, I emphasized my love of writing picked up in first grade when we were asked to put together a captioned picture book of our families. Many nodding heads let me know I wasn’t alone with the sentiment. I wrapped up my talk by sharing my cooking competition series hook which they thought was amusing. Cooking competitions can bring out the best and worst in their participants. If the components get too heated, too spicy, or too overdone, bad behavior may be the only thing served up, and that is never an easy thing to swallow.

Success! I had more to share, so I hope I’m invited back next year. Share your wisdom, authors. Turns out the next gen are eager listeners!

1/2 cup cherry tomatoes, sliced in half

In a small bowl combine the sea salt, cumin, chili powder, coffee and black pepper. Rub both sides of steaks with the spice blend. Let steaks rest on a plate for 10 minutes.

Preheat skillet or grill pan to medium heat. Heat 1 tablespoon cooking oil and place steaks in pan. Cook steaks for 3-5 minutes on each side, until desired doneness. Remove steaks to a plate to rest for 7 minutes.

Slice steaks against the grain into 1/4-inch thick strips.

Assemble salad by giving each of 6 dinner plates a bed of arugula. Lay 2 grilled bread pieces on top of each arugula bed and lay a layer of steak strips across toast. Place a spoonful of tomato blend on top of steak and drizzle with horseradish Ranch dressing. So delicious! 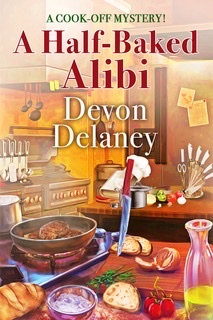 When the prize package for a cook-off comes with a dead body, it’s up to Sherry Oliveri to figure out who cooked the victim’s goose . . .

Sidelined by an injury, longtime cook-off contestant Sherry Oliveri has agreed to offer her wisdom and moral support to a friend who’s entering the Kitchen Royalty Cook-Off. She knows the key is to plan ahead for anything that could go wrong, but nothing prepared Sherry for discovering the event sponsor’s dead body hidden behind one of the appliances—or having her friend singled out as the most likely suspect.

Determined to get her friend out of hot water, Sherry sets her sights on the victim’s disgruntled wife and a vindictive rival sponsor. But her friend’s shaky alibi and the revelation that she may have been nursing an old grudge against the victim leave Sherry in a stew. Desperate to figure out who framed her friend, Sherry will have to sift through the clues and grill the suspects to bring a killer to justice . . .