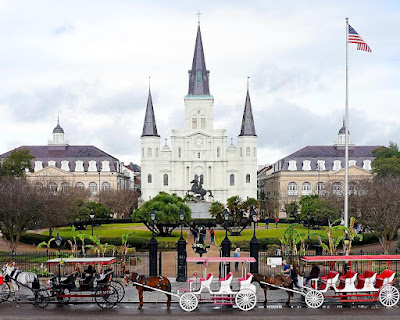 Cherie Claire is a native of New Orleans who thinks coffee and chicory and a hot bowl of gumbo make everything right in the world. Cherie is the author of two Cajun romance series and the Viola Valentine paranormal mystery series featuring a New Orleans travel writer who finds ghost mysteries to solve everywhere she travels. Learn more about Cherie at her website and her two blogs, Weird, Wacky & Wild South and Travel the South Bloggers.

My hometown of New Orleans is one of the most written about cities while also being one of the most misunderstood. All I have to do is mention the city of my birth and I’m bombarded with a host of comments, almost all of them false.

“You mean you’re from N’awlins?”

“I love that Cajun food!”

So, for all of you who wish to set your story in one of America’s most interesting cities, let me offer a few details to set the record straight.

Arguably, New Orleans was the country’s first melting pot. Founded by the French for Louis the 14th in 1699, the Louisiana colony and its capital city of New Orleans were later owned by Spain for about 70 years, then France again briefly, then the United States. Once the Louisiana territory became part of the country, it saw immigrations of Germans, Irish, and Sicilians. Today, visitors will find a host of nationalities, including Vietnamese, who settled in New Orleans East.

Which is why, most New Orleans residents don’t have a Southern accent! The city has a cadence and style all its own, with unique expressions such as “How’s yo momma and dem?” You’ll hear different types of accents and sayings depending on where “you got your feet.” (That’s a scam they play on tourists – don’t answer that if someone asks you!!)

One of the city accents is what we locals call a “Y’at” accent, as in our familiar greeting, “Hey Dawl, where y’at?” This accent’s similar to a Brooklyn accent, only slower and peppered with Southern expressions like y’all. We say things like “Gawd,” “Earl” for oil and “Warta” for water. Saints fans chant, “Who dat? Who dat? Who dat say dey gonna beat dem Saints?”

Still don’t believe me? View here for a video that showcases the city’s various accents. And if you want to see some of the city’s musicians chanting for their favorite football team, click here.

Mind you, you may hear a Southern accent on the streets of New Orleans, but chances are they relocated here.

Which brings me to the name. Think of someone from Brooklyn saying New Orleans, running the syllables together. That’s how a lot of us pronounce the name: Newawlins. Not N’awlins!! Someone heard us talking fast and came up with that moniker and spread it around but Dawl, we don’t say dat.

This one’s harder, because Creole means a lot of different things, depending on who you speak to and where they’re from. In New Orleans, it can mean a white person of European descent, primarily French and Spanish, or an African American, or an African American with mixed blood. I won’t make a statement here, less I get a Creole tomato thrown my way, but Creole cuisine is the style of New Orleans cooking that incorporates French, Spanish, African, Native American and other regional influences.

The Cajuns, on the other hand, are a group of people who arrived in Louisiana after the settlement by the French and Spanish. They were thrown out of Nova Scotia in waves of exile beginning in 1755 and many made their way to Louisiana where likeminded Catholics resided. The Cajuns mainly settled in the countryside so Cajun cuisine resembles one-pot cooking and country-style cooking techniques.

There’s much more to both of those unique American cuisines but that’s the difference in a nutshell. So, you may enjoy Cajun food in New Orleans, but know that it’s not indigenous. Creole cuisine is. If you leave the city and head into Cajun Country, you’ll find more authentic dishes there, plus it’s a whole other world, cher.

There’s much more to explain about my hometown. We don’t have rocks, for instance, since South Louisiana was formed by the muddy Mississippi. We have bugs and lots of them. Alligators. Nutria. It rains. A lot. And it’s brutally hot and humid in the summer and we sweat like pigs so if you’re setting a romance in August, you might reconsider having them stroll around town looking fresh as a flower.

Instead, let me leave you with some lagniappe (lan-yap), which means “a little something extra.” It’s a recipe my momma and dem taught me. 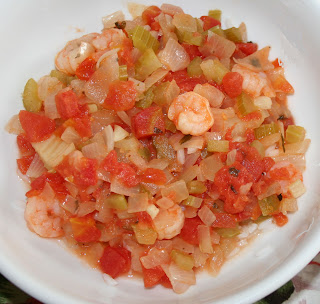 Salt and pepper to taste

Melt butter in saucepan on medium to medium-high heat. Sauté onions, celery, and green pepper until soft, about 5 minutes. Stir in garlic and sauté another 5 minutes. Add salt, pepper, dried basil, and a can of diced tomatoes and stir. Next add shrimp. If using frozen shrimp, add 1/2 cup of water and simmer for 10 minutes. If using fresh shrimp, add shrimp and 1 cup of water and simmer until shrimp turns bright pink, about 15 to 20 minutes. Do not overcook. Add Cajun/Creole seasoning to taste. Serve over cooked Louisiana rice. 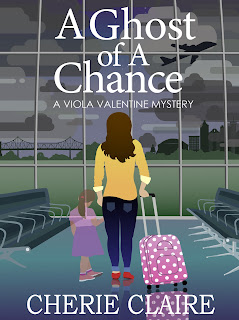 A Ghost of a Chance

The ghosts are stalking!

The hurricane gave Viola Valentine the chance she needed to leave her dead-end job and loveless marriage. But the storm also blew open a psychic door, one that Viola had worked hard to keep closed.

Her first day as a travel writer and ghosts who have died by water are demanding attention, asking her to solve their mysteries.

On top of it all, her goofy ex-husband isn’t about to let her go.

Can Viola Valentine insist on a clean slate while busy communicating with those on the Other Side? And will her new talent allow her to reach her daughter who died of leukemia years before?

You nailed it, sister! If you live in Cajun country, you can buy the blessed Trinity, onions, bell pepper, celery (and some parsley added) in a tall plastic container in the refrigerated section. It makes this recipe easy-breesy.

Love those!! I also love Cajun Power's roux in a jar, makes gumbo easier too.

It's wonderful to read about New Orleans the way we know it. One side of my husband's French ancestors arrived in 1721 (the Creole side), and helped the 'Cajuns' get settled, but he was born and raised in Cajun country, so claims both Creole and Cajun ancestry.
Thank you for sharing your mother's recipe. I'm going to make it.