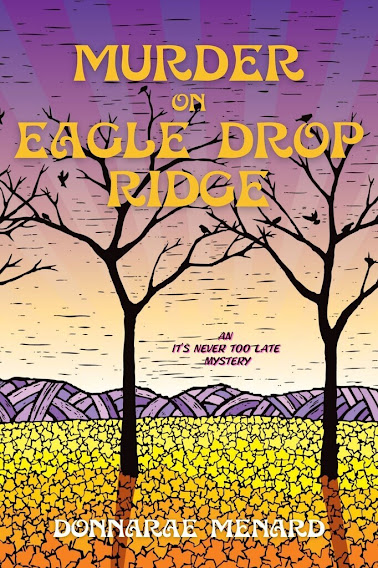 DonnaRae Menard started her writing career in seventh grade with a back-firing slanderous account of the jet set kids. Even though it took a while to develop the nerve to try again, she is out there plying her trade. Her second book in the It's Never Too Late series, Murder on Eagle Drop Ridge, releases in mid-June. Learn more about DonnaRae and her books at her website.

Being a Team Player

Every one of us, every writer, reader, fan, we all started out the same way. With a spark of interest. For some, it may have matured to where we live voraciously through the written word. Our eyes dictating what all our senses are going to feel. There's no problem with that. Maybe we love all things printed, maybe a select style and specific authors. Again, no foul. For others, it goes further.

It's amazing how many fans will invest the same money and time as an author to attend a function where authors run amuck, like damsels at a renaissance fair. Myself, I've been writing for more than fifty years, but other than my family, I never shared.

It took years for me to even enter the room where an author held court with the public. I went once. I was hooked. If an author was having a library talk, an open book event, or a meeting in the park, I wanted to be sitting in the back row hearing what she or he had to say. I listened to the how-I-got-here stories, or where the inspiration came from. There were authors who spoke of accolades I'd never heard of. I could see their pride in achievement, and I silently applauded them. I met gushing fans, other wannabees; I stayed silent holding my council.

In every talk, I searched for the kernel. As a general rule, it was there. I listened to lawyers, judges, journalist with stories to tell. Then there were others who just had an overpowering drive. It was all awe-inspiring.

The first writer's convention I attended was at Westbrook College in Portland, Maine. It was a single day event. I was hired to drive an elderly author who attended my writers' group. Being familiar with the area, I knew I could keep myself busy for the day. Then, I changed my mind. When the rush got thick, I walked in. I didn't have a ticket for the lunch, but no one asked me.

When Joanne Clarey, my author friend, was ready to leave, I couldn't wait to tell her all I had learned. Joanne didn't berate me for crashing the function. Instead, she offered me the same advice Julia Spencer-Fleming did at Malice. Learn it all, open your mind, and when you have it, share it with someone who doesn't.

It's a good thing to remember, and it softens the blow when you attend a function where an author/agent/publisher is presenting, and some newbie asks a question, only to be ignored. I've been the newbie. I felt the chill and the shame of opening my mouth. But times for me have changed. I've met a lot of authors in the past couple of weeks, wonderful people who filled my heart. I want to be like them. To be patient and sharing. That's the team player.

In a business where, mostly we work alone with maybe a cat to share our coffee breaks, when you get to a place where someone is searching for the next step, reach out and pull them aboard.

Things are looking up for Katelyn Took, she has a job, a roof over her head, a new love, and she's down to fourteen cats. If it weren't for the human remains, she fell into on Eagle Drop Ridge, she'd be over the moon. Then things start to slide. Before she recovers from falling into the first set of bones, a second set of remains are discovered fifty feet down at the bottom of the ledge. She knows there has a connection, even though the father of the male victim, says no. His tunnel vision is mirrored by the sheriff, who's main focus is the woman. Katelyn just wants it all cleared up before the climbing company that's considering renting the ledges drops out. It's a balancing act with the media thrown in for added confusion, and somehow the fate of her new love is jeopardized. Then Katelyn finds a small, shiny clue. What is she going to give up for peace of mind, or rather, what is going to be taken from her?

Great post, DonnaRae! I've been that newbie as well, shaking in my shoes.

Now that I'm an "established" author, I love paying it forward. It's really important that we support each other.

Thank you Kass, for Identifying with this nervous nellie! You're always so helpful, it's hard to believe you wouldn't have always been doing this.
xo
DonnaRae