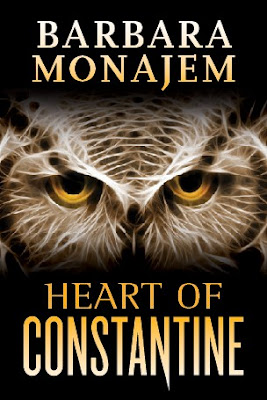 Barbara Monajem started writing at eight years old. She has wandered from children’s fantasy to paranormal and historical romance, with mystery thrown in whenever she can make it fit. Learn more about Barbara and her books at her website. – AP

Why a Native American hero?

The reason goes back all the way to my childhood. I grew up on the west coast of Canada in a land of cedar trees and totem poles, and the First Nations art of that region has always had a powerful effect on me—it grips my solar plexus and won’t let go.

Much later, after moving to the American South, I spent a lot of time visiting prehistoric sites—mostly what are called Indian Mounds—in Georgia, Alabama, Mississippi, and Missouri. I relish the sense of the sacred one gets while visiting these mounds. I found them inspiring, and ages ago I started a mystery which began with a girl who had been drugged and left on the top of one of these mounds.

Later still, for several years running, my family spent several Christmas vacations in Arizona, visiting a friend who taught school on the Navajo Reservation. I had read several of Tony Hillerman’s fabulous mysteries about that area, which made visiting there doubly interesting. I read up on Navajo culture. We went on long walks and visited Anasazi ruins. We ate fry bread and Navajo tacos.

Put all this together, and somehow I ended up with a story about Constantine Dufray, a telepathic half-Navajo who was born out west but moved to New Orleans when he was eight years old, and grew up to become both a rock star—because New Orleans is the home of such great music—and a vigilante in the kinky little city of Bayou Gavotte. He came into being over the course of several versions of the story which began on the Indian mound. He was a secondary character (who almost took over) in the first two books of the Bayou Gavotte series. Eventually I knew more or less who he was, what had happened to shape him, and also what sort of woman could handle him. Finally, I got to write his story—Heart of Constantine.

Vigilante Native American rock star Constantine Dufray has hit rock bottom. His telepathic abilities have spun out of control, and destructive rumors about him run rampant. Some are true—he caused a violent cop’s suicide, and telepathy destroyed his marriage—but he didn’t poison his wife, and he couldn’t have caused riots at his concerts, killing his fans…or could he? Now an unknown enemy is trying to frame him for rape and murder.

Aura reader Marguerite McHugh finally gets a close encounter with the mysterious star, but it’s nothing like she expected. When Constantine finds her after she’s been drugged at one of his shows, she’s pulled into his quest for the truth. As dangers mount and murders pile up, Constantine and Marguerite are forced into an ever more intimate relationship. Only by facing their fears and working together can they unmask the killer before more innocent people die.

It's hard to read the "prove your not a robot" thing so my post will probably not go through - but if it does, I'm so glad you've made your hero a Native American, other than Tony Hillerman I can't think of another author who routinely has a N.A. main character. Since I am N.A. my character "Gary" in my "Immortal Relations" is part N.A. (so maybe that makes him one of the first N.A. Vampires when he is changed?) LOL

Your books sounds very interesting, Barbara! I'll look for it.

I love your writing and can't wait to read this book.
I also have a Native American character in my up coming novel, Lakota Dreaming.

In fact, I believe you've read parts of it.

First off, wanting to say what a great novel this is. I've read all the Bayou Gavottes and I think Constantine's story is the best so far. I agree about the sense of the sacred, Barbara. Being from Georgia and having visited the Ocmulgee Indian Mounds both while they were being excavated and later on, I was always impressed by the slight frisson I experienced when walking into the Meeting Chamber and seeing that giant clay Eagle built out of the floor or going to Rock Eagle and seeing the gigantic bird formed by larges pieces of granite which can only be seen clearly from the air.

Hi, Vamp Writer. I know what you mean about proving you're not a robot. Sometimes I think a robot would read it more easily than I can!

I've read most of Tony Hillerman's books and loved them. Also, Margaret Coel wrote some good mysteries with a N.A. main character, and I really enjoyed a couple of books by Sherman Alexie.

Hi, Rose -- Thanks. I'm with you about rich detail. It really brings a story to life. :)

Hi, Karen -- Thanks! I hope you enjoy the story.

Hi, Connie -- Yes, I remember reading parts of Lakota Dreaming. Hopefully I will soon get to read the rest!

Hi, Tony-Paul -- Thank you so much. I'm really glad you enjoyed Heart of Constantine so much.

I visited Rock Eagle on a field trip with one of my kids, ages ago.

Barbara, loved hearing about Constantine in the first books, which are so vivid with characters you can't forget. So glad he's got a bigger role in your new one. Will be on my list, for sure. Nice to "see" you today here.

Hi, Sharon! Thanks for the kind words about Constantine. :)

What a fascinating book premise, Barbara, and hero. Best wishes with your book!