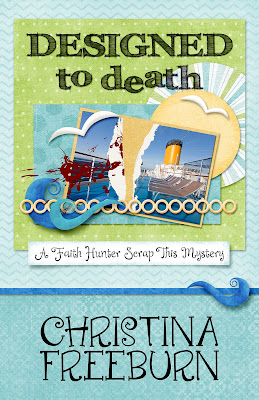 Today we have a guest crafter joining us, Christine Freeburn. Christine’s The Faith Hunter Scrap This Mystery series brings together her love of mysteries, scrapbooking, and West Virginia. When not writing or reading, she can be found in her scrapbook room or at a crop. Learn more about Christina and her books at her website and blog. – AP

Like with most creative pursuits, there are times where nothing looks right. Writers have writer’s block. Scrapbookers get scrapbooking block, and that’s where scraplifting comes in. For those who aren’t familiar with the term, scraplifting is when scrapbookers copy a layout design they’ve seen in a magazine or in an online gallery when they want to create but nothing on a page looks right. Scrapbookers can also be inspired by an album cover, book cover, or advertisement they’ve seen.

Today, I’m scraplifting the lovely cover of Designed to Death, the second book in my Faith Hunter Scrap This Mysteries Series. I love the color combination and the dimension the stacked embellishment gives the “layout.” (see cover above.)

I stuck to the same color palette of the cover—blues, greens, yellow—and mixed in some red since the topic is the Disney Fantasy ship (doesn’t say Disney without some red.) For the torn photo element, I used two photos of the ship and put them at an angle with the ends touching to give the same effect.

For the embellishment cluster, I used one premade embellishment, separating it into three parts so the page had a cohesive look. I had a lot of Disney themed stuff, but the brighter colors didn’t work and I wanted more of a “travel” theme for the page. I removed the twine string from the tag and cut off the phrase element.

The main piece of the tag became the sun overlapping the photograph part from my inspiration design. I tucked the base of the tag behind the periwinkle border and overlapped the circle portion so a portion rested on the yellow photo mat.

The saying was used in place of a title at the top of the page. The twine became the yellow circle border used on my inspiration piece. I loved how one embellishment could fill the role of three separate ones from the scraplift.

To finish off the page, I used washi tape (my “Disney red” addition) to mimic the border of the bottom page. Instead of a wave embellishment, I used a die cut I made with Pack Your Bag cartridge for the Cricut.

And here is my completed layout, the design scraplifted from the cover of Designed to Death. 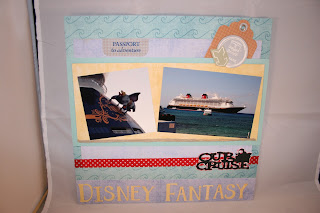 Faith Hunter planned the perfect event at her grandmother’s shop, Scrap This, featuring local scrapbooker and Life Artist Diva, Belinda Watson. But the extravaganza goes up in a cloud of glitter when Belinda and her cousin, Darlene, brawl over scraplifted designs. Faith attempts to break it up but only makes things worse. Then when Belinda turns up dead behind the Scrap This store, Faith’s involvement goes viral.

As accusations against her turn vicious, Faith sets out to prove her nemesis Darlene committed the crime, only to realize they are both innocent. Now they must team up or the murderer’s plan will come together seamlessly with the frenemies sharing a jail cell—or worse, a funeral.

Scrapbooking is new to me. An interesting way of expressing our creativity. Makes me think of quilting, but maybe the two aren't similar.

I wish I were that organized! Instead, the DH and I have stuff saved in Rubbermaid containers.

I like to quilt and scrapbook--they feel similar to me, like piecing together a puzzle. Lovely layout. Best of luck to you, Christina!

Christina and I are "kindred spirits." I have scrapbooks for everything!!

I also do some quilting and in a way it is similar by picking a design and playing with the fabrics until you get the "right" look. Though, I find scrapbooking a little easier as the "size" is smaller.

This article is mind blowing. When I read this article, I enjoyed.