What was your life like before your author started pulling your strings?
My life? I didn’t have much of a life after I lost my wife Claire, and Ellie, my beautiful three-year-old girl. They died in a house fire three years ago when I was undercover for LAPD. The circumstances were suspicious, and I started a lawsuit against the LAPD that got me fired. My dream is to open my own gym and find out who was behind the fire that killed my family. But you know, when I’m desperate to pay my bills, I work as a stuntman for Prestigious Studios. I still take on one of their gigs when money is low.  The work is fun. I get to meet many stars. Most (not all) are just plain folks with a special talent trying to live their lives.

Before these writers came along and threw a couple wrenches into my life, I was having nightmares from my time in Korea. Even with the distraction of interesting cases, I still wake up in a cold sweat— but only once in a while.

What’s the one trait you like most about yourself?
About the time Lynn and Zeilinger wrote their first story for me I inherited a detective agency from my late wife’s brother. He’s going to be out of the picture for three to five years.

The LAPD taught me how to be a pretty good investigator, so I got together with my partner Casey Dolan. Our clients are happy in the end, some are saddened, but the mystery is always solved. I must say that my detective agency, D&D Investigations has brought in interesting cases. I’ve doubled the amount of cases and money since I took over the agency.

What do you like least about yourself?
I don't trust anyone except my partner Dolan and Lory Carrington, my secretary. Even good people need to prove themselves to me. It embarrasses me when they prove they can be trusted and I’ve treated them badly.

What is the strangest thing your authors have had you do or had happen to you?
Everyone seems to want me to date again, but I have trouble leaving the memory of Claire and Ellie behind me. Along with that, women whose first names end in "y" are unlucky for me.

These authors keep naming the interesting women in my stories with first names that end in "y.”  Take Mary Black in my latest case, Slick Deal. This lady is the spitting image of Ava Gardner.  But they’ve written her so I can’t get too close. She’s a sweet girl and a stunning beauty. I’ll have to find a way around the authors’ plot ideas.

Do you argue with your author? If so, what do you argue about?
You should see the outlines these two make. It's horrific the way they have me fighting and getting beat up. I'd be exhausted to say the least. I don't always have to fight to get my point across. So I argue with them and try to get them to add more "reasonable" characters. They usually listen to me but only after the first edit.

What is your greatest fear?
Other than the outline? I'd say there are two things that I worry about in all four books:  One, that the bad guys gets away with the crime, leaving dead people in their path. It's never happened because I make sure the authors listen to me. And second, I miss not being in love, and worry love won't be in the stars for me... because of these word jockeys.

What makes you happy?
Memories of my wife and daughter and solving the unsolvable. And it's great to prove the "experts" wrong. I'm happy when my partner and I see eye-to-eye. Dolan and I go way back to our days at the LAPD, and since 1955 when I took over this business, we've worked well together, always have.

If you could rewrite a part of your story, what would it be? Why?
I would definitely change the names of the Femme Fatale's and not make their names end in "y". Many times I have to bite my lip, turn and walk away. Hey, it's not easy. Why you ask?  This may sound corny, but I'd like to fall in love again.

Of the other characters in your book, which one bugs you the most? Why?
In the first book, Slivers of Glass, I met FBI Agent Olivia Jahns. A gorgeous, smart and sexy women whose name doesn't end in "y". She keeps an eye on me and my partner. You’d think a lady like her could think outside the box once in awhile. Since she can't seem to do that, she could listen to me, but what woman ever does?

Of the other characters in your book, which one would you love to trade places with? Why?
Softy Moreno, a big time gangster in LA, He’s a really cool cat. I don't agree with his methods for getting things done. He's been my nemesis for four books now. I admire his charm with the ladies and his fortitude. When he makes a promise he never fails to follow through, good or bad. In Desert Ice he actually promised to get the person responsible for the violence that everyone blamed on him. And he did exactly that. Too bad the writers don’t let people like him tell their side of the story often enough.

Tell us a little something about your authors. Where can readers find their website/blog?

It amazed me how they make each book happen. They don't believe in just researching the mid-1950s. They have to experience each location before they put pen to paper. So they took me with them to rural Santa Rosa, California, pre-statehood Hawaii, gang-infested Las Vegas, and the sleepy town of Avalon, on Catalina Island. It's been a joy to travel with them and it's exciting to guess what they have planned for me. They each have a thing they call a website:
www.janetlynnauthor.com, www.willzeilingerauthor.com, and together they have a blog: www.themarriedauthors.blogspot.com.

What's next for you?
I enjoy staying close to LA, where my office has easy access to the film and TV studios. Traveling by rail or flying out of the area is time consuming and expensive. So I hope for the next one they'll let me stay in L.A. or Hollywood. There's plenty of excitement in both cities, but with these two authors... one never knows. 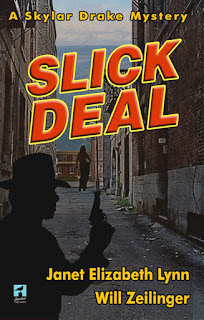 Slick Deal
On the eve of the New Year, 1956, oil tycoon, Oliver Wright dies suspiciously at a swanky Hollywood New Years Eve party. Some think it was suicide. His death is soon followed by threats against the rest of his family.

Twenty-three miles may not seem far away but false identity and corruption on this island could squash their efforts to answer the question—How in the world can a dead man commit suicide?

Hey, Lois thanks for the interview. Skylar here, I know my creators appreciate you hosting us. It looks great!

We were happy to have you, Skylar!