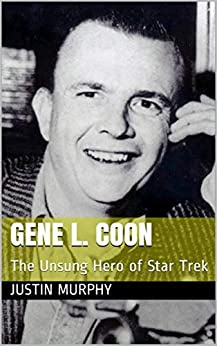 Whether fiction or nonfiction, Justin Murphy explores many themes in his work, including probing into the darkness of pure evil and exploring obscure figures often forgotten in entertainment, such as Gene L. Coon, an ex-marine, pharmacist, journalist, and the unsung hero of the original Star Trek franchise. Learn more about Justin and his books at his Facebook Author Page.

I wrote a full-length biography of forgotten Star Trek writer-producer Gene L. Coon, a man who has been obscured in the franchise’s history. While many extoll the virtues of Gene Roddenberry and his, “vision of the future’’, Coon is the man who created the nuts and bolts of the fictional universe we see today.

To be fair, Gene Roddenberry and his associate producer John D.F. Black brought Star Trek’s initial concept to the screen. Yet many of the ideas didn’t take. Despite taking inspiration from Horatio Hornblower sea adventure tales, Westerns like Wagon Train, and the unaired pilot, “The Cage”, which resembled the classic sci-fi film Forbidden Planet, the first ten or so episodes were without much depth. Many of these featured supernatural beings of the week, mad scientists, and a space virus. However, one episode did introduce the Romulans.

Coon took over as writer-producer midway through Season 1. He first nixed a failing romance storyline between Captain James T. Kirk and Yeoman Janice Rand. He incorporated the more humanistic elements, such as giving villains a sense of dignity despite the terrible things they do. Displaying this in the Klingons in’’Errand of Mercy’’ and in Khan (co-created with Carey Wilber) in ’’Space Seed’’. He also reversed the role of the typical monster of the week by showing how humans harmed them and commented on the futility of war as in ’’A Taste of Armageddon’’. He expanded the concept of warp technology and created greater interaction between the three lead crew members with the level-headed Kirk settling arguments between the logical Mr. Spock and the emotion Dr. McCoy.

I’d heard of Coon over the years but noticed there wasn’t much written about him. My research involved combing newspaper archives such as The Los Angeles Times and The Beatrice Daily Sun, his hometown periodical. This is where I found details of his earlier life, including his stint singing on an Omaha, Nebraska radio station at the age of four. Along with his career as a pharmacist, trained during his Marine service in Korea, he also freelanced as a reporter, covering atomic bomb tests in Yucca Flats, Nevada.

Coon died on July 8, 1973, a year after Star Trek first became profitable in syndication and on the convention circuit. For many years, his name didn’t even get a mention until William Shatner’s memoir Star Trek Memoriescame out in 1993 in which he dedicated an entire chapter to Coon and his accomplishments on the series. Leonard Nimoy corroborated these claims is in his own 1995 tell-all I Am Spock, as did many behind the scenes personnel such as Herbert F. Solow and Robert H. Justman in Star Trek: The Real Story.

Coon was an amazing man who had much to do with what Star Trek became. Yet his premature death from throat and lung cancer and Gene Roddenberry’s self-promotion as the sole creator of Star Trek did much to conceal Coon’s legacy from the public. Gene L. Coon has only a few living relatives, and none of them receive royalties.

I’ve received both positive and negative feedback on the book in the few years since its release. Would also like to thank actor Jack Nolan for narrating the audiobook. My hope is those read or listen to the book will be enriched by the legacy Gene L. Coon left behind. So much of it belongs to him, despite his lack of recognition. Roddenberry was far from the only, ’’Great Bird of The Galaxy’’. It’s the story of a man who left behind a great body of work yet doesn’t get a lot of his due credit.

Gene Roddenberry has long been painted as the visionary who made Star Trek possible. Yet not much has been written on Gene L. Coon, the real workhorse behind the original series. This man built the universe around Roddenberry’s initial concept we all know today. He almost single handedly created the Klingons and had a hand in creating the franchise’s greatest villain…KHAN! Any notion of Starfleet Command, The United Federation of Planets, warp technology, and its fictional creator Zefram Cochrane all belong to him. Coon died from cancer at forty-nine, just as Star Trek got popular through reruns and conventions.