#COOKING WITH CLORIS--HISTORICAL MYSTERY AUTHOR D.S. LANG ON THE DONUT DOLLIES OF WORLD WAR I AND A DONUT RECIPE

Author D.S. Lang has been making up stories since she was a little girl. Along the way, she’s taught at the junior high, high school, and college level, and worked as a program coordinator, a golf shop manager, and an online tutor. Now, she spends much of her time reading, researching, and writing. Most recently, she has delved into the Great War era and the years immediately after it. Her Arabella Stewart Historical Mystery Series was inspired by her Great Uncle Brice who served in the American Expeditionary Force during World War One, and by her love of historical mysteries. Learn more about D.S. and her books at her website.

My Arabella Stewart Historical Mystery series is set shortly after the Great War (World War I). The main character, Bella, was a United States Army Signal Corps operator. Her childhood friend, Constable Jax Hastings, served as a lieutenant in the American Expeditionary Force.

In doing research for the series, I have found many interesting details to weave into the books. One involves “Donut Dollies.” The “Dollies” were active from World War I through the Vietnam War.

The “Donut Dollies” of World War I brought a taste of home to the American Expeditionary Force serving in the trenches of France. All were Salvation Army volunteers who were best known for providing coffee and donuts at the front, where they faced being gassed and bombed along with the troops. More than 100 ladies were involved.

Because the donut-making machine was yet to be invented (that happened in 1920), the women had to be creative in producing the fried concoctions. Sometimes, they used baking powder cans to cook the donuts, tin cans to cut them, and used artillery shells to roll out dough.

In addition to making donuts and coffee, the women mended uniforms, helped nurse the wounded, and wrote and read letters for illiterate soldiers.

The original Salvation Army recipe has very basic ingredients. Some were provided to the women; others (like eggs and fresh milk) were purchased from local farmers. The recipe is available from various sources. The following one is from https://centralusa.salvationarmy.org/metro/famous-donut-day-recipe/

Combine all ingredients (except for lard) to make dough.

Thoroughly knead dough, roll smooth, and cut into rings that are less than 1/4 inch thick. (When finding items to cut out donut circles, be creative! Salvation Army dohnut girls used whatever they could find, from baking powder cans to coffee percolator tubes.)

Drop the rings into the lard, making sure the fat is hot enough to brown the doughnuts gradually. Turn the donuts slowly several times.

When browned, remove donuts and allow excess fat to drip off.

The Salvation Army began conducting “Donut Day” in 1938. The event is still marked the first Friday in June. 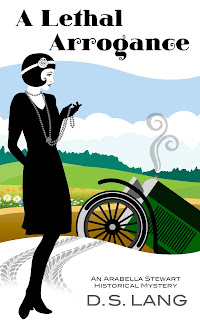 After returning home from serving in the Great War, Arabella Stewart’s goal, to save her family’s resort, seems within reach as the summer season progresses. She and her business partner look forward to re-establishing a successful championship golf tournament, once the signature event of the resort’s year. Trouble arises when a participant clashes with more than one person, including Bella’s best friend Ida Byington. When the man is found dead as the result of a suspicious automobile crash, Ida becomes a top suspect. Eager to clear her friend and ravel the mystery, Bella once again helps Constable Jax Hastings investigate and discover if the man fell victim to his own lethal arrogance.

Love the history lesson and the recipe.

Thank you, Kathleen! I love doing research for the series. I've never made donuts myself, but I may give these a try.