Mystery author Susan Oleksiw writes the Anita Ray series along with the Mellingham series, set on the New England coast. Her short fiction has appeared in Alfred Hitchcock Mystery Magazine and numerous anthologies. She is a co-founder of Crime Spell Books, which will continue the tradition of publishing Best New England Crime Stories with Bloodroot, due out in November 2021. Learn more about Susan and her books at her website and blog.

When I lived in India in the 1970s and again in the 1980s, I discovered much that was unexpected. Almost everyone knows about the gorgeous silks Indian artisans produce, or the finely crafted silver or gold jewelry. For my marriage, an Indian friend of my mother’s sent me a piece of red silk threaded with gold (red is the traditional color of wedding saris in North India) and a shawl threaded and tasseled with real gold. From my grandmother I inherited a shawl, probably owned by her mother-in-law, woven and embroidered in the Kashmiri durokhu style, in which the shawl is embroidered on two sides with the same design in different or the same colors.

But the handwork that surprised me was that produced by Catholic women at a local nonprofit overseen by my landlady. The women made various crafts for sale, including handkerchiefs embroidered with Indian women in various traditional costumes in one corner, replacing a monogram. I bought loads of them to give to friends, along with other goods.

When I returned to the States I brought with me a new love of needlework beyond sewing (and my attempts as a child), and began doing needlepoint, again to give to family and friends, and later embroidery. My first project, however, was a free-hand image. One night in the middle of winter, I was sick of the cold, the gray, the general gloom of January in New England and pulled out a frame and fabric, and went to work. (see above Indian scene) I missed Kerala.

I don’t claim any great skill. But I’m always willing to learn and try something new, including mastering various stitches. During the pandemic I’ve been working sporadically on a sampler. Sometimes I think of this as a way to decompress from the stress of the pandemic, or a way to let my mind wander while I’m in the middle of a novel or story that isn’t going well. But lately, I’ve had the same image come to me while I’m working, and now I think I know what it is. Look for Anita Ray to solve a murder using a hotel guest’s embroidery.

Until that story is written and published, look for the fourth book in the Anita Ray series, When Krishna Calls, soon to be available in trade paperback and ebook. 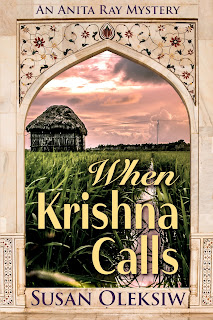 Anita is dismayed when an employee disappears and is later accused of murdering her husband, who was involved with a loan shark. But things get worse when she learns that Auntie Meena has taken out a crushing loan and tried to keep it a secret. How far will Anita go to protect her aunt and her home, and to rescue an innocent woman?

Thanks, Mary. I'm enjoying working on it.