I’ve always heard you should write what you know. Naturally, that can’t always happen, but sometimes it works out. A lot of us have some entertaining interests, and one of the things my husband and I love is sailing.

My recently released historical romance Duchess Deceived includes sailing scenes inspired by the adventures I have had with my very competent sailor husband. We have raced over the frothy waves to beat a dark, thundering storm behind us. We have battled tides and winds for exhilarating, unexpected rides into safe harbors.

Duchess Deceived includes a wild sail across the Bristol Channel as our hero and heroine race against time. The Bristol Channel’s tides can be compared to the similarly huge tides in the Bay of Fundy in Nova Scotia where within hours boats go from bobbing peacefully on the water to being moored on the sand! I have been lucky enough to see the strength of the Bay of Fundy tide as it comes in—and goes out. The moving water held me spellbound, just staring as it came in fast enough to cover a stone in minutes. It inspired me so much, I was determined to capture that power in my debut romance.

Our heroine in Duchess Deceived, Juliana, does not want to go anywhere near the Bristol Channel because, as the result of an event in her childhood, she fears the water. The wild ride in this book helps Juliana overcome that fear. That result might sound unlikely, but when I faced my first storm on a sailboat, I was pretty scared. I found, though, that riding out a storm with someone who knows what they are doing, is careful and attentive about it, and actually enjoys themselves while doing it helped me overcome my fear. Later, when we raced ahead of a different storm, we ended up having a rollicking good time.

*Photo 1: This is a picture taken near Brier Island, which is far south in the Bay of Fundy, so does not even experience the full extent of its tides, yet a boat is resting on the bottom – and the water is far out.

*Photo 2: This picture of a pier shows how high they must be built to accommodate the tides. Again, this is not even at the northern end of the Bay of Fundy! 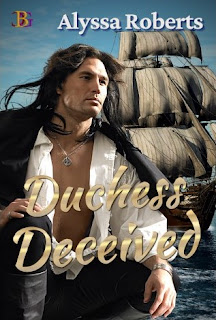 Widowed duchess Juliana Barrington fears that men who covet her son’s title are trying to kill him. When greedy relatives discover her whereabouts, she flees her seaside hideout. Will she be running forever?

Ransom Wolfe Hawkins, a Royal Navy officer in hiding, wants to protect Juliana and her son, but fears he'll lose her trust if she learns he's been accused of murder. Will he have to choose between clearing his name and protecting the woman he loves?

Or will he deceive the Duchess?

Would love to visit the Bay of Fundy! Our little Catboat would do well there, as our boat is shallow and wide.

This makes me want to visit the Bay of Fundy and learn to sail!

Happy Aphasian,
I think it would be a wild ride! And a Catboat sounds like good fun, there and elsewhere.

Happy Aphasian,
I hope you get to visit the Bay of Fundy - it is beautiful. And if you sail there, please post photos!